A Michigan professor asked a judge Wednesday to immediately reinstate him, two weeks after he was suspended for making a sarcastic video for students that included profanity and criticism of Ferris State University's COVID-19 policies.

“COVID-19 is deadly. But at Ferris State University, freedom of speech and academic freedom are deadlier,” they said in a request to return Mehler to teaching history. 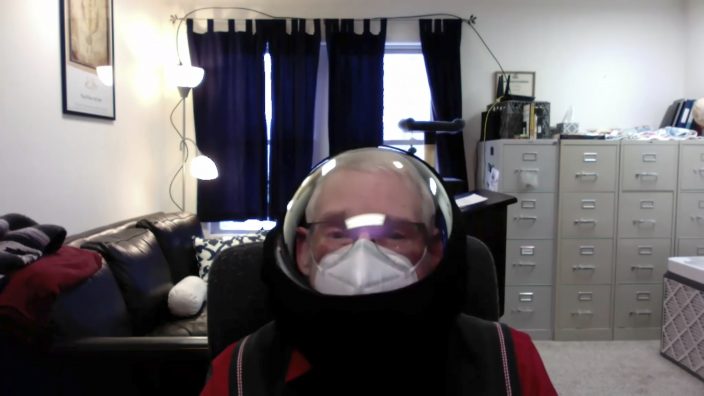 This image from video provided and taken by Barry Mehler shows Mehler during a 14-minute YouTube video at the start of a new term at Ferris State University. Mehler, a professor who was suspended after making a provocative video for his students, is threatening to file a lawsuit if Ferris State University, located in Michigan, doesn't lift the sanction. (Barry Mehler via AP)

In a 14-minute video at the start of a new term, Mehler, 74, covered a range of topics, including grades, attendance, plagiarism, COVID-19 and the HBO series “Deadwood.”

He frequently dropped in profanities and told students — whom he called “vectors of disease” — they could skip in-person classes and still get a good grade by following course requirements posted online. The video has been seen more than 500,000 times on YouTube.

“If you won’t expose your grandpa to a possible infection with COVID then stay... away from me,” Mehler said.

“I will not take questions in class because I’m wearing this... helmet in order to stay alive,” he added, a reference to a $300 astronaut-style helmet with air filters.

Mehler was suspended with pay on Jan. 11 and told that he was being investigated for violating the university's employee dignity policy. President David Eisler said he was appalled by the video.

In a filing in federal court, Mehler's attorneys said the professor was speaking about matters of public concern.

“These were irreverently made for the purpose of informing the public debate — making his students think critically about the issues of the day,” Matthew Hoffer wrote.

An email seeking comment was sent to a Ferris State spokesman.

Mehler recently told The Associated Press that he was performing when he used provocative language in the video.

“If a professor comes in and he’s all high and mighty and using words they don’t understand — that doesn’t help them relax and think,” he said of students.