Another journalist was attacked Wednesday in Mexico, where three have been killed so far this month.

The human rights office of the southern state of Oaxaca confirmed that armed assailants opened fire on a car carrying Jose Ignacio Santiago.

The office said it had spoken with Santiago and that he survived the attack unharmed, but offered no further details. State prosecutors also confirmed the attack. 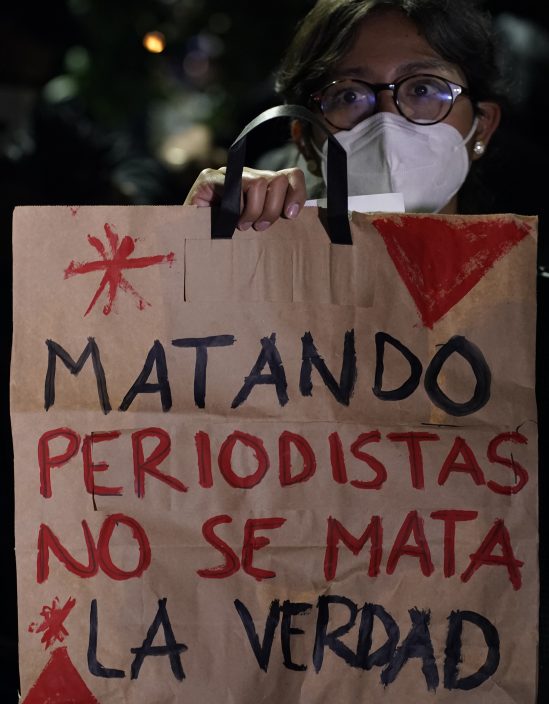 A woman holds a sign that reads in Spanish "You do not kill the truth by killing journalists," during a national protest against the murder of journalist Lourdes Maldonado and freelance photojournalist Margarito Martínez, in Mexico City, Tuesday, Jan. 25, 2022. Mexico's Interior Undersecretary Alejandro Encinas said recently that more than 90% of murders of journalists and rights defenders remain unresolved, despite a government system meant to protect them. (AP PhotoEduardo Verdugo)

Local media reported that Santiago had bodyguards provided under a government program to protect threatened journalists. They said those body guards helped Santiago resist and escape the attack.

Santiago is the director of an online news site that frequently reports on crime.

The attack comes one day after press groups held more than a dozen demonstrations throughout Mexico Tuesday to protest the killings of three journalists since the start of the year.

In the border city of Tijuana, two journalists were killed in the space of a week. On Jan. 17, crime photographer Margarito Martínez was gunned down outside his home. And on Jan. 23, reporter Lourdes Maldonado López was found shot to death inside her car.

On Jan. 10, reporter José Luis Gamboa was killed in the Gulf coast state of Veracruz.

Officials have acknowledged that more than 90% of murders of journalists and rights defenders remain unresolved, despite a government system meant to protect them.

“What they give us is a damned panic button, and you know what that button is? It is the number of the municipal police supervisor who is corrupt and sold out,” Sanchez said.

Mexico remains the most dangerous place in the Western Hemisphere for journalists. Almost 50 journalists or media workers have been slain in Mexico since December 2018.