With the sting of his team’s crushing playoff exit still fresh in his mind, Buffalo general manager Beane has been unable to muster the strength to re-watch the Bills’ divisional round loss to the Kansas City Chiefs.

“I haven’t slept much,” Beane said. “So I’ve thought about it a lot. I can’t watch it right now.” 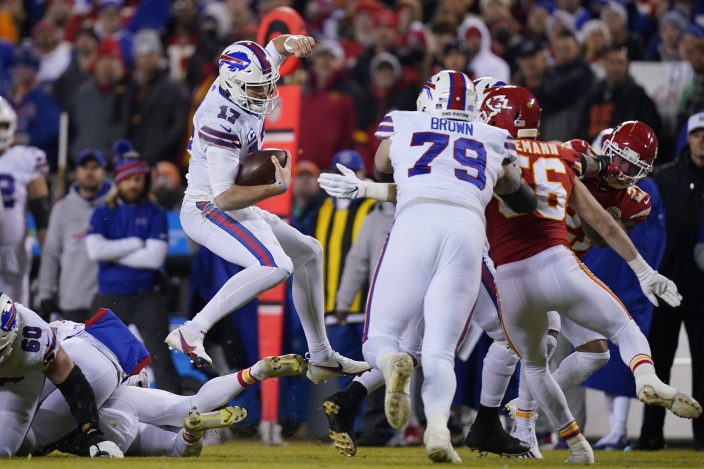 As disappointed as Beane is, he still believes his team has taken a step in the right direction. Speaking at his end-of-season press conference Wednesday, Beane notes the Bills have moved forward after coming 13 seconds short of making a second consecutive trip to the AFC championship game.

“There’s nothing I can tell you that’s going to fix it. We have to learn from it,” Beane said. “I truly believe if we played them 10 times, it’s probably 5-5. And that’s my heart of hearts. They may think different, that’s how I see it. If we had just finished that game the way we know how, we’re not sitting here right now, we’re preparing for another one. 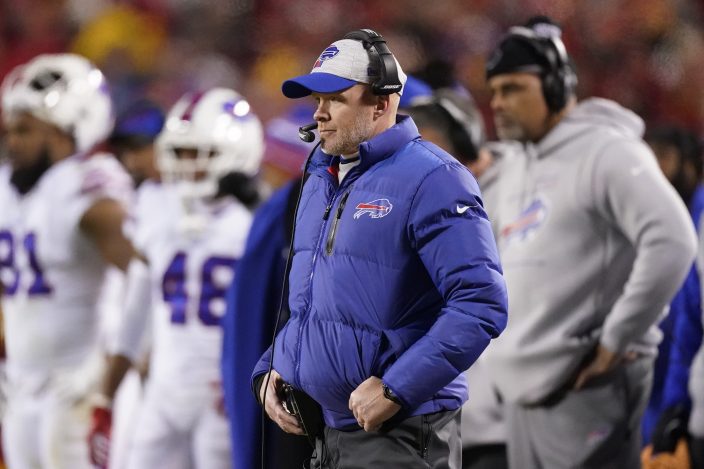 Buffalo Bills head coach Sean McDermott watches from the sideline during the first half of an NFL divisional round playoff football game against the Kansas City Chiefs, Sunday, Jan. 23, 2022, in Kansas City, Mo. (AP PhotoCharlie Riedel)

"I think we took some steps in the right direction, even though we didn’t make it as far as we did a year ago.”

The biggest reason for optimism in Buffalo remains quarterback Josh Allen. In proving his breakout campaign last season was no fluke, Allen finished his postseason in prolific fashion. The young passer was essentially flawless in putting together back-to-back record-breaking performances. Against New England and Kansas City, Allen combined for 637 yards passing, nine touchdowns and no interceptions.

Those standout performances came after the Bills made Allen one of the highest paid players in the league before the start of the regular season.

“I do love the guy, I’ll start there,” Bills coach Sean McDermott said. “And now he’s answered all those questions, right? I’m extremely proud of what he’s been able to do this past season and just his growth over the years. Just because you have the guy on one hand doesn’t mean that you’re going to get there, right? But having that guy is hard to find. A lot of GMs, a lot of teams that search high or low for ‘that guy.’ And I believe without a shadow of a doubt we have that player, that person. So that’s good to know. And now we have to continue to move strategically around him to further our team moving forward.”

With an eye on the team’s long-term viability under the salary cap, Beane said he does not expect the Bills to be big spenders in free agency. He is, however, looking to retain some of Buffalo’s free agents and target specific areas of need. The bulk of Buffalo’s upcoming free agents are on the defensive side with cornerback Levi Wallace, end Jerry Hughes and tackle Harrison Phillips set to hit free agency.

“We now have paid Josh. Which is good, because I know what his number is on the books for the upcoming years and we can just build around it,” Beane said. “(The salary cap) is not going to be perfect for us, but it’s going to be better. We’ll have to make some moves, but I wouldn’t see us being big spenders or anything like that. But we’ll definitely look to fill some spots from the outside as well as retain some of our guys.”

Beane said he anticipates wide receiver Cole Beasley to return in 2022. Beasley came under fire for his outbursts against vaccines and the league’s COVID-19 policies but remained a weapon for the Bills on the field. He finished the season with 82 receptions, tying his career best from last season. Beasley is entering the final year of a four-year deal he signed with Buffalo in 2019.

Beane also said he would like to see a change in postseason overtime rules. The Bills lost to the Chiefs after Kansas City scored on the first possession, and Allen and the Bills' offense never got the opportunity to respond.

“At the end of the day, we lost the game the other night,” Beane said. “But of course we would’ve loved to, I think the TV audience would’ve loved to, have seen Josh and our offense get it back. I would definitely love to see it brought back to the table. I’m not saying I have the exact idea, but I think there’s some ways to do it.”