Within hours of Russian authorities officially adding Alexei Navalny to the country’s registry of terrorists and extremists, a new documentary about the imprisoned Russian opposition leader premiered at the Sundance Film Festival.

"Navalny” was dramatically added to the festival at the last minute, and announced just the day before it premiered virtually Tuesday evening at Sundance. Directed by Daniel Roher, the film was made with Navalny, Russian President Vladimir Putin’s fiercest critic, in late 2020 and early 2021 while he recuperated in Germany after an attempted assassination with nerve agent poisoning.

Navalny has said the Kremlin was responsible, as have American intelligence officials and media reports that traced the agents who attacked Navalny to Russia's Federal Security Service. The nerve agent used in the attack, Novichok, is a Cold War relic that Russia has used before on dissidents. Russian authorities have denied it. 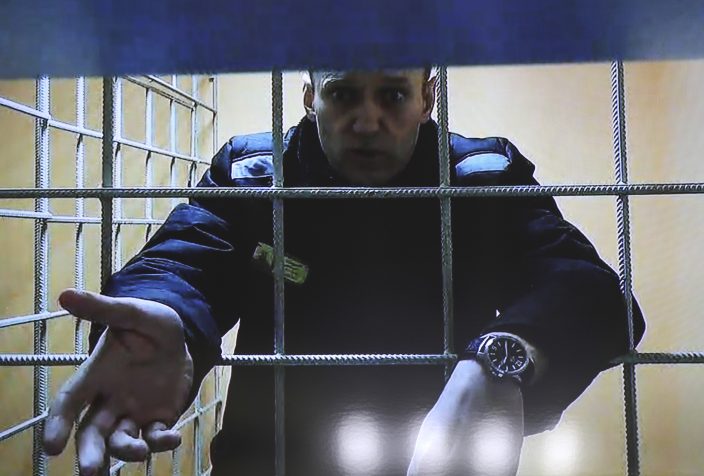 FILE - Russian opposition leader Alexei Navalny gestures as he speaks via a video link from a prison during a court session in Petushki, Vladimir region, about 120 kilometers (75 miles) east of Moscow, Russia, Tuesday, Dec. 28, 2021. Russian authorities have added imprisoned opposition leader Alexei Navalny and some of his top allies to the registry of terrorists and extremists, the latest move in a multi-pronged crackdown on opposition supporters, independent media and human rights activists. Existing laws require freezing the bank accounts of those on the list. (Evgeny FeldmanMeduza via AP, File)

“Navalny," which HBO Max and CNN will distribute later this year, had been kept under wraps until earlier this month. During the film's making, its team referred to it under the working title “Untitled LP9." Producers said that alluded to a nickname they've seen Russia's security agency use for Novichok: “Love Potion No. 9.”

The film's premiere came smack in the middle of an inflection point for Russia. “Navalny” debuted while pressure was ratcheted up on Navalny, who has been jailed for more than a year, and while tensions are escalating over Russia’s troop buildup along Ukraine’s borders.

For the Canadian filmmaker Roher, those circumstances make “Navalny” — the most high-profile non-fiction close-up of a pivotal political figure — urgent. 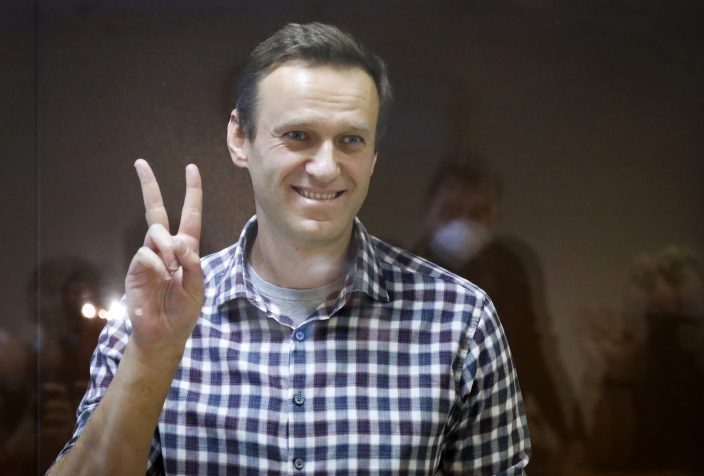 FILE - Russian opposition leader Alexei Navalny gestures as he stands in a cage in the Babuskinsky District Court in Moscow, Russia, Saturday, Feb. 20, 2021. Russian authorities have added imprisoned opposition leader Alexei Navalny and some of his top allies to the registry of terrorists and extremists, the latest move in a multi-pronged crackdown on opposition supporters, independent media and human rights activists. (AP PhotoAlexander Zemlianichenko, File)

“The more his name is in the headlines, the more magazine covers he’s on, the more people this film reaches, the safer he will be,” Roher said in an interview Wednesday. “It will be harder for the regime to murder him in prison if he is occupying space in the global conversation. I think that’s what our film seeks to do: To make sure his name is front and center.”

When the film was first announced, Navalny posted on Instagram that he had hoped to attend the film's premiere in a tuxedo and with a glass of champagne.

“But I will spend it — as usual — in boots, a prison uniform and with a mug of tea," said Navalny, who is serving 2 1/2 years in prison for violating the terms of a suspended sentence stemming from a 2014 fraud conviction. On Tuesday, the U.S. State Department called the terrorist designation of Navalny “troubling” and a “new low” in the government’s moves against opposition figures.

Roher's documentary, a real-life “Bourne”-style thriller, leads right up Navalny's arrest in January 2021 when he flew back to Moscow to reestablish his political campaign to return democratic elections to Russia and unseat Putin. Mass protests and a nationwide crackdown followed.

In between, he and Bulgarian journalist Christo Grozev of the digital investigative website Bellingcat worked to uncover details of the nerve agent attack including the individuals who carried it out. In the film's most remarkable sequence, Navalny calls several of his potential assailants directly. In one prank call, he poses as an angry superior and is told thorough details of the mission.

“I remember sitting there being like, 'OK, We’ve got enough battery in the camera. We’re still rolling. He’s in focus. Hold it steady. Focus on the action, focus on the faces, focus on the eyes. Just keep filming,'” said Roher. “I understood immediately that this was the most important thing that I would ever film in my life.”

Roher didn't know exactly what the conversation was at the time, since it was in Russian, but noticed Navalny's investigative chief Maria Pevchikh's jaw drop. Afterward, he learned what he had captured.

“We were running like chickens with our heads cut off. I was yelling at Odessa (Rae), the producer, to call the police and get protection to the house,” says Roher.

But the episode also crystalized something else for the filmmaker.

“These guys are morons. As indicated in the film, they get on a phone and just spill the whole plot to murder Navalny," said Roher. "I'm probably super naive and have no idea what's coming down the pike for me, especially as this film proliferates in the world. But these guys don't seem like the swiftest dudes.”

Navalny’s daughter, Daria, attended a screening of the film Tuesday night in Los Angeles. During a Q&A streamed after the premiere she said: “My dad is doing OK. He’s excited to see the movie, if he ever gets to.”