The founder and leader of the far-right Oath Keepers militia group must remain behind bars until he goes on trial on sedition charges arising from last year's assault on the U.S. Capitol, a federal magistrate ruled Wednesday.

Stewart Rhodes had been jailed sincehis Jan. 13 arrest on charges that he plotted with others to attack the U.S. Capitol on Jan. 6, 2021, to stop Congress from certifying President Joe Biden’s 2020 election victory.

In a 17-page opinion, U.S. Magistrate Judge Kimberly Priest Johnson concluded that no bail conditions would either assure public safety or that the 56-year-old Granbury, Texas, man would made court appearances. 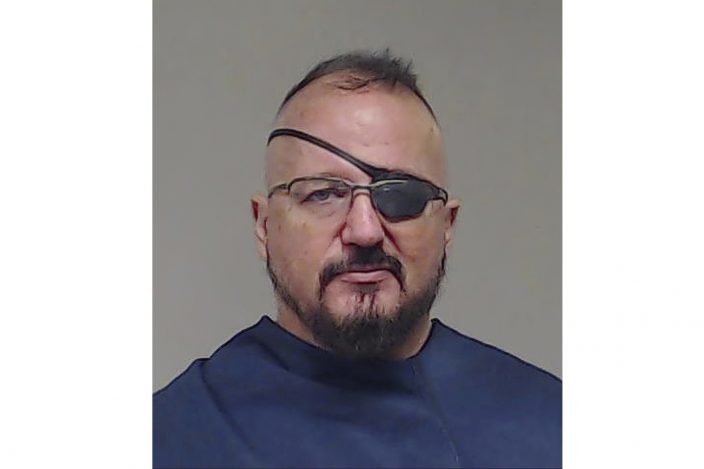 This photo, provided by the Collin County Sheriff's Office shows Stewart Rhodes. Prosecutors have filed seditious conspiracy charges on Thursday, Jan. 13, 2022, against Rhodes, the leader of the far-right Oath Keepers militia group and 10 suspected associates. The seditious conspiracy case filed this week against members and associates of the far-right Oath Keepers militia group marked the boldest attempt so far by the government to prosecute those who attacked the U.S. Capitol during the Jan. 6 riot. (Collin County Sheriff's Office via AP)

Prosecutors had urged Rhodes’ continued detention, while his attorneys urged that friends or relatives have custody. Rhodes’ attorneys, James Lee Bright and Phillip Linder, did not immediately respond to requests for comment Wednesday night but have previously said they would appeal a decision to hold their client ahead of trial.

Rhodes and 10 others were the first to be charged with sedition for their roles in the Jan. 6, 2021, Capitol riot in which five people died. A federal indictment alleges Oath Keepers for weeks discussed trying to overturn the election results and preparing for a siege by purchasing weapons and setting up battle plans.

The indictment against Rhodes alleges Oath Keepers formed two teams, or “stacks,” that entered the Capitol. The first stack split up inside the building to separately go after the House and Senate. The second stack confronted officers inside the Capitol Rotunda, the indictment said. Outside Washington, the indictment alleges, the Oath Keepers had stationed two “quick reaction forces” that had guns “in support of their plot to stop the lawful transfer of power.”