Top-ranked Jon Rahm closed with an eagle on the tougher South Course at Torrey Pines for a 6-under 66 on Wednesday, trailing leader Billy Horschel by three strokes after the first round of the Farmers Insurance Open.

Horschel shot a bogey-free 9-under 63 on the North Course and led Michael Thompson by one stroke. Of the 30 players who shot 67 or better, 26 played the North. Rahm's was the best score on the South by one over Luke List, Peter Malnati and Cameron Tringale. The players switch courses Thursday and play the final two rounds on the South.

Taking advantage of the North's shorter distances and more forgiving rough, Horschel made five birdies on the front nine, highlighted by a 25-foot putt on the par-4 second hole. The 35-year-old from Florida is seeking his first non-match play victory on the PGA Tour since April 2018. 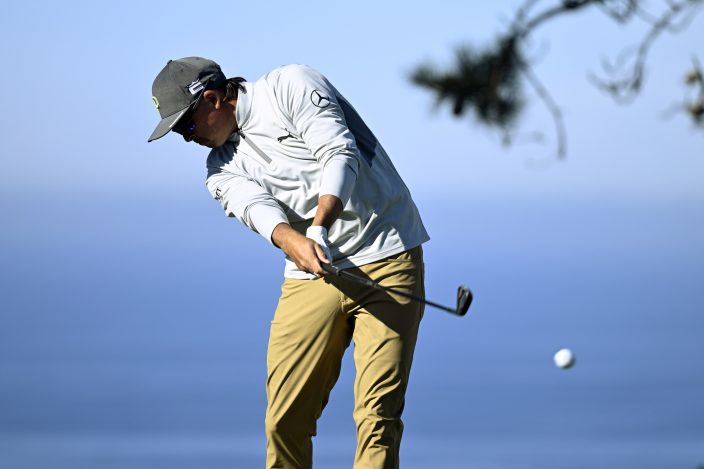 Rickie Fowler hits his tee shot on the 11th hole of the North Course at Torrey Pines during the first round of the Farmers Insurance Open golf tournament, Wednesday, Jan. 26, 2022, in San Diego. (AP PhotoDenis Poroy)

“I told my caddie, ‘Let’s just go out there, no expectations, and just enjoy,’” Horschel said. “And I think we did a really good job of that. My game is in a really good spot.”

Thompson also played bogey-free, putting him one shot ahead of Stephan Jaeger and Kevin Tway.

Rahm's strong start in San Diego is no surprise: The world No. 1 got his first PGA Tour victory at Torrey Pines in 2017, and he won last year's U.S. Open on the South Course for his first major. 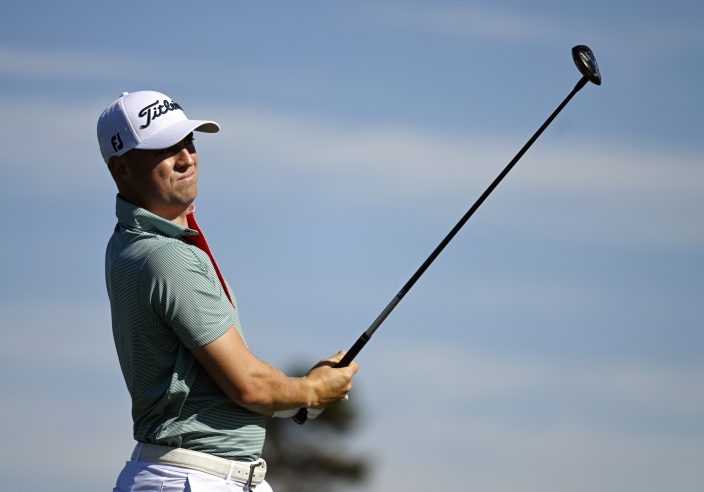 Justin Thomas watches his tee shot on the second hole of the South Course at Torrey Pines during the first round of the Farmers Insurance Open golf tournament, Wednesday, Jan. 26, 2022, in San Diego. (AP PhotoDenis Poroy)

“Doesn’t shock me,” Horschel said when told of Rahm's impressive round. “I think he won a U.S. Open on that course, last I checked. He’s a really good player. There’s a reason why he’s the No. 1 player in the world.”

Rahm said the conditions were “relatively easy,” even on the South. He stumbled with two bogeys on the back nine before finishing strong, crushing a 280-yard approach shot on the par-5 18th to 12 feet for eagle. 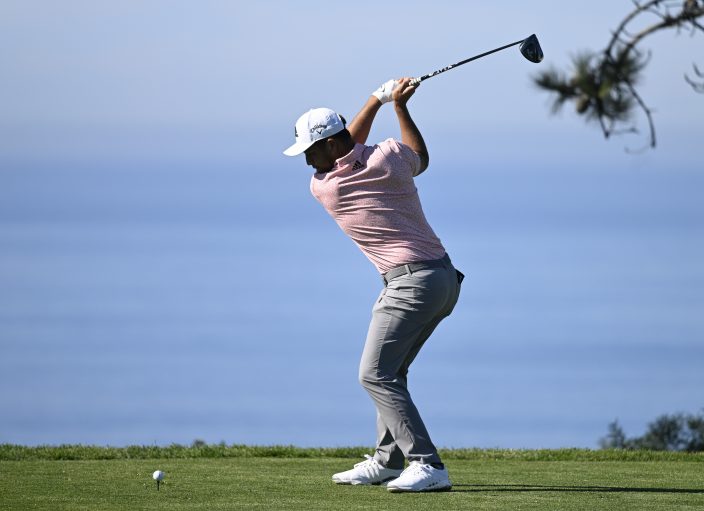 Xander Schauffele hits his tee shot on the 11th hole of the North Course at Torrey Pines during the first round of the Farmers Insurance Open golf tournament, Wednesday, Jan. 26, 2022, in San Diego. (AP PhotoDenis Poroy)

“It was probably one of the best swings I’ll make all year,” Rahm said. “That 3-wood was absolutely perfect.”

Horschel tied for 36th at the Sony Open in Hawaii two weeks ago, but he nearly had to skip Torrey Pines because of a persistent upper-body muscular injury that has required daily treatment. He didn’t decide to play for sure until he felt good when he woke up on Wednesday morning.

“Thankfully (with) all the work we’ve done and everything I felt, it never got any tighter,” Horschel said. “It’s actually felt like it’s a little bit looser right now. Hopefully we got through the tough of it and now we’re on the downhill side and I don’t have to worry about it anymore.”

Horschel, who won the BMW PGA Championship in England last September on what is now called the DP World Tour, had two top-10 finishes in his first 11 career starts at Torrey Pines. His excellent start came two days after he dressed up as a human target and allowed kids to hit balls at him in a stunt widely enjoyed on social media.

Thompson is seeking his first win since July 2020, and he played another excellent round after finishing in a fifth-place tie at the Sony Open. Thompson is a PGA Tour veteran, but he is getting plenty of double-takes around the tour while rocking a thick, long beard that he started growing before last year's playoffs.

“I haven’t been mistaken for anybody,” said Thompson, whose wife told him to keep the look. “It’s just more people think I’m a rookie because I look so different. You know, I’ve probably gotten more comments of, ‘What hockey team do you play for?’"

The Farmers Insurance Open being played Wednesday through Saturday to avoid a television conflict with the NFL's two conference championship games on Sunday.

Zalatoris, Day charge past Rahm to share lead at Farmers

No. 1 Rahm shares lead with Thomas, Schenk at Torrey Pines