Antonee Robinson broke through a freeze in the air and the U.S. offense, scoring a big goal in the 52nd minute that lifted the Americans over El Salvador 1-0 on Thursday night and kept them on track for a return to the World Cup.

The narrow victory on a 29-degree night that tied the record low temperature for a home American qualifier boosted the U.S. to 18 points with five games left.

The U.S. has two more chilly matchups in the next week and can move to the verge of a berth with victories on Sunday against Canada in Hamilton, Ontario, and Wednesday against Honduras at St. Paul, Minnesota. The final three qualifiers are in March. 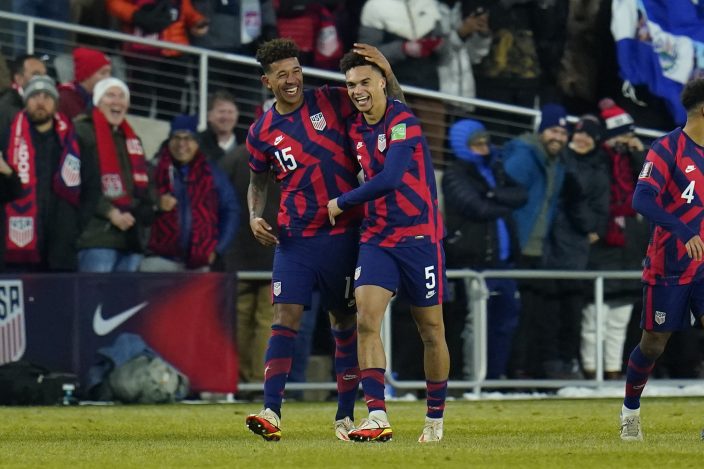 Mexico has 17 points after beating Jamaica 2-1 on Thursday night. Canada began the night with 16 points going into its game at Honduras, and Panama had 14, followed by Costa Rica with nine. El Salvador is left with six and has virtually no chance to reach this year’s tournament in Qatar.

The top three nations qualify, and the fourth-place team advances to a playoff against the Oceania champion, likely New Zealand. Winning home games is a key, and the Americans have won four of five matches on U.S. soil, stumbling only in a draw against Canada in September.

Robinson scored after Weston McKennie played a long ball down the right flank to Tim Weah, who let it bounce three times as he ran past Roberto Domínguez and Eduardo Vigil. 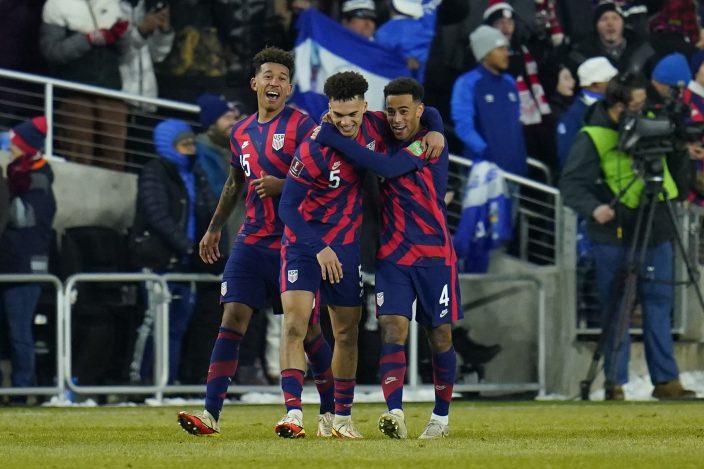 Goalkeeper Mario González made a sliding block, and the ball rebounded to Jesús Ferreira. He headed it across the goalmouth and Christian Pulisic let the ball bounce past him to Robinson, who kicked it in with his left foot from 8 yards for his second international goal. Robinson did a forward flip and a backflip to celebrate, adding to the backflip he performed after scoring the tying goal in the 4-1 win at Honduras in September.

Matt Turner took over in goal from Zack Steffen, who remained in England because of a bad back, and didn’t have to make a save. Turner played following reports he will move next summer from New England to Arsenal.

The U.S. Soccer Federation scheduled the match in a cold climate to minimize travel and put the chill on El Salvador, which went to a sporting goods store to purchase additional winter gear. 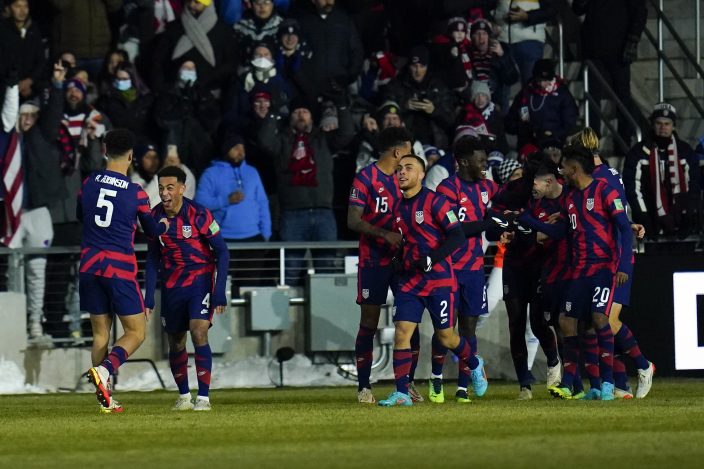 The Americans’ 15th straight home win over El Salvador since 1989 didn’t come easily. They outshot El Salvador 8-3 in the first half but put none on target. But the offense followed its pattern: The U.S. has scored 11 of its 13 goals in the second half.

El Gráfico, a Salvadoran sports newspaper, headlined the match “En una hielera.” Translation: “In a freezer.” Snow flurries fell during warmups and the temperature was the same as for the “Guerra Fria” win over Mexico at old Columbus Crew Stadium in February 2001 and the Snow Clasico victory over Costa Rica at Commerce City, Colorado, in March 2013. 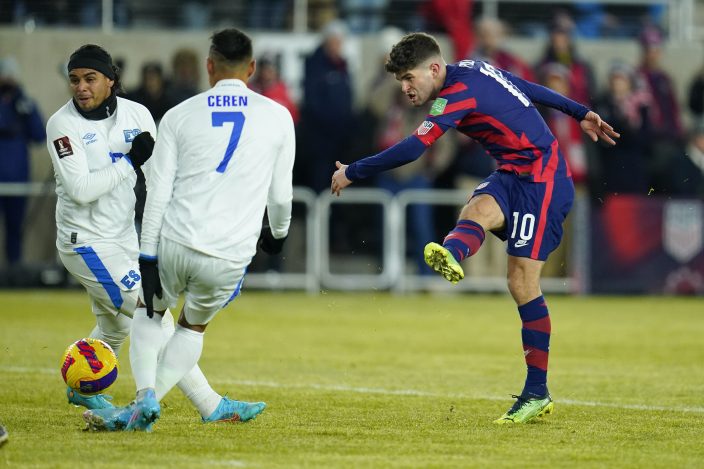 U.S. players has electric heated cushions on the bench and refreshments of chicken broth and cider. The locker room temperature was set unusually low to acclimatize the team.

Defenders Walker Zimmerman and Chris Richards were the only starters for either team to wear short sleeves.

About 12 minutes in, El Salvador’s Enrico Hernández went to the bench and took off his thermal underwear. 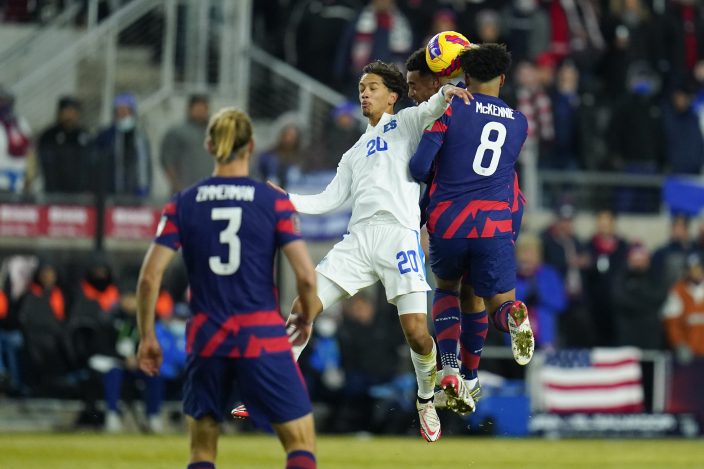 El Salvador's Enrico Duenas (20) goes up for the ball against United States' Weston McKennie (8) and Tyler Adams, back, during the first half of a FIFA World Cup qualifying soccer match, Thursday, Jan. 27, 2022, in Columbus, Ohio. Walker Zimmerman (3) looks on. (AP PhotoJulio Cortez)

Pulisic, McKennie and Tyler Adams started together for just the second time, the first time since a March 2019 exhibition against Ecuador. Ferreira was a surprise pick at forward over Ricardo Pepi, scoreless in 12 matches for club and country since Oct. 7.

Ferreira was high with an angled 10-yard shot with his left foot in the 16th minute. The best U.S. chance of the first half came three minutes later, when Adams, Musah, Sergiño Dest and Weah combined on a quick attack that left Ferreira open in front of González only to misfire over the crossbar with his right-foot flick. 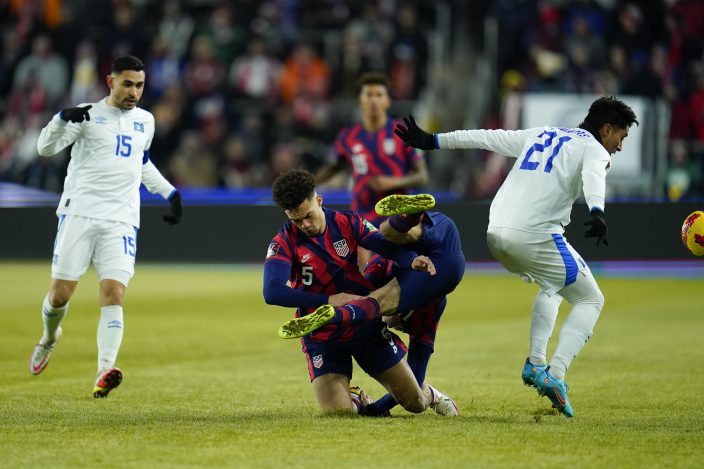