The rockets fired in the early morning landed on planes parked in a waiting area of Iraqi Airways, the country's national carrier, the statement said. One rocket punched a gaping hole in the cockpit area of the plane.

The attack marks an escalation of a series of rocket and drone strikes that have targeted the U.S. and their allies as well as Iraqi government institutions since the start of the year. Most attacks targeting the airport did not cause heavy damage or affect civilian areas of the airport facility. 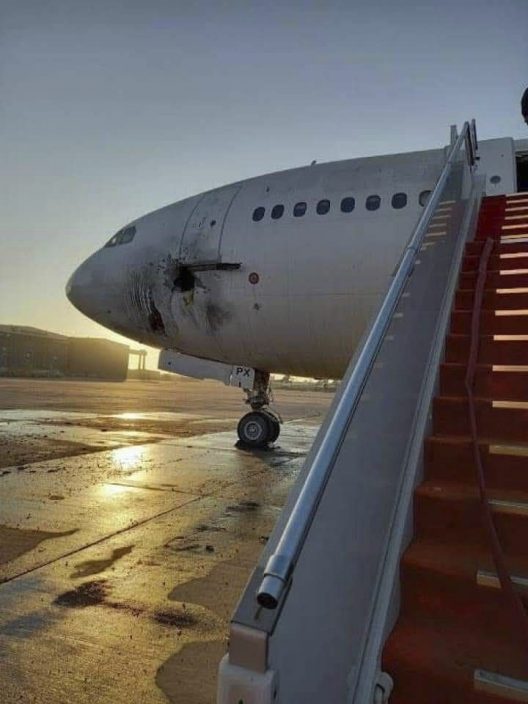 This photo from the media Office of the Ministry of Transport shows a damaged aircraft on the tarmac of Baghdad airport, after a rocket attack in Baghdad, Iraq, Friday, Jan. 28, 2022. At least three rockets struck near Baghdad's international airport and an adjacent military base that hosts U.S. and other coalition advisors on Friday, damaging an abandoned commercial plane but causing no casualties, Iraqi officials said. (The Ministry of Transport media Office via AP)

The military said launch pads for the missiles had been located in the nearby Abu Ghraib area.

The airport contains an Iraqi military base that hosts U.S. and other coalition advisors.

The rockets landed between the civilian and military areas of the airport, two security officials said on condition of anonymity because they were not authorized to brief the press.

The airline said in a statement that the attack had damaged one of its out-of-service planes parked near the airport but that operations were running normally and no delays were expected.

Iraqi Prime Minister Mustafa al-Kadhimi condemned the attack, calling it an attempt “to undermine Iraq's reputation, that we have endeavoured to restore in the region and internationally.”

The attack on the airport aimed to undermine confidence in Iraq's security, as well as impede the work of the airline, according to the Iraqi military and the prime minister. Al-Kadhimi called on Iraqi political parties to unequivocally condemn the attack and support Iraqi security forces in the search for those responsible.

Their silence over the frequency of attacks has served as a cover for perpetrators, al-Kadhimi said. He also called on the international community not to place restrictions on travel to Iraq as a result of the attack.

The U.N. condemned the rising number of “despicable” attacks in a statement urging political actors to act together and expose the culprits.

Pro-Iran Shiite factions in Iraq have vowed revenge for Soleimani’s killing and have conditioned the end of the attacks on the full exit of American troops from the country.