BETTING LINE: Chiefs by 7, according to FanDuel SportsBook. 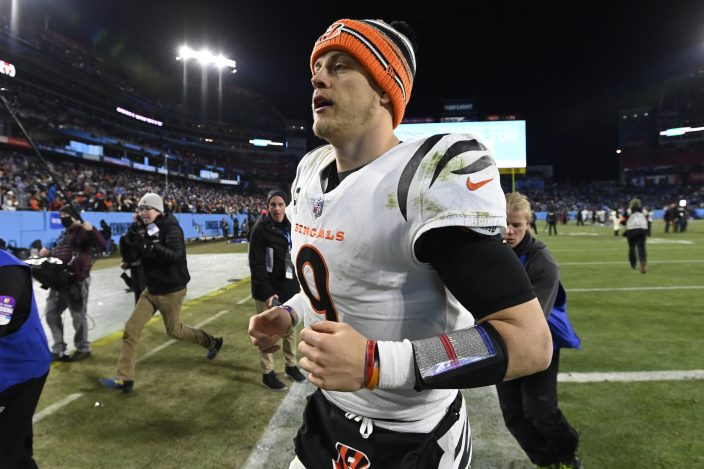 BENGALS PLAYER TO WATCH: WR Ja'Marr Chase made just about every defense look foolish this season, catching 81 passes for 1,455 yards and 13 touchdowns. A disproportionate number of all those came in Week 17 against Kansas City, when Joe Burrow found him 11 times for 266 yards and three TDs in a 34-31 win. 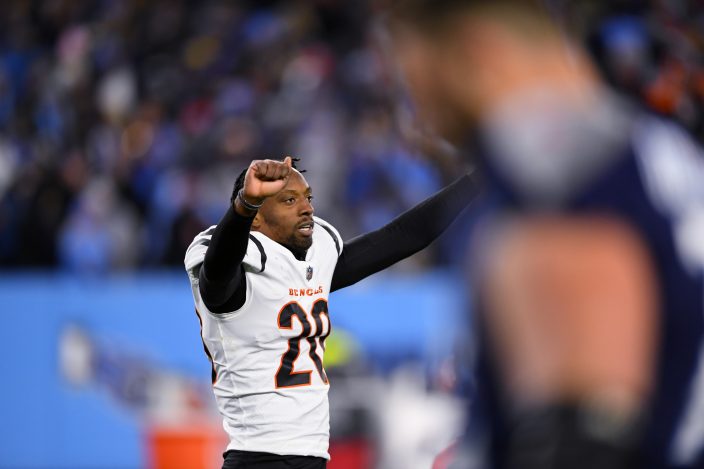 CHIEFS PLAYER TO WATCH: CBs Charvarius Ward and L'Jarius Sneed need to play better than they did last week against Buffalo, when Josh Allen shredded them in the second half of a shootout. That's because they won't just be dealing with Chase but also Tee Higgins and Tyler Boyd.

KEY MATCHUP: Chiefs QB Patrick Mahomes against the Bengals' poorly ranked pass defense. Mahomes had a relatively pedestrian game, at least by his standards, with 259 yards passing and two TDs against Cincinnati near the end of the regular season. So far, Mahomes has thrown for 404 yards and five TDs against Pittsburgh and 378 and three TDs against Buffalo in the playoffs. 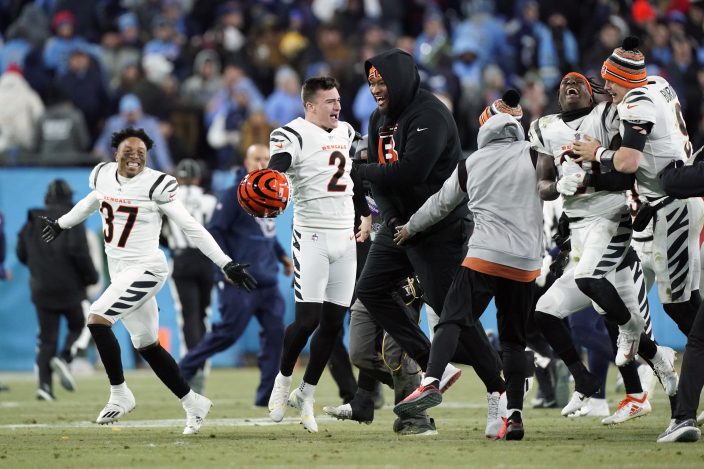 SERIES NOTES: The Bengals have won five of their past six games with Kansas City, including their matchup earlier this season. But their last trip to Arrowhead Stadium in October 2018 ended with a humiliating 45-10 loss. This will be the first time the teams have met in the postseason. The expansion Bengals’ first game of any kind was against the Chiefs in the preseason on Aug. 3, 1968, at Nippert Stadium on the University of Cincinnati campus; the Chiefs won, 38-14.

STATS AND STUFF: The AFC North champion Bengals beat the Raiders 26-19 in the wild-card game, then needed a winning 52-yard field goal from rookie Evan McPherson to beat top-seeded Tennessee last Saturday. ... The AFC West champion Chiefs are hosting a championship game for a record fourth straight year. The Raiders (1973-77), Bills (1990-93) and Patriots (2011-18) are the only others to make at least four straight title game appearances. ... Kansas City is trying to reach its third straight Super Bowl, which would match the second-longest streak in NFL history. ... The Raiders win was the first in the postseason for the Bengals in three decades. The win at Nashville was their first on the road in the playoffs in team history. ... The AFC championship appearance is the first for the Bengals since they advanced to the Super Bowl after the 1988 season, where they lost to San Francisco. ... The Bengals had the fewest penalties yards (620) in the regular season and were second in number of penalties (72). ... McPherson is 8 for 8 in two playoff games. ... Chase's regular-season total of 1,455 yards receiving was a team record. Chase had nine catches for 116 yards in the win over the Raiders, had five for 109 last week against the Titans. ... RB Joe Mixon and DE Trey Hendrickson joined Chase in being voted to the Pro Bowl. ... QB Joe Burrow shattered single-season franchise records for passer rating (108.3), yards (4,611), TDs passing and 300-yard games (six). Burrow was 28 of 37 for 348 yards with no touchdowns and one pick last week. ... The Bengals were the first team in NFL history with a 4,000-yard passer, 1,000-yard rusher and two 1,000-yard receivers all under 26 years old. ... Chiefs offensive coordinator Eric Bieniemy played for the Bengals from 1995-98 ... Kansas City has won six straight playoff games at Arrowhead Stadium, the longest streak in franchise history. ... The Chiefs were the fifth team in NFL history with at least 550 yards total offense and 30 first downs in last Sunday's 42-36 overtime win over Buffalo. The Bills had been the league's No. 1 scoring defense. ... Burrow and Chase, along with Bengals DT Tyler Shelvin, were teammates of Chiefs RB Clyde Edwards-Helaire at LSU. ... Chiefs coach Andy Reid needs one playoff win to match Tom Landry (20) for second in NFL history. Bill Belichick leads with 31. ... Mahomes needs 120 yards passing to break his franchise record of 901 yards for a single postseason. He needs three TD passes to break his record of 10. ... Mahomes is coming off his 10th game of at least 370 yards passing, three TDs and no interceptions. The only players with more are Drew Brees (17) and Tom Brady (14). ... Mahomes is 8-2 as the starter in the playoffs and 7-1 at home. ... Chiefs TE Travis Kelce has 96 catches for 1,196 yards and 11 touchdowns in the playoffs. He ranks second to Rob Gronkowski (98 for 1,389 and 15 TDs) among tight ends in each category. .. Kelce needs two TD catches to pass John Stallworth (12) for third most of any player in NFL postseason history.