Miles Bridges had 26 points, Ish Smith provided a huge boost off the bench with 22 points on 10-of-12 shooting and the Charlotte Hornets held off the short-handed Los Angeles Lakers 117-114 on Friday night.

Russell Westbrook scored 35 points for the Lakers, but missed a potential winning 3-pointer with 0.7 seconds left.

LeBron James missed his second straight game because of left knee soreness, and Anthony Davis did not play due to right wrist soreness. Lakers coach Frank Vogel said he held out his star center as a precautionary measure after Davis scored 31 points in a loss at Philadelphia on Thursday night. 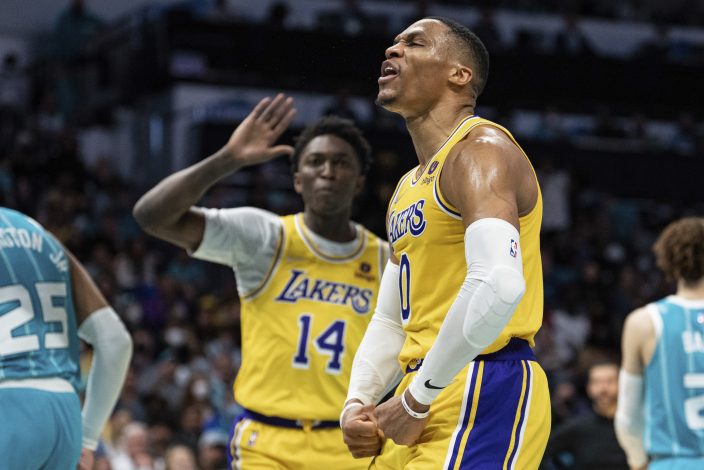 The Hornets were coming off a game Wednesday night where they scored a franchise-record 158 points against Indiana. Kelly Oubre Jr. who had 39 points on 10 3-pointers in that game, did not play due to a sprained ankle.

Ja Morant had 30 points, 10 rebounds and 10 assists for his fourth career tripble-double and Memphis pulled away in the fourth quarter to beat Utah.

Nikola Jokic scored 22 of his 29 points in the second half to go with 13 rebounds and 10 assists and Denver held off short-handed New Orleans.

Jokic had just seven points during a closely contested first half, after which the Nuggets led 50-48. The reigning NBA MVP proceeded to score 16 points in the first 11 minutes of the second half, hitting three of the four 3-point shots in that stretch.

Aaron Gordon scored 20 points for the Nuggets. They won their fourth straight and fifth in six games.

Gabe Vincent finished with 23 points, and Bam Adebayo had 20 points and 12 rebounds for the Heat. They have won 10 of 12.

The Eastern Conference-leading Heat snapped a six-game losing streak against the Clippers. Miami’s last win over Los Angeles was on Dec. 8, 2018.

Down 23 late in the third period, the Clippers closed to 117-113 on Amir Coffey’s layup with 33 seconds remaining. Butler hit four foul shots on Miami’s final two possessions to secure the win. He converted all 14 of his free-throw attempts.

Luke Kennard scored 23 points for the Clippers, including 16 in the fourth quarter.

Jusuf Nurkic had 25 points and 13 rebounds for Portland, and Norman Powell finished with 16 points.

It was Houston’s third straight loss overall. According to STATS, the Rockets became the first team in NBA history to drop 10 straight home games by nine or more points.

Christian Wood and Garrison Mathews had 21 points apiece for the Rockets. Wood also had 15 rebounds.

Sabonis had his fifth triple-double of the season and 18th overall.

Justin Holiday added 22 points to help the Pacers snap a three-game losing streak. Indiana had just given up 158 points in a loss to Charlotte in its previous game, a franchise record for points allowed.

Lu Dort scored 27 points, and Josh Giddey added 15 points and 10 rebounds for the Thunder. Shai Gilgeous-Alexander, Oklahoma City’s leading scorer this season, sprained his right ankle early in the third quarter and did not return.

DeRozan, who spent the previous three seasons with the Spurs, scored 32 points in his first game in San Antonio for the Bulls. Zach LaVine added 30 points, and Nikola Vucevic had 18.

The Magic improved to 10-40, two games behind the Pistons.

Cunningham missed his first 11 shots and finished with eight points on 3-of-17 shooting. Trey Lyles scored 18 points for Detroit.