Domantas Sabonis had 24 points, 18 rebounds and 10 assists and the Indiana Pacers outlasted the Oklahoma City Thunder 113-110 in overtime Friday night.

Sabonis had his fifth triple-double of the season and 18th overall.

Justin Holiday added 22 points to help the Pacers snap a three-game losing streak. Indiana had just given up 158 points in a loss to Charlotte in its previous game, a franchise record for points allowed and the most any team has given up this season. 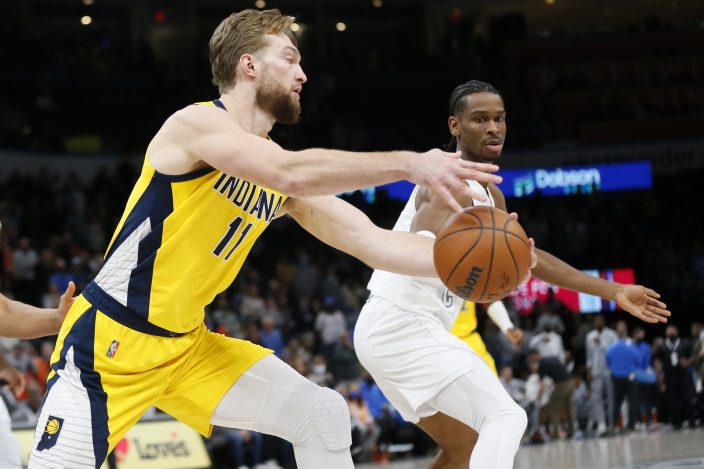 Lu Dort scored 27 points, and Josh Giddey added 15 points and 10 rebounds for the Thunder. Shai Gilgeous-Alexander, Oklahoma City's leading scorer this season, sprained his right ankle early in the third quarter and did not return.

The Thunder led 54-51 at halftime behind 11 points from Dort and 10 from Darius Bazley.

Oklahoma City opened the second half on a 12-0 run, holding the Pacers scoreless for more than four minutes. The Thunder led 80-73 heading into the fourth. Sabonis' putback with just under a minute remaining in regulation tied the score at 100, and no one scored the rest of the period.

Dort hit 3-pointers on back-to-back possessions to give Oklahoma City a 108-102 lead.

Oklahoma City's Kenrich Williams made a 3-pointer that appeared to tie the game, but the Pacers had fouled another player intentionally before the shot. Oklahoma City's Mike Muscala missed his first free throw accidentally. He missed the second intentionally, but the Thunder couldn't come up with the ball, and Indiana held on.

Pacers: Sabonis was cheered during pregame introductions when he was announced as a starter for the Pacers. He started his NBA career with the Thunder in 2016 and he played with the team for one season before getting traded. ... Guard Malcolm Brogdon, Indiana's No. 2 scorer with 18.5 points per contest, missed his fourth straight game with a sore right Achilles. Myles Turner was out with a left foot injury. ... Lance Stephenson scored 14 points.

Thunder: Center Derrick Favors sat out with lower back soreness. ... Muscala hit a 3-pointer in the closing seconds of the first quarter to give Oklahoma City a 30-29 lead. ... Bazley scored 14 points.

Pacers: At Dallas on Saturday.