Kevin Fiala and Mats Zuccarella — a former Ranger — each had a goal and an assist to extend their point streaks to 10 games, and Cam Talbot — a backup to Lundqvist for two seasons — stopped 25 shots for the Wild. Minnesota won for the seventh time in eight games (7-0-1).

Chris Kreider got his NHL-leading 31st goal and Barclay Goodrow also scored for New York, which led 2-0 after one period. Igor Shesterkin had 31 saves. The Rangers have lost two straight after winning nine of 12.

On the go-ahead goal, Gaudreau’s shot eluded Shesterkin at the 1:49 mark of the third for his third goal of the season.

The Rangers had a possible tying goal with 1.9 seconds left waved off because of goaltender interference.

The Rangers, who entered the contest with a five-game winning home streak, initially rose to the occasion following the stirring pregame ceremony for Lundqvist, their franchise goalie who had his No. 30 raised to the Garden rafters before a raucous sellout crowd of 18,006. 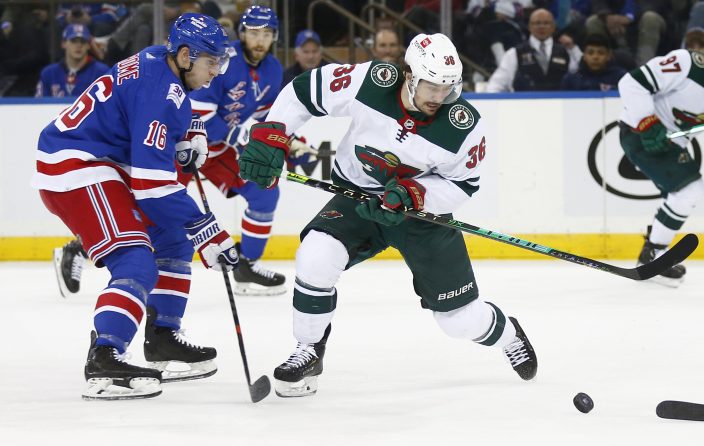 Goodrow opened the scoring for the Rangers at 8:47 of the first period with his 10th goal of the season. Jacob Trouba and Ryan Strome assisted.

Kreider made it 2-0 with 2:52 remaining in the opening period after Talbot fumbled the puck in the crease and Kreider nudged it past him. Trouba and Mika Zibanejad assisted. Zibanejad has points in 10 of his last 11 contests.

The Rangers outshot the Wild 12-5 in the first. 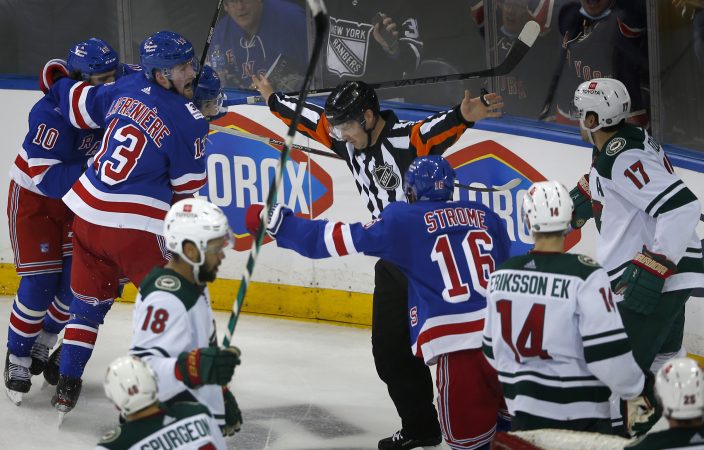 Referee Jon McIsaac (2) signals no goal after the New York Rangers thought they had tied the score with two seconds left during the third period of an NHL hockey game against the Minnesota Wild, Friday, Jan. 28, 2022, in New York. (AP PhotoJohn Munson)

The Wild then dominated the second, outshooting the Rangers 19-7 and scoring twice to tie the game.

Fiala narrowed the deficit at 12:18 of the middle period, scoring his 12th goal of the season before Zuccarello knotted the contest 89 seconds later with a power-play goal.

The tying goal was the 13th of the season for Zuccarello, a fan favorite during his nine seasons in New York. Assists went to Kirill Kaprisov and Matt Boldy. 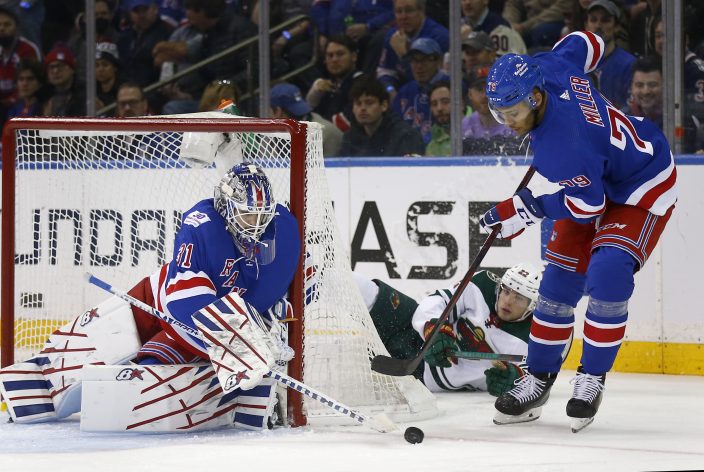 The 34-year-old Zuccarello has five goals and 13 assists during his points streak while Fiala has eight goals and five assists.

The Rangers, who were coming off a 5-3 loss at Columbus on Thursday, still have points in 15 of 19 home games this season. They will host Seattle and Florida before the All-Star break. 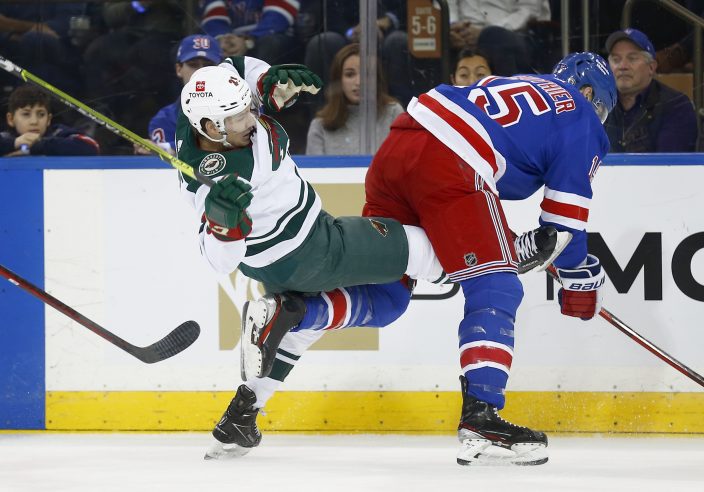 Zuccarello returned for the second time since his trade from the Rangers to Dallas in February 2019. Zuccarello was serenaded with choruses of “Zuuucc” every time he was shown on the giant screen above the ice. A close friend of Lundqvist, Zuccarello received loud applause as he took part in the pregame face-off with Zibanejad as Lundqvist, his wife and two daughters were at center ice for the drop.

NOTES: The teams meet again March 8 in Minnesota. ... The Rangers were without D Adam Fox for the first time this season. Fox, who leads the Rangers with 40 assists, was placed on injured reserve with an upper body injury after he was hurt Thursday night against Columbus. ... The Rangers scratched D Nils Lundkvist, F Filip Cytil and F Tim Gettinger. … The Wild scratched F Nico Sturm and F Nick Bjugstad.