Dejounte Murray had 29 points and 12 assists and the Spurs beat the Chicago Bulls 131-122 in DeMar DeRozan's return to San Antonio on Friday night.

DeRozan, who spent the previous three seasons with the Spurs, scored 32 points in his first game in San Antonio for the Bulls. Zach LaVine added 30 points and Nikola Vucevic had 18. 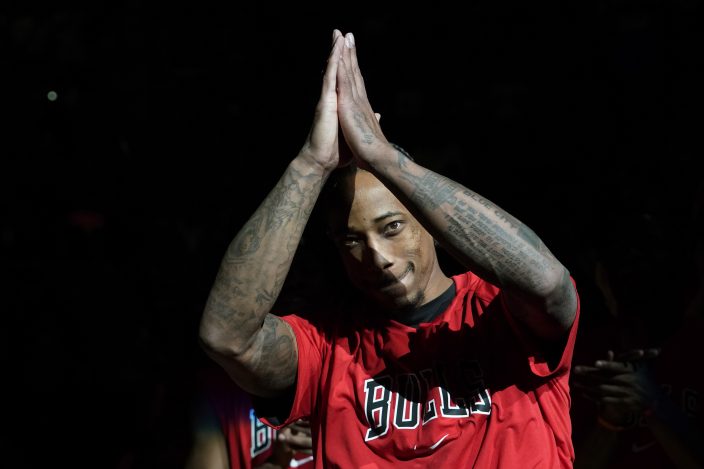 DeRozan was showered with appreciation by the fans as well as his former teammates and coaches. His only 3-pointer pared San Antonio’s lead to 124-120, but Chicago committed a turnover on its next possession to help the Spurs stay in front.

San Antonio built a 13-point lead to open the fourth quarter, its largest advantage at the time. Chicago went on a 9-2 run after DeRozan re-entered the game.

DeRozan was nearly stripped from behind by Murray as the Spurs double-teamed him to prevent a shot at the end of the first half. DeRozan maintained his dribble and composure, firing a pass to Javonte Green alone under the basket for a layup at the buzzer. 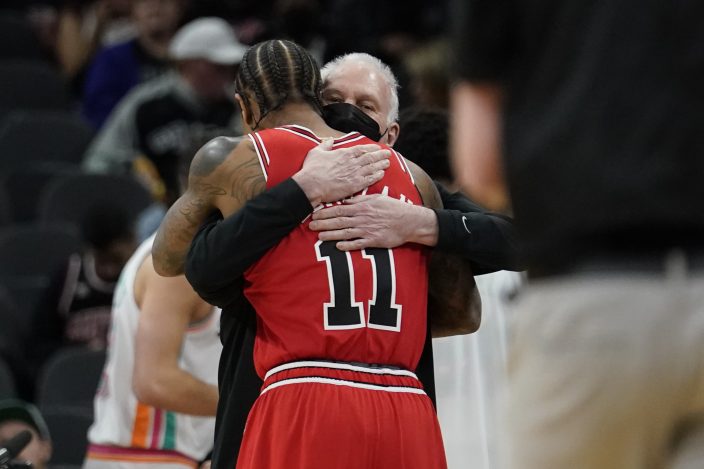 DeRozan finished with eight assists and six rebounds while committing just one turnover.

Following DeRozan’s monstrous slam over Drew Eubanks, Murray and Lonnie Walker IV hit consecutive 3-pointers to give the Spurs an 89-85 lead with 3 minutes remaining in the third quarter.

The Spurs, who lead the league in assists at 27.8 per game, had 35 against the Bulls. Seven players scored in double figures for San Antonio. 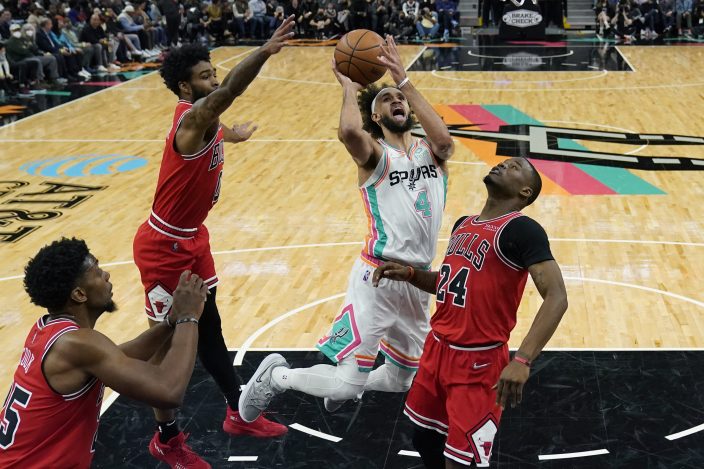 Chicago's Coby White went 6 for 6 from the field in the first half, including 3 for 3 on 3-pointers, to score 15 points. He finished with 18.

Bulls: Chicago point guard Lonzo Ball had arthroscopic surgery on his left knee Friday. Coach Billy Donovan said the timetable for Ball's return remains six to eight weeks. ... The Bulls remain without Alex Caruso (fractured left wrist), Derrick Jones Jr. (hyperextended right knee) and Patrick Williams (torn ligament in left wrist). ... San Antonio honored DeRozan with a tribute video showing his highlights on the court and work in the community. Fans gave DeRozan a long ovation and showered him with “MVP” chants after the video. DeRozan made a beeline for San Antonio coach Gregg Popovich prior to tip-off and the two shared a long embrace and some words before DeRozan took the court. ... The Bulls are 13-12 on the road. 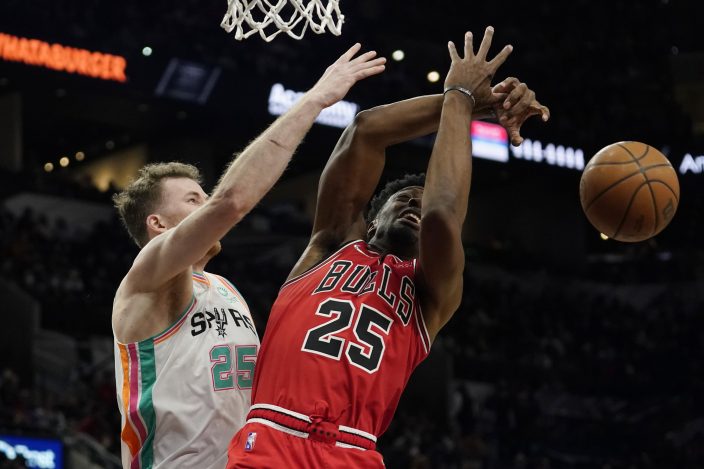 Spurs: Murray has at least 10 assists in six straight games, the second-best such streak in franchise history and the longest in the NBA this season. ... San Antonio assistant Mitch Johnson returned after missing five games while in the league’s health and safety protocols. ... F Keita Bates-Diop remains out in health and safety protocols. ... The Spurs improved to 10-16 at home. 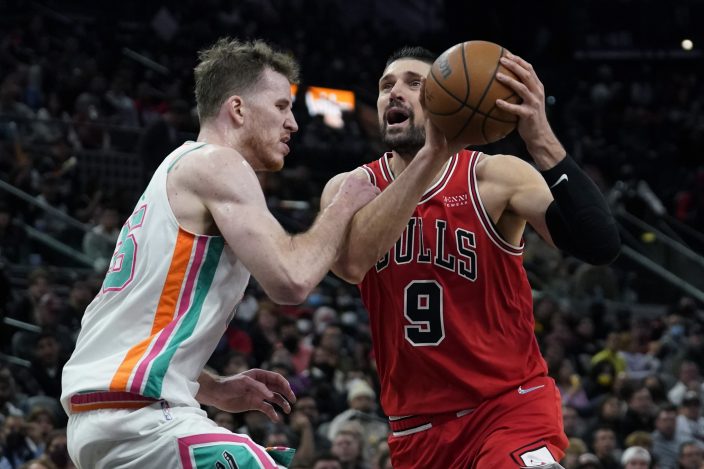 Chicago Bulls center Nikola Vucevic (9) is defended by San Antonio Spurs center Jakob Poeltl (25) as he drives to the basket during the second half of an NBA basketball game, Friday, Jan. 28, 2022, in San Antonio. (AP PhotoEric Gay)

Spurs: At Phoenix on Sunday. 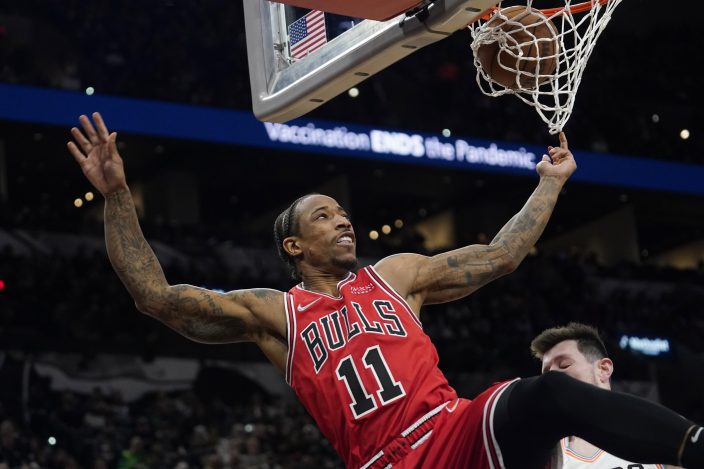 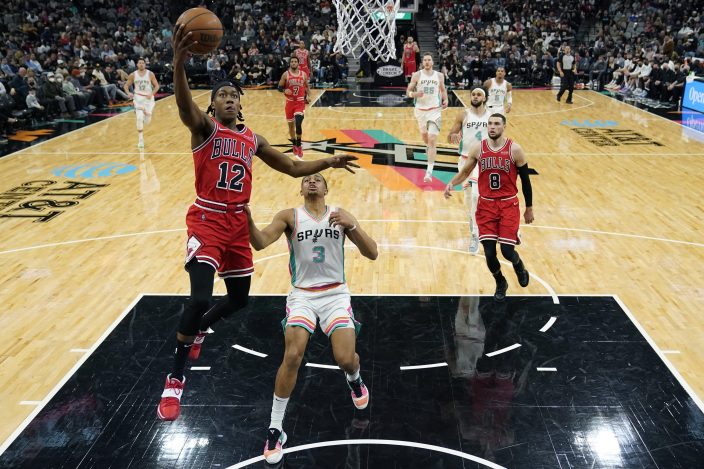