The Kansas City Chiefs were so tantalizingly close to the end zone and a third consecutive trip to the Super Bowl that they clean forgot the lessons imparted just two months ago by their division rivals.

Both the Denver Broncos and Los Angeles Chargers got greedy against the Chiefs, going for touchdowns instead of field goals just before halftime. Not taking the points backfired and led to losses to K.C. in both cases.

The Chiefs could have sent Harrison Butker out for a chip shot field goal and a 24-10 halftime cushion over Cincinnati in the AFC championship Sunday, but Kansas City went for the kill shot instead.

Patrick Mahomes convinced coach Andy Reid that he'd get his team into the end zone from the Bengals' 1 with 5 seconds and no timeouts left in the second quarter.

Kansas City's first three drives had ended with touchdown throws from Mahomes, giving him 11 in these playoffs, tying an NFL record.

One more and he’d have that record to himself and give the Chiefs a 28-10 halftime lead with the second-half kickoff coming their way. 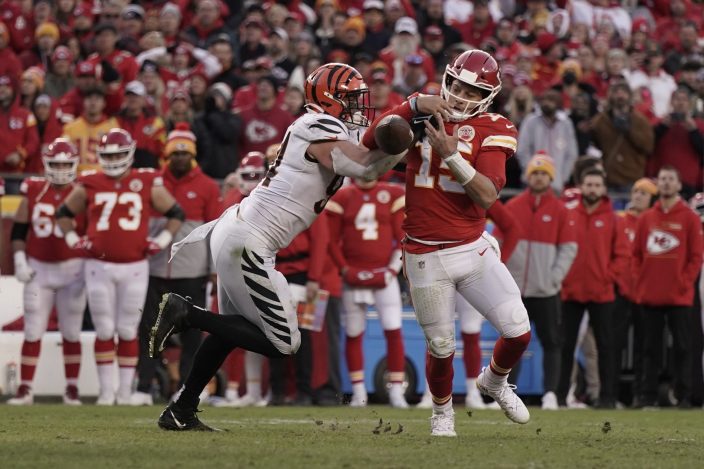 Mahomes took the snap and threw to Tyreek Hill in the left flat, but Eli Apple tackled him for no gain as Arrowhead Stadium grew silent and Mahomes frantically called for a timeout he didn’t even have.

While going for it seemed like a decent bet in the moment, what Mahomes and Reid miscalculated was the psychological cost of coming up empty on the gamble — and the big boost it would give their opponent.

All the Chiefs had to do was think back to their 22-9 win over Denver on Dec. 5 or their 34-28 win over the Chargers 11 days later. Both teams were so spooked by Mahomes that they figured they had no margin for error and were hell-bent on going for touchdowns instead of field goals.

And that played right into the quarterback's hands when they frittered away golden scoring opportunities.

“When you play a team like this, you have to get 7s," Denver QB Teddy Bridgewater insisted in the leadup to the Broncos' game at Kansas City. “Three isn’t enough.”

That was exactly the thinking employed by his then-coach Vic Fangio when Denver lost at Arrowhead Stadium despite holding Mahomes to 184 yards passing with no touchdowns and an interception.

During an epic drive in the second quarter, the Broncos did exactly what they had set out to do, chewing up yards and clock, dinking and dunking their way downfield while keeping Mahomes and his high-octane offensive teammates cooling their cleats on the sideline.

Trailing 10-3, the Broncos took over at their own 3 with 12:16 left in the second quarter. Eleven runs and eight passes later, they found themselves facing fourth-and-2 from the Kansas City 8.

Fangio said he only had a fleeting thought of settling for the field goal that would have cut Denver’s deficit to 10-6 with less than a minute left until halftime.

When the Chiefs stuffed Javonte Williams for a 1-yard loss, however, the rejuvenated Chiefs defenders whooped and hollered their way off the field.

They did the same thing two weeks later in an overtime win at SoFi Stadium in Los Angeles when the Chargers failed to punch the ball into the end zone on the game’s opening drive and again on the final play of the first half.

After Justin Herbert’s incomplete pass to Keenan Allen on fourth-and-goal from the 1, and the Chargers trudged off the field even though they led 14-10 at the break, and it was the Chiefs who excitedly rushed through their tunnel.

Chargers coach Brandon Staley made the same psychological blunder as Fangio by shying away from a precious three points in favor of gambling for seven because when he looked across the field he saw Mahomes staring back.

Mahomes had gotten into their heads and the Broncos and Chargers played right into his hands.

On Sunday, it was Mahomes who got into his own head.

The CBS broadcast crew noted that the Chiefs were about to send out the field goal unit when, according to sideline reporter Tracy Wolfson, Mahomes told Reid to give him one more shot at the end zone.

Instead, the ball went to Hill in the left flat and Apple saved the touchdown.

Mahomes said afterward the play was actually designed to go to a receiver over the middle and "I was supposed to throw the ball away” if the receiver wasn't open. I got a little greedy there and tried to get it to Tyreek for a touchdown.”

“I probably gave him the wrong play, first of all," Reid said. "To start with, I could have given him something better than that where the play was open in the end zone, and then we wouldn’t have had to go through that. I’ll take responsibility for that one.”

The Bengals were boosted by that sole defensive stop before halftime that left them down 11 points — the same deficit they'd faced against the Chiefs in Week 17 when they rallied for a 34-31 win.

“I think that was really the turning point in the game,” Joe Burrow said of Apple's crucial stop.

Mahomes and the Chiefs looked like they couldn't let go of their goal line gaffe the rest of the game as they managed a single field goal to go with four punts and two interceptions after intermission.

Bengals coach Zac Taylor said the stop just before halftime gave the Bengals all the confidence they needed in their 27-24 overtime win that sent Cincinnati to the Super Bowl for the first time in 33 years.

“We always talk about good and bad, learning from our previous experiences," Taylor said. “That happened against Jacksonville earlier this season. We were down by two scores and they went for it. Our defense stopped them going into halftime at the goal line and prevented a three-score lead. '

"We have that stuff in our memory bank.”

The Bengals came back to beat the Jaguars 24-21 back in September.

“So, when our defense makes that play,” Taylor said, "and we were down 11, just like when it was four or five weeks ago, we knew we were going to be able to win.”

And the Chiefs? They'll spend all offseason, if not longer, kicking themselves for not kicking it.