Inflation fed by high oil and gas prices hit record levels in Europe for the third month in a row, extending pain for consumers and sharpening questions about future moves by the European Central Bank.

The 19 countries that use the euro currency saw consumer prices increase by an annual 5.1% in January, the European Union statistics agency Eurostat reported Wednesday. The figure broke records of 5% in December and 4.9% in November and was the highest since recordkeeping started in 1997.

Once again, soaring energy prices played a major role, rising a painful 28.6%. Oil prices have spiked as the global economy recovers from the worst of COVID-19 restrictions, while natural gas prices have surged in Europe because of depleted winter reserves, lower supplies from Russia and fears of a renewed military move by Moscow against Ukraine. 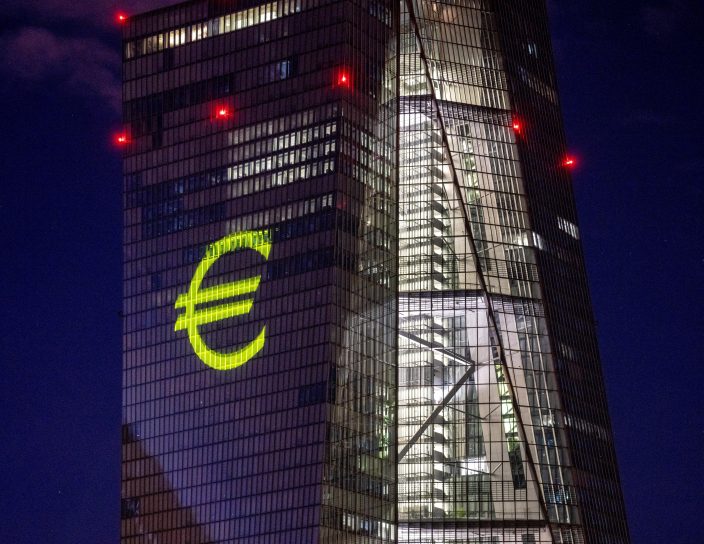 FILE - A light installation is projected onto the building of the European Central Bank during a rehearsal in Frankfurt, Germany, on Dec. 30, 2021. Inflation fed by high oil and gas prices hit record levels in Europe for the third month in a row, extending pain for consumers and sharpening questions about future moves by the European Central Bank. The 19 countries that use the euro currency saw consumer prices increase by an annual 5.1% in January, the European Union statistics agency Eurostat reported Wednesday, Feb. 2, 2022. (AP PhotoMichael Probst, File)

Higher energy bills for consumers have quickly become a political issue in Europe as governments roll out subsidies and tax breaks to soften the blow to household budgets. Higher inflation makes it more expensive for people to buy everything from food to fuel and has been one factor holding back Europe’s recovery.

Growth in the last three months of 2021 slowed to 0.3% as the latest wave of coronavirus infections driven by the omicron variant led to new restrictions and deterred consumers from in-person activities such as eating out.

High inflation has increased the focus on Thursday’s policy meeting of the European Central Bank. Bank President Christine Lagarde has said much of the inflation is tied to temporary factors that should eventually fade.

As a result, she has said it’s “very unlikely” that the bank will raise interest rates this year, the typical antidote that central banks use against excessive inflation.

The bank might drop the “very” before “unlikely” on Thursday but would otherwise stick to its road map based on plans to phase out the last of its pandemic stimulus by the end of 2022, said Andrew Kenningham, chief Europe economist at Capital Economics.

“That would prepare the ground for the bank to raise rates, with the first hike in early 2023, though an increase at the end of this year is certainly possible,” Kenningham said.

The European Central Bank’s stance contrasts sharply with that of the U.S. Federal Reserve, which has signaled it could begin a series of rate increases as early as March. U.S. annual consumer inflation hit 7% in December, a 40-year high.

Analysts say markets will be watching to see if there is any shift in the European Central Bank’s outlook. It thinks inflation will decline sharply this year and fall to 1.8% in 2023 and 2024.

It points to temporary inflation factors including bottlenecks in deliveries of parts and raw materials that limit supplies of goods and drive up prices as well as comparisons to extremely low energy prices during the worst of the pandemic slowdowns. Those comparisons will drop out of inflation statistics in time.

Inflation hits record of 5% in 19 countries using the euro