Keir Starmer, the leader of the opposition Labour Party, was harassed outside Parliament on Monday by protesters against coronavirus restrictions, who could be heard yelling accusations of “protecting pedophiles” — echoing a slur made by Johnson last week.

Johnson accused Starmer in the House of Commons of failing to prosecute Jimmy Savile for sexual abuse when Starmer was the U.K.’s director of public prosecutions between 2008 and 2013. Savile was a long-time presenter of youth television shows who was exposed after his death in 2011 as a sexual predator who had abused hundreds of children. 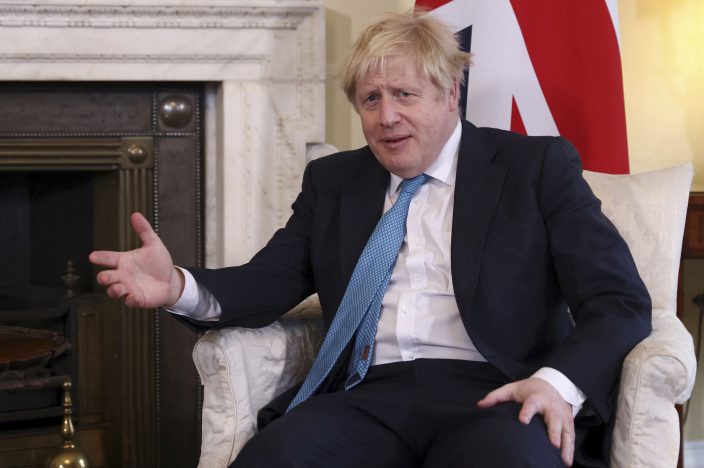 A 2013 report found that Starmer hadn’t been involved in decisions about whether Savile should be prosecuted.

Labour lawmaker Rosena Allin-Khan said Johnson was prepared to “smear any person or group who stands in his way and benefit only himself.”

“This is straight out of the Trumpian playbook,” she said.

Johnson called the harassment of Starmer “absolutely disgraceful,” but didn't accept any responsibility.

Technology Minister Chris Philp argued that Johnson wasn't responsible for the behavior of the protesters, who, he said, “did mention Jimmy Savile. They also mentioned Julian Assange repeatedly, they mentioned COVID, they also mentioned the opposition more generally.”

“I don’t think you can point to what the prime minister said as the cause of that,” Philp said.

Monday’s incident, which saw Starmer driven away in a police car and two arrests, heightened concerns that the atmosphere of British politics has become more toxic.

Two members of Parliament have been killed in recent years. Conservative lawmaker David Amess was stabbed to death as he met with constituents in October, in what police have called an act of terrorism. In 2016, Labour legislator Jo Cox was shot and stabbed by a man with far-right views.

Cox’s sister Kim Leadbeater — now a Labour lawmaker herself — said that while the protesters were responsible for their actions, “we also have to be clear that things don’t happen in a vacuum.”

“And while ever we have a culture of toxicity and aggression and lies in politics, we have to think about the consequences of that,” she told the BBC.

The Starmer altercation added to discontent among Conservatives with Johnson, whose grip on power has been shaken by public anger over revelations that his staff held office parties in 2020 and 2021 while millions in Britain were barred from meeting with friends and family because of his government’s COVID-19 restrictions.

Conservative lawmakers are mulling whether to seek a no-confidence vote in the leader who won them a big parliamentary majority just over two years ago.

Under party rules, a no-confidence vote is triggered if 15% of party lawmakers — currently 54 people — write letters calling for one. If Johnson lost such a vote, he would be replaced as party leader and prime minister.