Luke Donald suddenly is on the fast track for Europe's next Ryder Cup captain, bringing the experience of playing on four winning teams and twice serving as an assistant. And there's one other factor he couldn't ignore.

“I guess we should probably thank Saudi Arabia for that, maybe,” Donald said with a laugh.

Lee Westwood was thought to be in line for the 2023 matches in Italy until taking himself out of the mix. Ian Poulter has been looked upon as an ideal captain for rowdy Bethpage Black in 2025. For now, that would seem to leave Donald and Henrik Stenson. 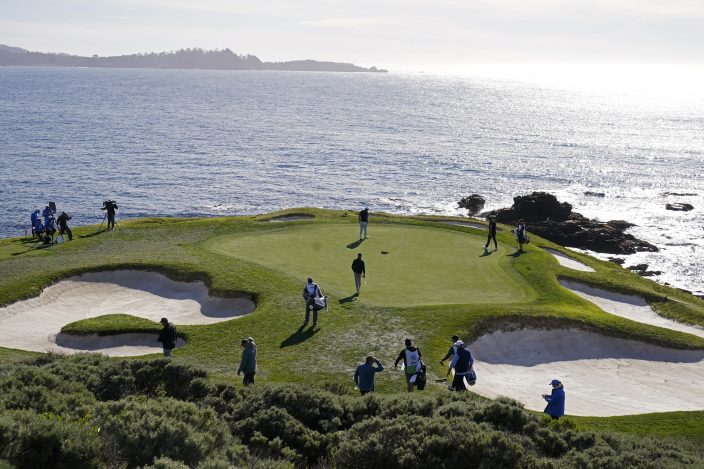 Tom Hoge, top center, walks to his ball on the seventh green of the Pebble Beach Golf Links during the first round of the AT&T Pebble Beach Pro-Am golf tournament in Pebble Beach, Calif., Thursday, Feb. 3, 2022. (AP PhotoEric Risberg)

And a lot of questions around who might take the Saudi money to join a competing tour.

“It looked like everyone thought Westwood was going to be the next captain — he's certainly next in line, I would have thought — but he obviously feels he is playing well enough to make a team or he's looking at something else," Donald said. "He said he signed an NDA, didn't he? So I guess he's talking to the Saudis, and that's obviously a no-go for the European tour or PGA Tour. 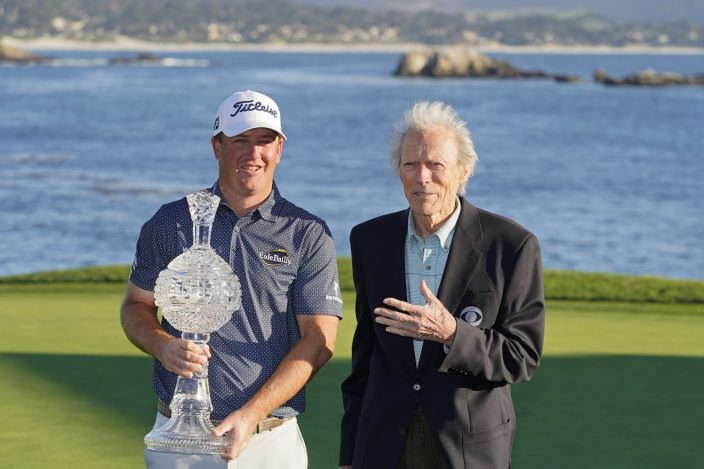 Padraig Harrington, the captain at Whistling Straits and part of the five-member committee that will chose the next captain, already has said Donald would have his recommendation.

To show how much a Saudi-backed Super Golf League has thrown a wrench in the tour, Europe typically would have announced a captain by now. Six of the last seven European captains had been announced before the end of January. 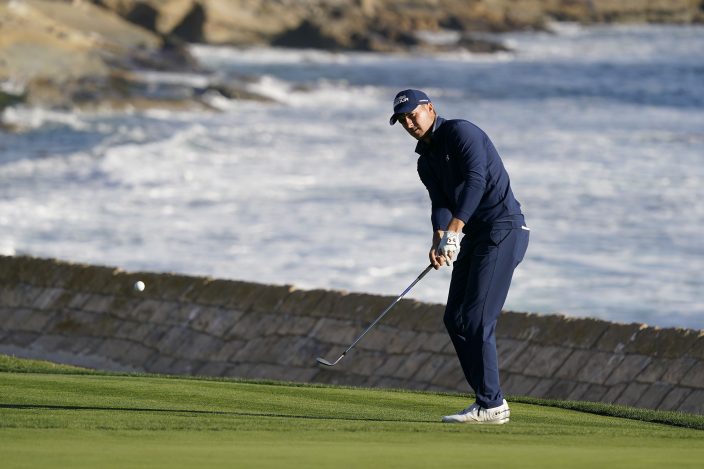 Donald said he has exchanged messages with Guy Kinnings, the Ryder Cup director for Europe, but he said the European tour has otherwise “kept things close to the vest.”

“I guess I feel like the decision would have been made a month or two ago if it wasn't for some other circumstances,” Donald said. “Waiting around is a little awkward. Knowing me, if I was picked, I really want to get going. I want to start the process. September of next year will come pretty quickly. The more time I would have to prepare and think of things that will help the team would be better for me.”

The Americans also are slightly behind, though that presumably has more to do with outgoing captain Steve Stricker recovering from a virus that hospitalized him. Zach Johnson is believed to be a leading candidate.

Whenever the captains are determined, the next part of the equation would be who is eligible to play. Players who joined a Super Golf League would not be members of their tours, and it would seem unlikely they could play.

“Let's be honest. If this thing happens, both teams will be missing players,” Donald said.

After one year of the Augusta National Women's Amateur, some of the participants already were calling it the biggest women's amateur event on the calendar.

The most recent field list would seem to support that.

Augusta National has sent out 71 invitations for the 54-hole event leading up to the Masters, and the field features 39 of the top 40 players in the field.

The only one missing is sixth-ranked Tsubasa Kajitani of Japan, who happens to be the defending champion and the first Japanese player to win at Augusta National (eight days before Hideki Matsuyama won the Masters).

The club did not say why Kajitani is not playing this year. She made the cut in one of the three LPGA majors she played last year (Evian). Her last event that counts toward the women's world amateur ranking was 55th place in a Japan LPGA event in early October.

United Airlines and the PGA Tour have teamed up on a program in which the airline will give 51 golf teams at historically black colleges and universities $510,000 in grants to pay for travel to golf tournaments and for recruiting.

Each of the HBCUs -- 33 men’s programs and 18 women’s programs -- will receive $10,000 in travel credits on United. HBCU golf coaches had said a lack of access to air travel was among the biggest obstacles in developing a successful golf program.

“Removing barriers for HBCU students to have the same opportunities given to other collegiate athletes will open doors for countless young Black golfers to achieve their dreams and for HBCU golf programs to develop to their full potential,” said Brett Hart, president of United.

Charles Penny II, the golf coach at Winston-Salem State in North Carolina, said his team could only play one tournament in the fall because of the travel budget. He expects to add up to four events this fall.

For those who love the view of Pebble Beach either in person or on television, consider that next year it will be twice as good.

Along with the AT&T Pebble Beach Pro-Am in early February for the PGA Tour, the U.S. Women's Open will be coming to Pebble Beach for the first time in 2023.

While the dates have not been announced, a Pebble Beach Co. executive said the Women's Open will be the first full week in July.

The U.S. Women's Open since 2018 has been held around the first week in June, the same week as the Memorial Tournament.

Two weeks after the Epson Tour announced its new umbrella sponsor, the developmental tour for the LPGA released a 21-tournament schedule with $4.41 million in total prize money.

The tour starts March 4-6 in Florida and wraps up seven months later with the Tour Championship.

“Five years ago, fewer than one in five tournaments were playing for a $200,000 purse. Now this mark is the new minimum threshold for every event, opening new doors for all individuals chasing their dream of one day playing on the LPGA Tour,” said Mike Nichols, chief business officer of LPGA qualifying tours.

The Cognizant Founders Cup has a multiyear deal to be played at Upper Montclair Country Club in New Jersey, which previously held LPGA events seven times, most recently in 2009. It also held a former PGA Tour event in the 1960s. ... With the New Zealand Open canceled due to pandemic-related travel restrictions, the R&A is offering three spots to the British Open to leading players who finish in the top 10 at the Vic Open this week in Australia. ... The USGA is taking its U.S. Women's Amateur Four-Ball to the Home Course in DuPont, Washington, next year. ... Velocity Global is expanding its golf footprint. It has become an official partner with the European tour, meaning it now has partnerships with the PGA Tour, European tour, LPGA and Ladies European Tour. It also has individual sponsorship deals with players from the PGA Tour (Billy Horschel), LPGA Tour (Albane Valenzuela and Lexi Thompson) and APGA Tour (Kevin Hall). ... British photographer David Cannon has been chosen to receive the PGA of America’s Lifetime Achievement Award in photojournalism. He will be honored at the PGA Championship in May at Southern Hills.

“We've been here since Saturday and as excited as I am for the next couple events, I mean I could stay here for months and just play this golf course.” — Jordan Spieth after his runner-up finish at Pebble Beach.