There's another game in town, one that can make a much longer-lasting impact.

When basketball's best gather in Cleveland to dunk, fire 3-pointers and hobnob with corporate partners as the league celebrates its 75th anniversary this weekend, another group of players will get a chance to shine amid the glittering stars. 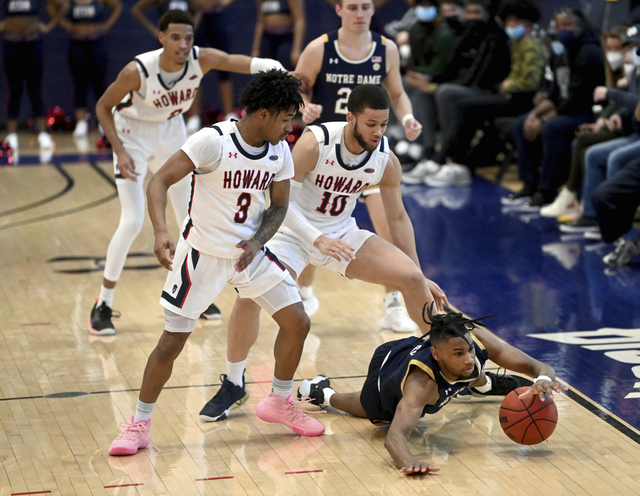 FILE - Notre Dame guard Blake Wesley, bottom right, comes up with the ball ahead of Howard guards Elijah Hawkins (3) and Deven Richmond (10) late in the second half of an NCAA college basketball game Monday, Jan. 17, 2022, in Washington. Morgan State will play Howard on Saturday in the inaugural NBA HBCU Classic, a matchup that will provide major exposure — and funding — for historically Black colleges and universities while expanding the league's longtime commitment to HBCUs, a nationwide network of 107 schools. (Katherine FreyThe Washington Post via AP, File)The Washington Post via AP)

Morgan State will play Howard on Saturday in the inaugural NBA HBCU Classic, a matchup that will provide major exposure — and funding — for historically Black colleges and universities while expanding the league's longtime commitment to HBCUs, a nationwide network of 107 schools.

“I’m excited about it,” said Phoenix Suns guard Chris Paul, a 12-time All-Star and former president of the NBA Players Association. ”It’s a great stage for them. It’s the education of it. A lot of people don’t understand the importance of HBCUs and why they were formed. To continue to elevate them and give them a stage and a platform is very important.”

Paul played a major role in broadening the league's ties with HBCUs, a partnership that goes back 35 years to former Commissioner David Stern serving as a founding board member for the Thurgood Marshall College Fund. 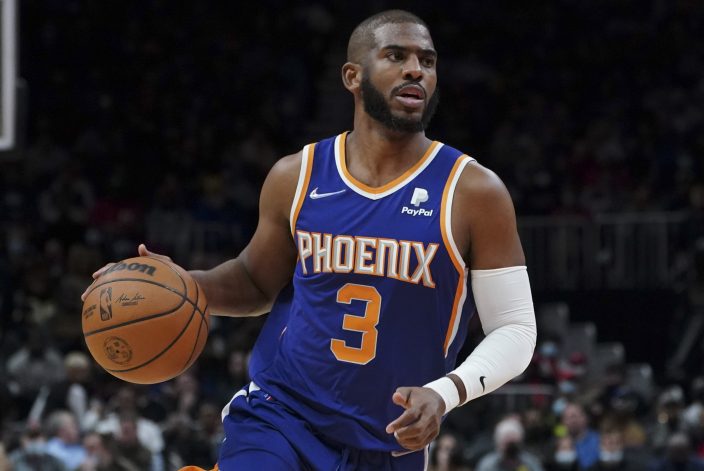 FILE - Phoenix Suns guard Chris Paul (3) is shown during the first half of an NBA basketball game against the Atlanta Hawks on Thursday, Feb. 3, 2022, in Atlanta. Morgan State will play Howard on Saturday in the inaugural NBA HBCU Classic, a matchup that will provide major exposure — and funding — for historically Black colleges and universities while expanding the league's longtime commitment to HBCUs, a nationwide network of 107 schools. “I’m excited about it,” said Phoenix Suns guard Chris Paul, a 12-time All-Star and former president of the NBA Players Association. (AP PhotoJohn Bazemore, File)

The HBCU experience was celebrated at last year's All-Star Weekend in Atlanta, where marching bands trumpeted players onto the floor, step teams performed and the league used NBA referees who attended HBCUs.

In all, the league and NBPA donated $3 million to the HBCU community for academic scholarships, advancement initiatives and other programs last year. Those funds are expected to grow in 2022 with TNT and ESPN broadcasting Saturday's game from Cleveland State's campus.

And while the financial windfall is essential, the All-Star stage also provides an opportunity for the institutions to promote their histories while serving as a recruiting tool — for academics and athletics.

Attracting high-profile players has been a decades-old challenge at HBCUs. They're rarely on national TV, typically get one or two teams in the NCAA Tournament and rarely get past the first round.

It's a tough sell for a coach, who might be trying to convince blue-chip athletes to come play in front of less than 1,000 fans while a Power 5 school can promise sold-out arenas, trips abroad and state-of-the-art facilities.

That's why the NBA's All-Star invitation is so vital.

“They’re like the big brother, and we're the little brother,” said Morgan State coach Kevin Broadus. “They’re bringing us in and showing the kids you can make it from anywhere in the world.”

HBCU players have made it to the world's best league in the past with Charles Oakley, Avery Johnson, Rick Mahorn and Ben Wallace among the most notable. Robert Covington (Tennessee State), traded last week from Portland to the Clippers, is the only HBCU alum currently in the league.

But Broadus, who played at Grambling and Bowie State, believes the All-Star showcase can prime the HBCU-to-NBA pipeline.

“There are a lot of guys who have played at HBCUs before this that have made it to the NBA and the league is helping open that eye back up and giving guys hope that they have a chance to play at that level,” Broadus said. "They’re saying, ‘We’ll bring you on our stage and show you what it’s all about,’ and hopefully some of these guys will get looks.

"Like I always tell these guys, you can play anywhere in the country and someone’s going to find you. It’s their job to find good players.”

Along with the potential of attracting the eyes of NBA scouts, Morgan State and Howard's inclusion in All-Star festivities will get their programs seen by high school athletes who may not have HBCUs on their radars.

Broadus knows the drill. As Binghamton's coach and an assistant at Georgetown and Maryland, he understands what it's like recruiting for talent against the game's goliaths.

But just as Howard landed heralded recruit Makur Maker (he spent one year at the school and is now playing professionally in Australia) a couple years ago, one elite player can raise a school's profile.

“You only need one of those high-profile players to like you,” Broadus said. “You don’t need all 100 -- just one. We’re just looking for the next really good player to help our program go to the next level.”

It won't be just hoops for the Morgan State and Howard student-athletes during All-Star Weekend in Cleveland.

In addition to meeting past and present players, there will be workshops with league executives and others in the industry to network and discuss mentorship opportunities.

“We hire lawyers. We hire technology leaders. We hire creatives. We hire communication professionals,” said Greg Taylor, executive director of the NBA Foundation. “So the off-the-court education and career development programming is meant to expose the student-athletes to what it takes to obtain one of those employment or career tracks.”

This summer, the league is also launching the HBCU Fellowship Program, a 10-week internship for undergraduates and graduates.

While those initiatives are noble, Taylor said the investment of stars like Paul and Curry, who committed to funding Howard's golf programs for six years, has been instrumental in preserving the legacy of HBCUs and ensuring their futures.

“I think 20% of the college graduates annually come from HBCUs when they’re only 3% of the number of colleges and universities in the country,” Taylor said. "It’s an incredibly important pipeline, and for the players to lean in and share their celebrity and knowledge and visibility to shine a light on these institutions is what it’s all about.”