As Ukrainians waved flags in a show of defiance of a feared Russian invasion, the United States reported that Moscow had added as many as 7,000 troops to forces stationed along the tense border — a warning that contradicted Kremlin declarations that military units were being pulled back.

A Russian invasion of Ukraine did not materialize Wednesday, as originally feared. But after a handful of positive signals from Moscow that eased tensions earlier in the week, the pendulum appeared to swing in the opposite direction again.

Western allies maintained that the threat of an attack was strong, with an estimated 150,000-plus Russian troops surrounding the country on three sides. 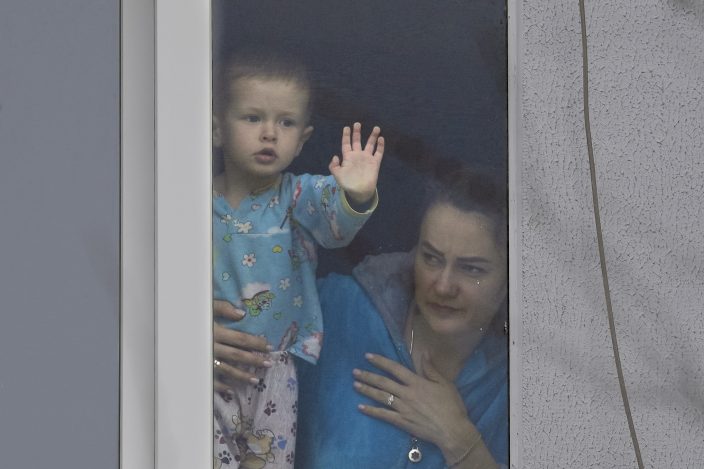 A child and woman watch from a window as people carry a large Ukrainian flag as they mark a Day of Unity in Sievierodonetsk, the Luhansk region, eastern Ukraine, Wednesday, Feb. 16, 2022. Russian President Vladimir Putin said that he welcomed a security dialogue with the West, and his military reported pulling back some of its troops near Ukraine, while U.S. President Joe Biden said the U.S. had not verified Russia's claim and that an invasion was still a distinct possibility. (AP PhotoVadim Ghirda)

At the heart of the crisis are Russia's demands that the West keep Ukraine and other former Soviet nations out of NATO, halt weapons deployments near Russian borders and roll back forces from Eastern Europe. The U.S. and its allies have roundly rejected those demands, but they offered to engage in talks with Russia on ways to bolster security in Europe.

Though Russia has said it is pulling back some troops, a senior U.S. administration official said some forces arrived only recently and that there had been a marked increase in false claims by Russians that the Kremlin might use as pretext for an invasion. The official said those claims included reports of unmarked graves of civilians allegedly killed by Ukrainian forces, assertions that the U.S. and Ukraine are developing biological or chemical weapons, and claims that the West is funneling in guerrillas to kill Ukrainians.

The official was not authorized to speak publicly about sensitive operations and spoke to The Associated Press on condition of anonymity. The official did not provide underlying evidence for the assertions. 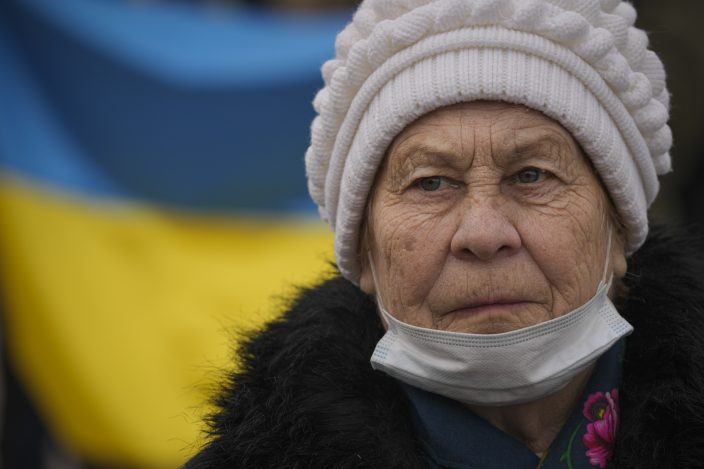 An elderly lady looks at people carrying a large Ukrainian flag as they mark a "day of unity" in Sievierodonetsk, the Luhansk region, eastern Ukraine, Wednesday, Feb. 16, 2022. Russian President Vladimir Putin said that he welcomed a security dialogue with the West, and his military reported pulling back some of its troops near Ukraine, while U.S. President Joe Biden said the U.S. had not verified Russia's claim and that an invasion was still a distinct possibility. (AP PhotoVadim Ghirda)

Asked why Russians would claim to be withdrawing when government intelligence, commercial satellite photos and social media videos showed no evidence of that, State Department spokesman Ned Price said: “This is the Russian playbook, to paint a picture publicly … while they do the opposite.”

Maxar Technologies, a commercial satellite imagery company that has been monitoring the Russian buildup, reported that new photos show heightened Russian military activity near Ukraine, including the construction of a pontoon bridge in Belarus less than 6 kilometers (4 miles) from the Ukrainian border.

NATO Secretary-General Jens Stoltenberg said the alliance also had not seen “any withdrawal of Russian forces,” as did some European governments.

“What is this? Rotations, withdrawal, returning back again," he said on a visit to the southeastern city of Mariupol. “It’s too early to rejoice.”

The Ukrainian leader, who has repeatedly sought to project calm and strength during the crisis, declared Wednesday a day of "national unity” — a day that had been floated as a possibility for the start of an invasion.

“We are united by a desire to happily live in peace,” Zelenskyy told the nation in an address. “We can defend our home only if we stay united.”

Across the country, Ukrainians of all ages waved flags in the streets and from apartment windows.

Hundreds unfolded a 200-meter (650-foot) flag at Kyiv’s Olympic Stadium, while another was draped in the center of a shopping mall in the capital.

In the government-controlled part of Ukraine's eastern region of Luhansk, where Russian-backed separatists have been fighting Ukrainian troops since 2014, residents stretched another huge flag across a street.

“This event, this number of people united around the Ukrainian flag will show that we stand for united Ukraine,” resident Olena Tkachova said.

A 2015 deal brokered by France and Germany helped end the worst of the fighting in eastern Ukraine, but implementation has stalled. The deal, known as the Minsk agreement, would offer broad self-rule to the separatist territories and thus is resented by many in Ukraine.

A Ukrainian government official said in a television interview that Zelenskyy would consider holding a referendum on the Minsk agreement “if there are no other options or instruments.” But Vice Prime Minister Iryna Vereshchuk said she was unaware that such an idea was under serious discussion.

Putin has signaled that he wants a peaceful path out of the crisis. His country has repeatedly complained that the U.S. and NATO have not responded satisfactorily in writing to its security concerns. Foreign Ministry spokeswoman Maria Zakharova said that Russia is in the final phase of preparing its formal response to the West.

“After that, a schedule of further steps will be developed,” she said on state television.

It appeared to be another indication that the Kremlin is determined to keep up the pressure for a while.

For now, Russia is flexing its muscle. Russian fighter jets flew training missions over neighboring Belarus, and paratroopers held shooting drills at firing ranges there as part of massive war games that the West feared could be used as cover for an invasion of Ukraine. Belarusian Foreign Minister Vladimir Makei reaffirmed that all Russian troops and weapons will leave the country when the maneuvers end Sunday.