The U.S. issued some of its starkest, most detailed warnings yet about how a Russian invasion of Ukraine might unfold, and its Western allies went on high alert for any attempts by the Kremlin to create a false pretext for a new war in Europe.

U.S. President Joe Biden sounded unusually dire Thursday, as he warned that Washington saw no signs of a promised Russian withdrawal — but instead saw more troops moving toward the border with Ukraine, indicating Moscow could invade within days.

“Every indication we have is they’re prepared to go into Ukraine, attack Ukraine,” Biden told reporters at the White House. He said the U.S. has “reason to believe” that Russia is “engaged in a false flag operation to have an excuse to go in,” but he did not provide details. 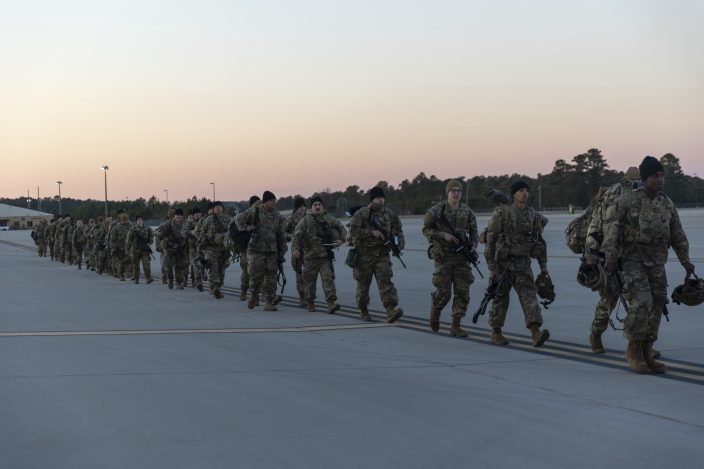 Members of the 82nd Airborne Division of the U.S. Army walk on the tarmac at Pope Field ahead of deployment to Poland from Fort Bragg, N.C. on Monday, Feb. 14, 2022. They are among soldiers the Department of Defense is sending in a demonstration of American commitment to NATO allies worried at the prospect of Russia invading Ukraine. (AP PhotoNathan Posner)

Western fears focus on an estimated 150,000 Russian troops — about 60% of Russia’s overall ground forces — posted around Ukraine’s borders. The Kremlin insists it has no plans to invade, but it has long considered Ukraine part of its sphere of influence and NATO's eastward expansion an existential threat. A key demand in this crisis is that NATO promise never to allow Ukraine to join.

Biden planned to speak by phone Friday with trans-Atlantic leaders about the Russian military buildup and continued efforts at deterrence and diplomacy.

U.S. Secretary of State Antony Blinken revealed some conclusions of U.S. intelligence, part of a strategy designed to expose and pre-empt any invasion planning. The U.S. has declined to reveal much of the evidence underlying its claims. 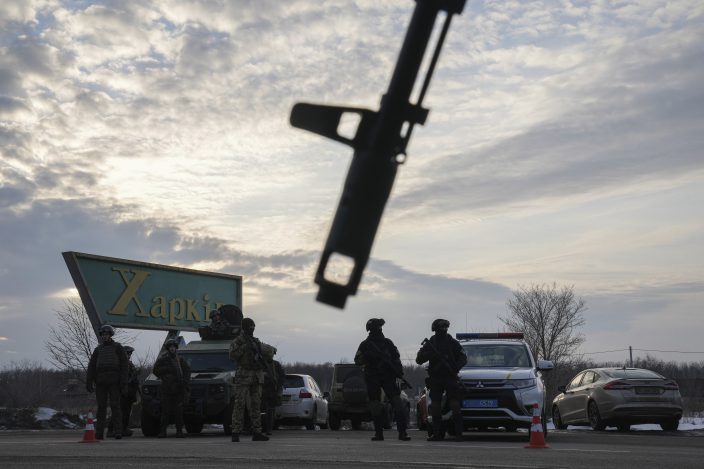 Ukrainian National guard soldiers check a car at a mobile checkpoint together with the Ukrainian Security Service agents and police officers during a joint operation in Kharkiv, Ukraine, Thursday, Feb. 17, 2022. Fears of a new war in Europe have resurged as U.S. President Joe Biden warned that Russia could invade Ukraine within days, and violence spiked in a long-running standoff in eastern Ukraine that some fear could be the spark for wider conflict. (AP PhotoEvgeniy Maloletka)

Blinken told diplomats at the U.N. Security Council that a sudden, seemingly violent event staged by Russia to justify an invasion would kick off the assault. Blinken mentioned a “so-called terrorist bombing” inside Russia, a staged drone strike, “a fake, even a real attack … using chemical weapons.”

The invasion would open with cyberattacks, along with missile strikes and bombs across Ukraine, he said. Blinken described the entry of Russian troops, advancing on Kyiv, a city of nearly 3 million, and other key targets.

By Thursday evening, U.S. and European officials were on high alert for any Russian attempts to create a pretext for invasion, according to a Western official familiar with intelligence findings. Ukrainian government officials shared intelligence with allies that suggested the Russians might try to shell the Luhansk area in the disputed Donbas region on Friday morning as part of an effort to create a false reason to take military action, according to the official who was not authorized to comment publicly. 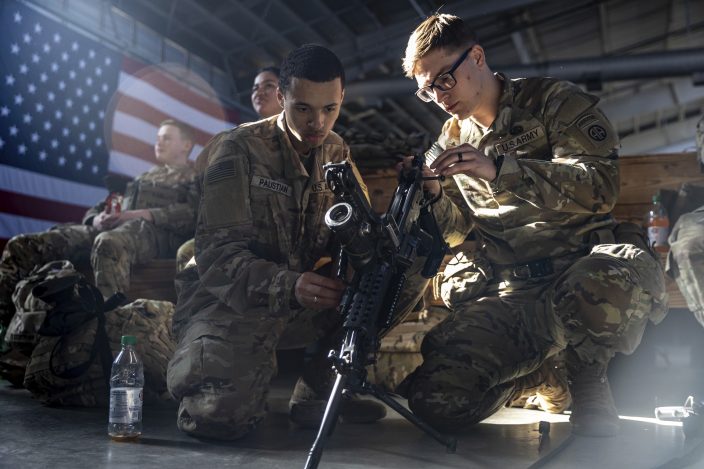 Members of the 82nd Airborne Division of the U.S. Army clean weaponry ahead of deployment to Poland from Fort Bragg, N.C. on Monday, Feb. 14, 2022. They are among soldiers the Department of Defense is sending in a demonstration of American commitment to NATO allies worried at the prospect of Russia invading Ukraine. (AP PhotoNathan Posner)

Violence spiked in a long-running standoff in that area on Thursday, fueling worries it could provide the spark for wider conflict. The region already has been the site of fighting since 2014 that has killed 14,000.

Ukraine disputed the claim, saying separatists had shelled its forces but they didn’t fire back. The Ukrainian military command said shells hit a kindergarten in Stanytsia Luhanska, wounding two teachers, and cut power to half the town. 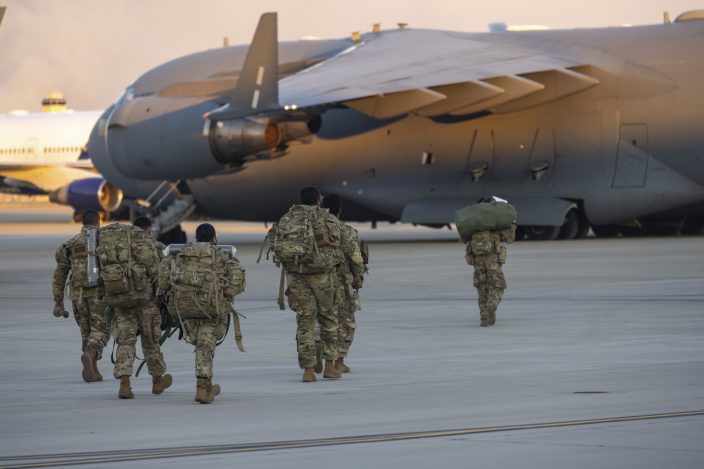 Members of the 82nd Airborne Division of the U.S. Army walk on the tarmac at Pope Field ahead of deployment to Poland from Fort Bragg, N.C. on Monday, Feb. 14, 2022. They are among soldiers the Department of Defense is sending in a demonstration of American commitment to NATO allies worried at the prospect of Russia invading Ukraine. (AP PhotoNathan Posner)

Ukrainian President Volodymyr Zelenskyy tweeted that the kindergarten shelling “by pro-Russian forces is a big provocation.”

Kremlin spokesman Dmitry Peskov countered with the same: ”We have repeatedly warned that the excessive concentration of Ukrainian armed forces in the immediate vicinity of the line of demarcation, coupled with possible provocations, could pose a terrible danger.”

Western powers scrambled to avert, or prepare for, eventual invasion.

NATO's defense ministers discussed ways to bolster defenses in Eastern Europe, while EU leaders huddled over how to punish Russia if it invades. Blinken and Vice President Kamala Harris are among political, military and diplomatic leaders heading to an annual security conference in Munich that will see urgent consultations on the crisis.

“We’ve seen some of those troops inch closer to that border. We see them fly in more combat and support aircraft,” he said. “We see them sharpen their readiness in the Black Sea. We even see them stocking up their blood supplies. You don’t do these sort of things for no reason, and you certainly don’t do them if you’re getting ready to pack up and go home.”

British Defense Secretary Ben Wallace said the West has seen "an increase of troops over the last 48 hours, up to 7,000." That squared with what a U.S. administration official said a day earlier.

Russia says the pullout, announced earlier this week, will take time. Russia also made a new diplomatic overture Thursday, handing the U.S. a response to offers to engage in talks on limiting missile deployments in Europe, restrictions on military drills and other confidence-building measures.

The response, released by the Foreign Ministry, deplored the West’s refusal to meet the main Russian security demands and reaffirmed that Moscow could take unspecified “military-technical measures” if the U.S. and its allies continue to stonewall its concerns.

At the same time, it said Russia was ready to discuss limits on missile deployments, restrictions on patrol flights by strategic bombers and other steps.