Tyree Appleby scored 20 of his 26 points in the second half, Colin Castleton added 19 and Florida rallied to beat No. 2 Auburn 63-62 Saturday to extend its home dominance in the series.

The Tigers (24-3, 12-2 Southeastern Conference) lost their second straight on the road and dropped their first game in regulation. They previously lost to UConn and Arkansas in overtime.

Appleby had everything to do with this one, which was Florida’s 14th straight win over Auburn in Gainesville. The senior made 6 of 9 shots in the second half, including 4 of 6 from 3-point range, and was perfect from the free-throw line. 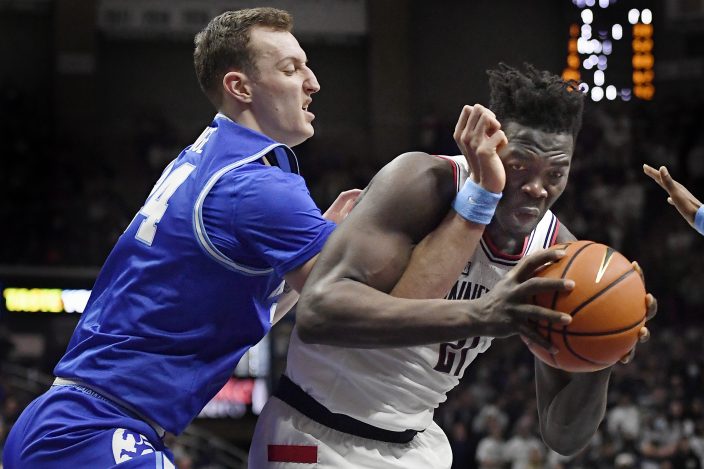 Still, the Tigers had a chance in the final seconds. Wendell Green Jr. got the ball with 7.1 seconds to play and was dribbling at the top of the key when he tried to pass to Walker Kessler down low. The Gators (17-10, 7-7) knocked it away, and the clock ran out.

Kellan Grady made seven 3s for a season-high 25 points and Oscar Tshiebwe added 21 points with 14 rebounds for the Wildcats, who had to rally twice.

Short-handed because of injuries to starting guards TyTy Washington Jr. and Sahvir Wheeler, Kentucky (22-5, 11-3 Southeastern Conference) trailed 46-34 with 3½ minutes remaining before halftime before closing with 13 straight points for their first lead. Grady’s 3-pointer capped the run that draw a thunderous roar in Rupp Arena.

The Jayhawks (22-4, 11-2) maintained their two-game lead in the Big 12 over No. 7 Baylor and No. 11 Texas Tech with five games remaining before the conference tournament.

Jeremy Sochan matched his season high with 17 points as five players scored in double figures for Baylor, which led throughout despite missing two hurting guards.

Baylor (22-5, 10-4 Big 12) played with only six players, except for a two-minute stretch by a seldom-used sophomore in the first half, while bouncing back from a 10-point loss at No. 11 Texas Tech three nights earlier.

Matthew Mayer added 16 points for the Bears, who led by as many as 21 points with five minutes left before a late spurt by TCU.

Kendall Brown had 13 points and James Akinjo 11 for the Bears. Flo Thamba had 10 points and eight rebounds.

Reserve Joey Baker provided a big lift for Duke (23-4, 13-3 ACC), which had Hall of Fame coach Mike Krzyzewski back after missing the second half of the Blue Devils’ previous game because he wasn’t feeling well. Baker scored 12 points on four first-half 3-pointers and the Blue Devils closed the half on a 12-2 burst to take a 52-41 lead against the injury-depleted Seminoles.

VILLANOVA, Pa. (AP) -- Justin Moore scored 15 of his 19 points in the second half to lead Villanova to its fifth straight win.

Bryson Williams scored 17 points as Texas Tech held off a Texas late charge to earn a sweep of the regular-season series in the heated rivalry.

Clarence Nadolny added 14 points for the Red Raiders, who led by 10 with just over 3 minutes to play before the Longhorns got within 56-55 with a 9-0 run.

But Andrew Jones’ long 3-pointer with 1:10 to play was the last Texas field goal and Texas Tech put the game away from the free throw line.

Texas Tech (21-6, 10-4 Big 12) has won nine of the last 11 against the Longhorns in a rivalry that has grown only more intense since Chris Beard, the coach who led the Red Raiders to the national championship game in 2019, left to take over the Longhorns program this season.

Kofi Cockburn scored 27 points and Jacob Grandison had a season-high 24 as Illinois moved into a first-place tie with No. 5 Purdue in the Big Ten.

Cockburn scored in double figures for the 36th straight game for the Fighting Illini (19-7, 12-4 Big Ten), the third-longest such streak in the nation.

Tyson Walker scored a season-high 26 points and A.J. Hoggard had 15 for the Spartans (18-9, 9-6), who never led and trailed by as many as 16 points in the second half. Michigan State has lost four of five.

FAYETTEVILLE, Ark. (AP) -- Arkansas held Tennessee to two field goals in the final eight minutes and used a late 11-1 run to win for the 11th time in 12 games.

Zakai Zeigler had 12 points to lead Tennessee (19-7, 10-4), which suffered just its second loss since Jan. 15. Leading scorer Santiago Vescovi picked up his fourth foul midway through the second half and finished with seven points on 2-of-13 shooting. He was averaging 13.8.

COLUMBUS, Ohio (AP — Keegan Murray scored 24 points as Iowa used a big run early in the second half to pull away.

The Buckeyes (16-7, 9-5) pulled within six points with 2:40 remaining, but the Hawkeyes scored the final seven points.

Down 59-54 with under three minutes left, the Racers rallied. Williams capped the comeback with a layup and foul shot. Murray State made only two baskets in the final nine minutes.

Maldonado also had eight assists and seven rebounds, and Ike had 12 rebounds for the Cowboys (22-4, 11-2 Mountain West Conference).

A.J. Walker had 15 points and Jake Heidbreder 11 for the Falcons, who made nine 3s but were unable to overcome Maldonado and Ike’s dominant presence.

R.J. Cole and Tyler Polley each scored 16 points for UConn, which has won four of five.

Former UConn star James Bouknight, a rookie with the Charlotte Hornets, was tossed from his courtside seat by a game official in the second half. He was sitting in the front row opposite the Xavier bench and moved to the UConn student section.

No. 6 UConn shuts down Villanova for 20th Big East title

Cole rallies No. 21 UConn past No. 8 Villanova late

No. 2 Auburn cruises past Georgia to stay undefeated in SEC