Russia moved quickly Tuesday to secure its hold on Ukraine's rebel regions following the recognition of their independence with legislation allowing the deployment of troops there in a challenge to Western governments, which are preparing to announce sanctions against Moscow.

The new Russian bills, which are set to be quickly rubber-stamped by the Kremlin-controlled parliament, may set the stage for Russian troops to move deeper into Ukraine as the U.S. and its allies have feared.

Quickly after he signed the decree, convoys of armored vehicles were seen rolling across the separatist-controlled territories. It wasn’t immediately clear if they were Russian. 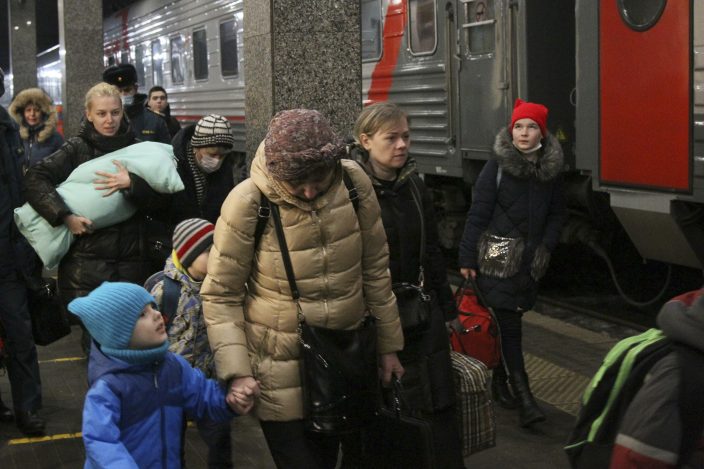 People from the Donetsk region, the territory controlled by pro-Russia separatist government in eastern Ukraine, leave a train to be taken to temporary housing, at the railway station in Nizhny Novgorod, Russia, Tuesday, Feb. 22, 2022. A long-feared Russian invasion of Ukraine appears to be imminent, if not already underway, with Russian President Vladimir Putin ordering forces into separatist regions of eastern Ukraine. (AP PhotoRoman Yarovitcyn)

President Vladimir Putin’s decision Monday to recognize the rebel regions as independent states follows a nearly eight-year old separatist conflict that has killed more than 14,000 and devastated Ukraine’s eastern industrial heartland called Donbas. The latest developments and move by Putin were met with reprehension by many countries around the world.

Ever since the conflict erupted weeks after Russia’s 2014 annexation of the Ukrainian Crimean Peninsula, Ukraine and its Western allies have accused Moscow of backing the separatists with troops and weapons, the charges it has denied, saying that Russians who fought in the east were volunteers. Putin’s move Monday formalizes Russia’s hold on the regions and gives it a free hand to deploy its forces there.

Several senior lawmakers suggested Tuesday that Russia could recognize the rebel-held territories in the Donetsk and Luhansk regions of Ukraine in their original administrative borders, including the chunks of land currently under the Ukrainian control. 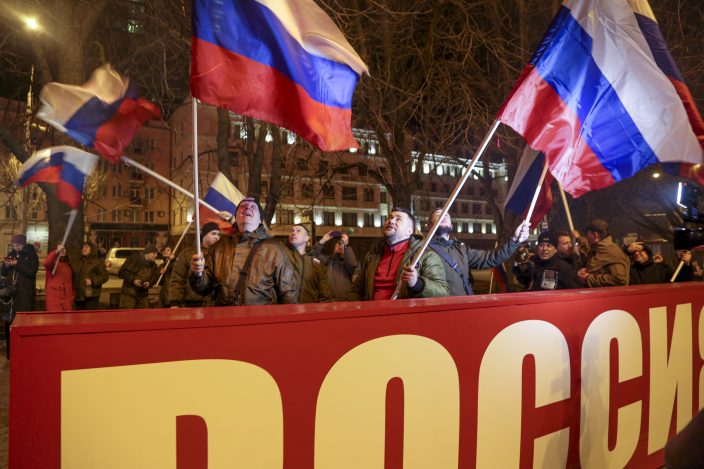 People wave Russian national flags celebrate behind a banner that reads "Russia", in the center of Donetsk, the territory controlled by pro-Russian militants, eastern Ukraine, late Monday, Feb. 21, 2022. In a fast-moving political theater, Russian President Vladimir Putin has moved quickly to recognize the independence of separatist regions in eastern Ukraine in a show of defiance against the West amid fears of Russian invasion in Ukraine. (AP PhotoAlexei Alexandrov)

Ukraine’s President Volodymyr Zelenskyy sought to project calm, telling the country in an address overnight: “We are not afraid of anyone or anything. We don’t owe anyone anything. And we won’t give anything to anyone.” His foreign minister, Dmytro Kuleba, would be in Washington on Tuesday to meet with Secretary of State Antony Blinken, the State Department said.

The White House responded quickly, issuing an executive order to prohibit U.S. investment and trade in the separatist regions, and additional measures — likely sanctions — were to be announced Tuesday. Those sanctions are independent of what Washington has prepared in the event of a Russian invasion, according to a senior administration official who briefed reporters on the condition of anonymity.

Britain and European Union countries have separately indicated that they also are planning to announce sanctions.

While Ukraine and the West said the Russian recognition of the rebel regions shatters a 2015 peace deal, Russia's ambassador to the United Nations, Vassily Nebenzia, challenged that, noting that Moscow isn't a party to the Minsk agreement and arguing that it could still be implemented if Ukraine chooses so.

The 2015 deal that was brokered by France and Germany and signed in Minsk, the Belarusian capital, required Ukraine to offer a sweeping self-rule to the rebel regions in a diplomatic coup for Russia after a series of Ukrainian military defeats. Many in Ukraine resented the deal as a betrayal of national interests and a blow to the country's integrity, and its implementation has stalled.

Putin announced the move in an hourlong televised speech, blaming the U.S. and its allies for the current crisis and describing Ukraine's bid to join NATO as an existential challenge to Russia.

“Ukraine’s membership in NATO poses a direct threat to Russia’s security,” he said.

Russia says it wants Western guarantees that NATO won’t allow Ukraine and other former Soviet countries to join as members — and Putin said Monday that a simple moratorium on Ukraine’s accession wouldn’t be enough. Moscow has also demanded the alliance halt weapons deployments to Ukraine and roll back its forces from Eastern Europe — demands flatly rejected by the West.

Putin warned Monday that the Western rejection of Moscow's demands gives Russia the right to take other steps to protect its security.

Sweeping through more than a century of history, Putin painted today’s Ukraine as a modern construct used by the West to contain Russia despite the neighbors inextricable links.

In a stark warning to Ukraine, the Russian leader charged that it has unfairly inherited Russia's historic land granted to it by the Communist rulers of the Soviet Union and mocked its effort to shed the Communist past in a so-called “decommunization” campaign.

“We are ready to show you what the real decommunization would mean for Ukraine,” Putin added ominously in an apparent signal of his readiness to raise new land claims.

With an estimated 150,000 Russian troops massed on three sides of Ukraine, the U.S. has warned that Moscow has already decided to invade. Still, President Joe Biden and Putin tentatively agreed to a meeting brokered by French President Emmanuel Macron in a last-ditch effort to avoid war.

Macron’s office said Biden and Putin had “accepted the principle of such a summit,” to be followed by a broader meeting that would include other “relevant stakeholders to discuss security and strategic stability in Europe.”

If Russia moves in, the meeting will be off, but the prospect of a face-to-face summit resuscitated hopes in diplomacy to prevent a conflict that could devastate Ukraine and cause huge economic damage across Europe, which is heavily dependent on Russian energy.

Tensions have continued to fly high in eastern Ukraine, with more shelling reported along the tense line of contact between the rebels and Ukrainian forces. Ukraine's military have rejected the rebel claims of shelling residential areas and insisted that Ukrainian forces weren’t returning fire.

Follow AP’s coverage of the Ukraine crisis at https://apnews.com/hub/russia-ukraine