Some of the perks from winning for the first time on the PGA Tour are obvious, whether it's a seven-figure check or a two-year exemption. For tournaments offering full FedEx Cup points, there's always that invitation to the Masters.

One other perk isn't as obvious until the next tournament.

Instead of having among the first tee times, winners move into the group of other PGA Tour winners in the middle of the draw.

Sepp Straka is a good example. He was in the second group off Thursday morning last week at the Honda Classic with two other players who have not won on tour. He birdied two of his last three holes for a one-shot victory, and now he's headed to the Masters.

The first stop is the Arnold Palmer Invitational, where Straka is playing the opening two rounds with Rory McIlroy and Adam Scott, both major champions, former world No. 1 players who have combined for 57 worldwide wins between them.

Max Homa won his first PGA Tour event at the Wells Fargo Championship in 2019. In his next PGA Tour event, he played alongside Rickie Fowler and Bryson DeChambeau. 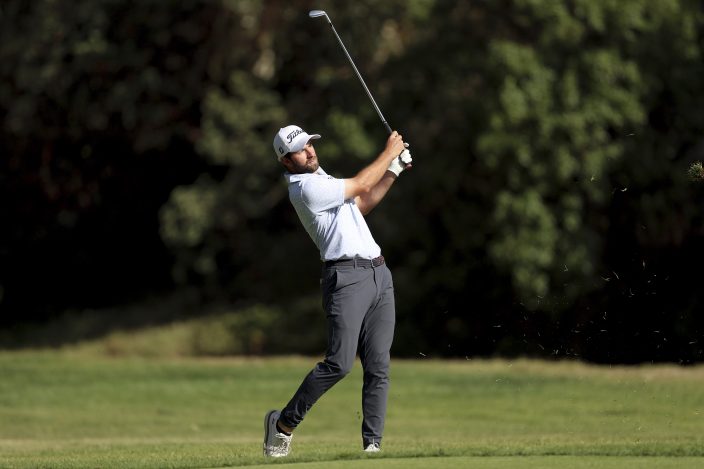 Cameron Young hits his second shot on the 13th hole during the third round of the Genesis Invitational golf tournament at Riviera Country Club, Saturday, Feb. 19, 2022, in the Pacific Palisades area of Los Angeles. (AP PhotoRyan Kang)

“It's a big deal," Homa said. “It's fun. We play as kids and we picture playing with Tiger and Phil, so it is cool.”

Scottie Scheffler was thinking more about the timing. He was in a different situation from Homa and Straka because he played in the Masters and even the Sentry Tournament of Championship before winning for the first time at the Phoenix Open.

The next stop was Riviera, where the first tee time was 6:40 a.m. and the range had to be illuminated for the early starters. The clubhouse usually doesn't open until 5 a.m. A year ago, Scheffler was in the second group off at 6:51 a.m. He was in the middle of the draw this year alongside Jordan Spieth and Jon Rahm.

“My trainer and I were pretty excited about not being in that little ‘first-off’ group, which is nice. Get a few more minutes of sleep,” Scheffler said. “Those tee times are tough. You're warming up literally in the dark basically until you tee off.”

Zach Johnson believes there are moments early in a career that give players a shot of confidence. On the day he was announced as the U.S. Ryder Cup captain, that took him to his first time playing in the matches at The K Club in Ireland in 2006.

It was Friday afternoon during the leadoff foursomes match with Chad Campbell against the Irish duo of Padraig Harrington and Paul McGinley.

The situation was dire. They were 2 down on the par-5 16th hole, where the River Liffey separates the fairway from the green. Campbell hit a good drive and while Johnson could get home in two with a pure 3-wood, he wasn’t entirely comfortable with the shot. He was thinking about laying up.

“Captain (Tom) Lehman pulls up, asked me where we were in the match,” Johnson said. “We were 2 down with three go. ‘What’s the discussion then?’ is really what it got down to. And he just gave me a nice piece of advice. He’s like: ‘You’re here for a reason. Just hit it.’”

Johnson said the shot came off better than he imagined onto the green. They won the hole with a birdie. Johnson holed a 15-foot birdie putt to halve the 17th and a 4-foot birdie on the 18th to halve the match.

“That’s the shot I go back to that I think really helped give me confidence in the most trying of situations,” Johnson said. “But also one that just kind of molded me and said, ‘Hey, you belong.’”

Cameron Young tied for second at Riviera and followed with a tie for 16th at the Honda Classic. In two weeks, he moved up 62 spots in the world ranking to No. 51.

Young will get in The Players Championship next week from being 15th in the FedEx Cup standings this year (which is used to fill the 144-man field). He also is a lock for the Dell Match Play two weeks later, the final date to make the top 50 for the Masters.

The bubble for getting into the Masters is getting crowded.

Seamus Power is at No. 47. Harold Varner III went to No. 45 in the world by winning the Saudi International, only to miss the cut in his next two tournaments. He's down to No. 49.

Further up is Cameron Tringale, who narrowly finished outside the top 50 at the end of last year, which would have earned a spot in the Masters.

The LPGA Tour is spending two straight weeks in Los Angeles and making it easy on fans.

The JTBC LA Open returns for the fourth year to Wilshire Country Club on April 21-24. The following week is the inaugural JTBC Championship at Palos Verdes Golf Club.

Both tournaments have a $1.5 million purse and offer the “LA LPGA Dual Ticket” that will give spectators a weekly grounds pass to both tournaments. It will be the first time one ticket is good for two tournaments.

Wilshire is among the few courses to hold tournaments for the PGA Tour, LPGA Tour and PGA Tour Champions. Palos Verdes has held a women’s college event for 25 years. This will be the club’s first professional tournament.

One of the more underrated pieces of technology is the smartphone, which allows for instant feedback when used to record the golf swing.

Ben Crane at 45 is old enough to appreciate that.

“I used to video my swing on a little cassette,” Crane said. “I would drive to the FedEx box and drop it in the mail so it would arrive the next day to my coach in Palm Springs. He’d get it at 10 a.m. and by 11 a.m. he’d call me."

Crane said that was only 20 years ago.

“And now, literally he’s watching me live on the range.”

The Mexico Open in Puerto Vallarta received a big boost Tuesday when Jon Rahm, the No. 1 player in the world, committed to the April 28-May 1 tournament. ... The British Masters, Soudal Open in Belgium, Dutch Open and Porsche European Open in Germany will be the four European tour events that offer 10 spots to the U.S. Open from a special points list. They will be played over five weeks, with the PGA Championship in middle of them and not counting toward the list. ... Longtime golf writer and author Michael Bamberger has been selected to receive the Memorial Golf Journalism Award. ... The European tour has added two tournaments in Spain in consecutive weeks in late April. The second one, the Catalunya Championship on April 28 to May 1, replaces the Volvo China Open. ... Six players have not defended PGA Tour titles this season. The latest are Bryson DeChambeau (Bay Hill), who withdrew with an injury and Branden Grace, who is not defending in Puerto Rico because he was eligible for Bay Hill.

The average world ranking of PGA Tour winners this year is 81. The range of world ranking when they won goes from No. 15 (Scottie Scheffler) to No. 176 (Sepp Straka).

“I don't think you need a hostile takeover to change the game.” — Seth Waugh, CEO of the PGA of America.