There was a time when Karim Benzema was jeered by Real Madrid fans for not tapping all his talent, for not scoring enough goals, for not rising to the challenge.

Even though he had quieted most of his critics in recent years, nobody can ever again doubt the France striker after he etched his name into the club's long Champions League lore.

Benzema scored a hat trick in just 18 minutes on Wednesday night to oust a stunned Paris Saint-Germain and keep the Spanish club in contention for both the European Cup and Spanish league title. 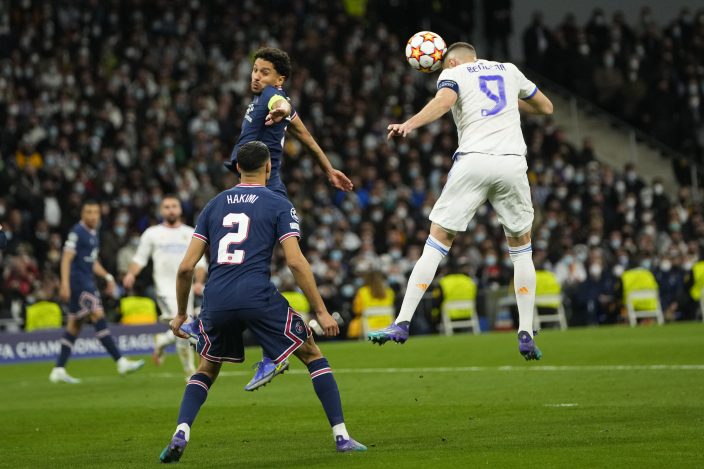 Real Madrid's Karim Benzema misses as he heads on goal during the Champions League, round of 16, second leg soccer match between Real Madrid and Paris Saint-Germain at the Santiago Bernabeu stadium in Madrid, Spain, Wednesday, March 9, 2022. (AP PhotoManu Fernandez)

For a game and a half, Kylian Mbappé was leading PSG toward a commanding win with a stellar two-goal display that showed why both rivals so desperately want soccer’s brightest star on their squad next season.

That was until Benzema led Madrid roaring back in a whirlwind second-half rally for a 3-2 aggregate victory.

“We lost the first leg and we were 1-0 down at halftime today, but the strength of the fans drove us on," Benzema said. "We gave it everything we had out on the pitch until the end.” 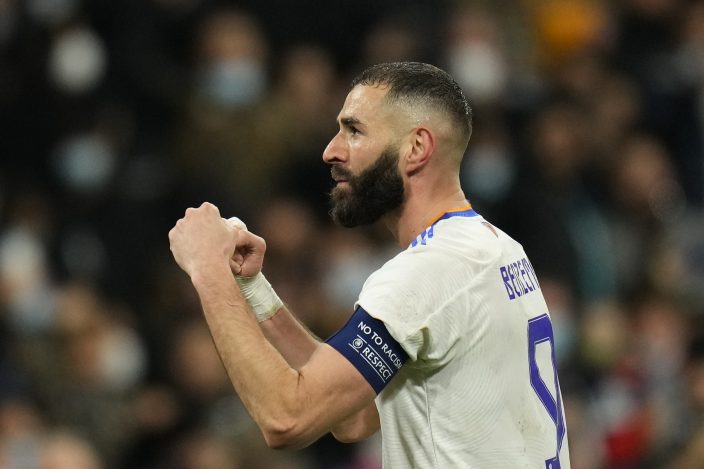 PSG was left yet again with only the French league to play for after another European failure despite the efforts of its Qatari owners to assemble the most talented attack in the world with Lionel Messi added last summer to play alongside Mbappé and Neymar. The defeat came five years after PSG suffered a shocking second-leg collapse at Camp Nou when Barcelona made history with a 6-1 victory.

Led by Benzema, Madrid has now gained some huge momentum as it seeks a double of a potential 14th European Cup and bids to reclaim the Spanish league title.

Next up for Madrid is the humble Mallorca, which will welcome the Spanish leaders in the domestic competition on Monday.

During the three-and-a-half seasons since the departure of Cristiano Ronaldo, Benzema has established himself as Madrid’s undisputed leader thanks to his goals and his character on the field. Not even a guilty verdict in a sex-tape blackmail plot against a former France teammate in November has shaken his superb form.

While Messi, who like Benzema is 34, has his best years behind him, Benzema has only gotten better.

Benzema has scored 30 times in 33 appearances this season for Madrid. He leads the Spanish league with 20 goals, seven more than his nearest chasers.

And his treble against PSG made him the oldest player to score a Champions League hat trick at 34 years, 80 days. It also moved him ahead of Alfredo Di Stéfano into third place on the club’s all-time scoring list with 309 goals.

Sevilla visits Rayo Vallecano on Sunday trailing Madrid by eight points. Sevilla has blown several chances to close the gap after being held to draws in all four of its previous road games.

Mallorca is in 16th place and just two points from the relegation zone. The Balearic Islands club, which was promoted for the start of this season, is on its worst run of the campaign after losing four consecutive games.

“Every game is a final for us, both in La Liga and the Champions League. Real Madrid is alive,” Benzema said. “When the pressure is on, with every man doing his job and the fans behind us, we can beat anyone.”

Mbappé must now decide if he remains in Paris or moves to Spain’s capital. Some Madrid fans applauded when he was introduced before Wednesday’s match, with hopes that he can become their next superstar.

But it was Benzema who proved that Madrid already has what it needs to win titles right now.

Revived by Xavi, Barcelona hosts Sevilla for 2nd in league