Giroud has scored 11 goals in all competitions since joining Milan from Chelsea in the offseason but it is his ability to do it in big matches that could prove to be the difference for the Rossoneri.

The Milan forward netted two in a 2-1 victory against defending champion Inter Milan at the beginning of February and did it again last weekend with the only goal in a 1-0 win at Napoli that sent his team two points clear at the top of Serie A. 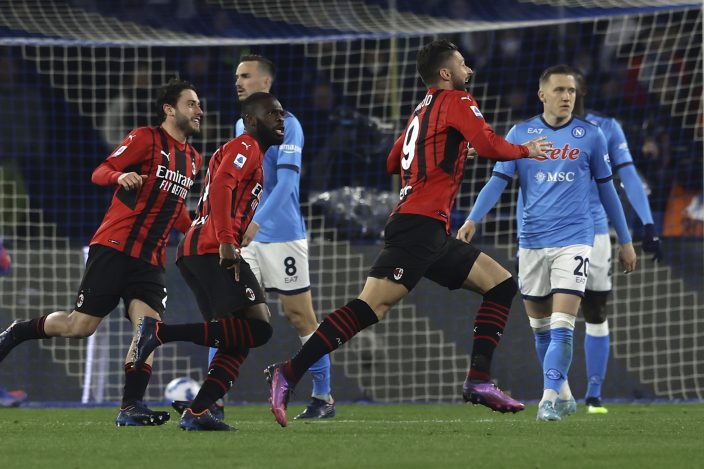 Olivier Giroud of Milan celebrates after scoring goal 0-1 during the Serie A soccer match between Napoli and AC Milan, at the Diego Armando Maradona stadium in Naples, Italy, Sunday, March 6, 2022. (Alessandro GarofaloLaPresse via AP)

“I try to do my job. When I’m in the area I always try to be in the right place at the right time,” Giroud said.

That was certainly where he was at the Stadio Diego Armando Maradona as Davide Calabria’s scuffed shot was going wide before Giroud showed great reflexes to deflect it into the bottom corner.

Milan plays mid-table Empoli on Saturday and will be looking to preserve its advantage over Inter, which has played a match less. Napoli is only three points behind the Rossoneri.

“They (the three points) were worth a lot because it was a match against a rival for the title,” Giroud said. “It wasn’t decisive but it was very important to win.”

No wonder Giroud was all smiles when he was spotted outside Milan’s headquarters earlier this week. He posed for photos with fans and when one asked him if Milan would win the title this year, he responded with a grin: “Yes, of course.”

Giroud was signed partly as a backup to Zlatan Ibrahimović. But, with the 40-year-old Ibrahimović having spent large portions of the season sidelined with injury, Giroud has found himself a regular in the team. 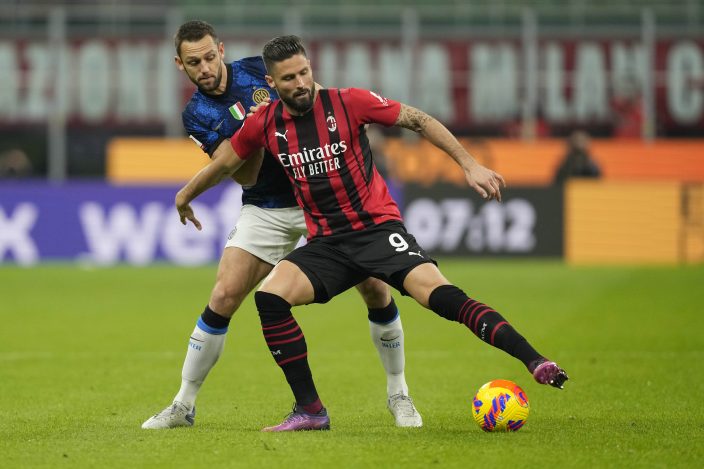 Ibrahimović, who helped Milan to second place in Serie A last season, returned from his latest injury in the dying stages of Sunday’s match. But Giroud is not concerned about the competition for a starting role between the two aging forwards.

“I don’t want to think about who will play,” the 35-year-old Giroud said. “My job is also to be a big brother for the young players.

“We have a lot of quality in the team but sometimes we need to talk a bit more. I try to do these things because I know the importance of communicating and talking between us.”

Giroud indeed has that experience from a long and glittering career: he won three FA Cups with Arsenal and also lifted that trophy with Chelsea, as well as winning the Champions League and Europa League.

He also helped France win the World Cup in 2018.

But Giroud has only won a league title once, with Montpellier in France in 2012. That was the year after Milan’s last Serie A title before the storied club’s downturn in fortunes.

Giroud is ready to end that wait for both him and the club.

“We are here,” he said. “We are three teams within three points of each other so I think we have to take it game by game and we are still in the running.

“I don’t want to talk about the title yet but we hope to win something this year… the cup, the title. We are ambitious and we’ll go right to the end.”

Perišić driving Inter Milan forward in Europe and Serie A

Dethroned Juventus hosts Milan with CL hopes on the line