Two years into the COVID-19 pandemic, most of the world has seen a dramatic improvement in infections, hospitalizations and death rates in recent weeks, signaling the crisis appears to be winding down. But how will it end? Past epidemics may provide clues.

The ends of epidemics are not as thoroughly researched as their beginnings. But there are recurring themes that could offer lessons for the months ahead, said Erica Charters of the University of Oxford, who studies the issue.

“One thing we have learned is it’s a long, drawn-out process” that includes different types of endings that may not all occur at the same time, she said. That includes a “medical end,” when disease recedes, the “political end,” when government prevention measures cease, and the “social end,” when people move on. FILE - Only 3 of the 31 members of a seventh grade class at the Grebey Junior High School in Hazleton, Penn., Oct. 16, 1957. All public schools here have been closed for the remainder of the week because of the many absences caused by an influenza-like illness that has been plaguing the region. Teacher and pupils are unidentified. (AP PhotoFile)

The COVID-19 global pandemic has waxed and waned differently in different parts of the world. But in the United States, at least, there is reason to believe the end is near.

About 65% of Americans are fully vaccinated, and about 29% are both vaccinated and boosted. Cases have been falling for nearly two months, with the U.S. daily average dropping about 40% in the last week alone. Hospitalizations also have plummeted, down nearly 30%. Mask mandates are vanishing — even federal health officials have stopped wearing them — and President Joe Biden has said it’s time for people to return to offices and many aspects of pre-pandemic life.

But this pandemic has been full of surprises, lasting more than two years and causing nearly 1 million deaths in the U.S. and more than 6 million around the world. Its severity has been surprising, in part because many people drew the wrong lesson from a 2009-2010 flu pandemic that turned out to be nowhere as deadly as initially feared. 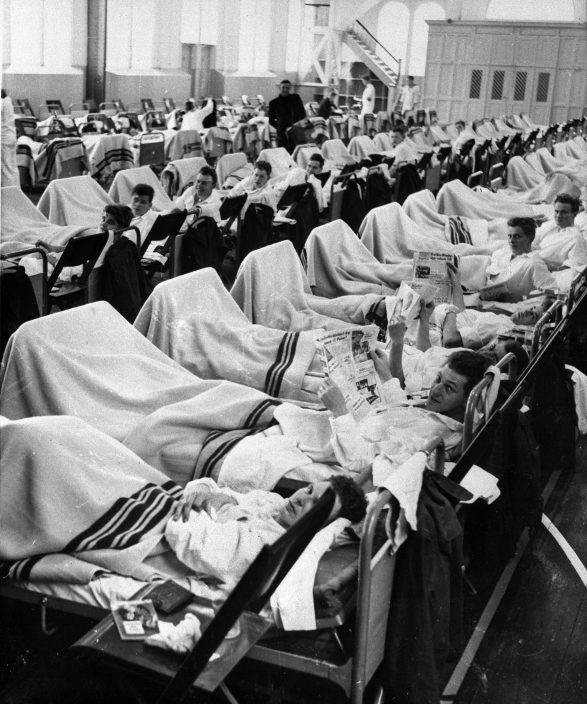 FILE - Danish personnel suffering from influenza occupy beds in temporary sick quarters set up in a gymnasium at Copenhagen's naval shipyard to handle the large amount of patients on Oct. 12, 1957. (AP PhotoFile)

“We got all worried but then nothing happened (in 2009), and I think that was what the expectation was" when COVID-19 first emerged, said Kristin Heitman, a Maryland-based researcher who collaborated with Charters.

That said, some experts offered takeaways from past epidemics that may inform how the end of the COVID-19 pandemic may play out. 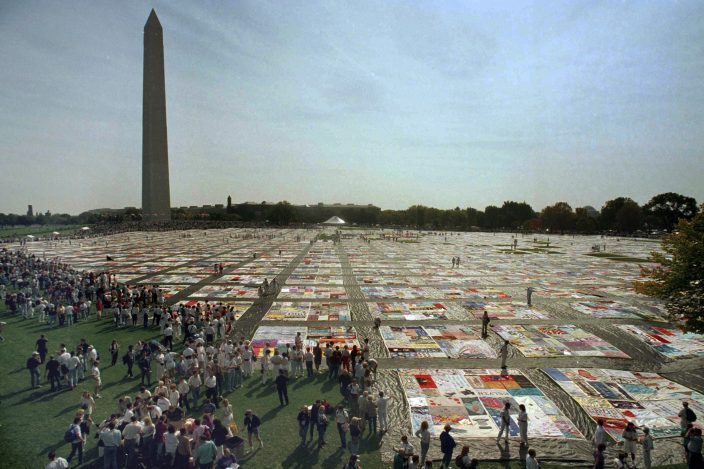 A new flu in 2009 caused another pandemic, but one that turned out not to be particularly dangerous to the elderly — the group that tends to die the most from flu and its complications. Ultimately, fewer than 13,000 U.S. deaths were attributed to that pandemic.

The World Health Organization in August 2010 declared the flu had moved into a post-pandemic period, with cases and outbreaks moving into customary seasonal patterns. 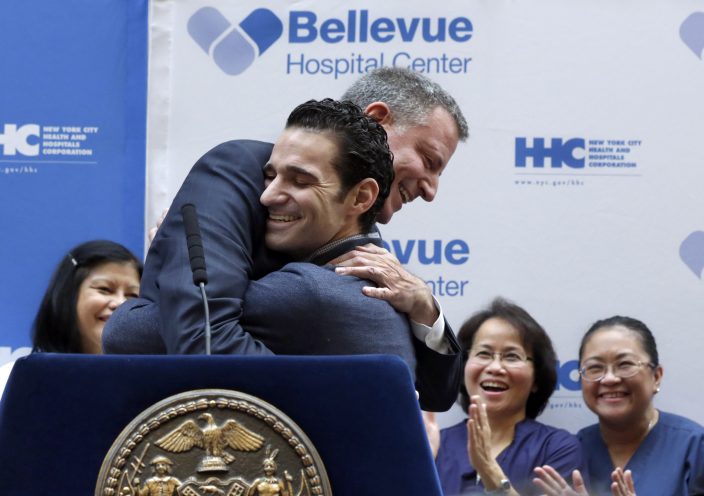 FILE - Dr. Craig Spencer, foreground, who was the first Ebola patient in New York City, is hugged by New York Mayor Bill de Blasio during a news conference at Bellevue Hospital, Tuesday, Nov. 11, 2014 in New York, during his release, 19 days after he was diagnosed with the virus. The physician had been working with Doctors Without Borders. (AP PhotoRichard Drew, File)

In each case, the pandemics waned as time passed and the general population built immunity. They became the seasonal flu of subsequent years. That kind of pattern is probably what will happen with the coronavirus, too, experts say. 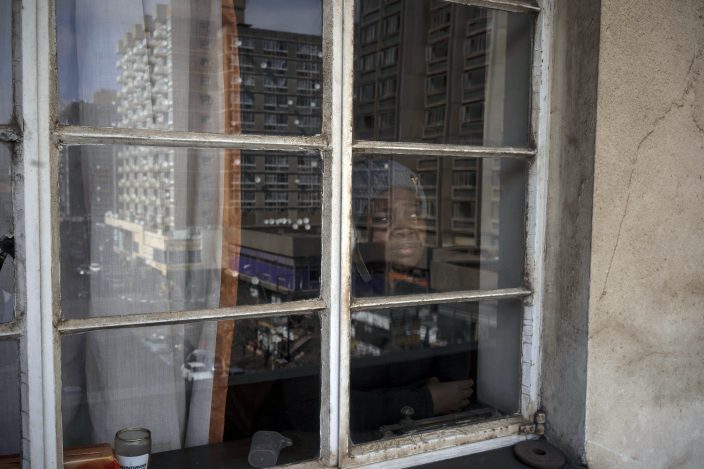 FILE - Sibongile Zulu poses for a portrait inside her home in Johannesburg, South Africa, Tuesday, July 28, 2020. Zulu is HIV positive and couldn't get her full medication for two months due to a lack of stock in government pharmacies. (AP PhotoBram Janssen, File)

In 1981, U.S. health officials reported a cluster of cases of cancerous lesions and pneumonia in previously healthy gay men in California and New York. More and more cases began to appear, and by the next year officials were calling the disease AIDS, for acquired immune deficiency syndrome.

Researchers later determined it was caused by HIV — human immunodeficiency virus — which weakens a person’s immune system by destroying cells that fight disease and infection. For years, AIDS was considered a terrifying death sentence, and in 1994 it became the leading cause of death for Americans ages 25 to 44.

But treatments that became available in the 1990s turned it into a manageable chronic condition for most Americans. Attention shifted to Africa and other parts of the world, where it was not controlled and is still considered an ongoing emergency. 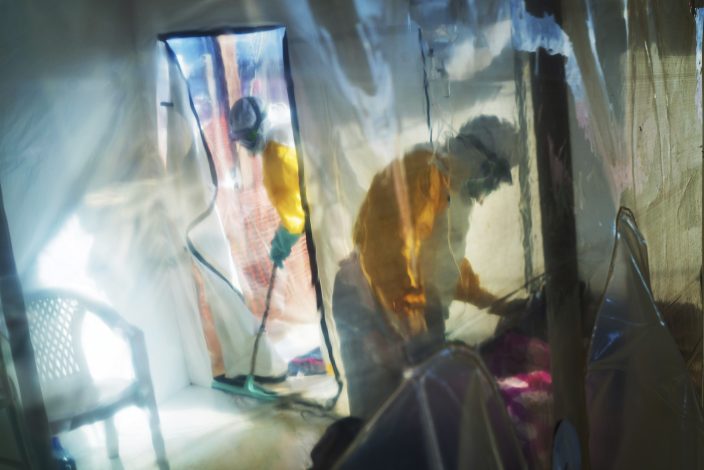 Pandemics don’t end with a disease ebbing uniformly across the globe, Charters said. “How a pandemic ends is generally by becoming multiple (regional) epidemics," she said.

In 2015, Brazil suffered an outbreak of infections from Zika virus, spread by mosquitoes that tended to cause only mild illness in most adults and children. But it became a terror as it emerged that infection during pregnancy could cause a birth defect that affected brain development, causing babies to be born with unusually small heads. 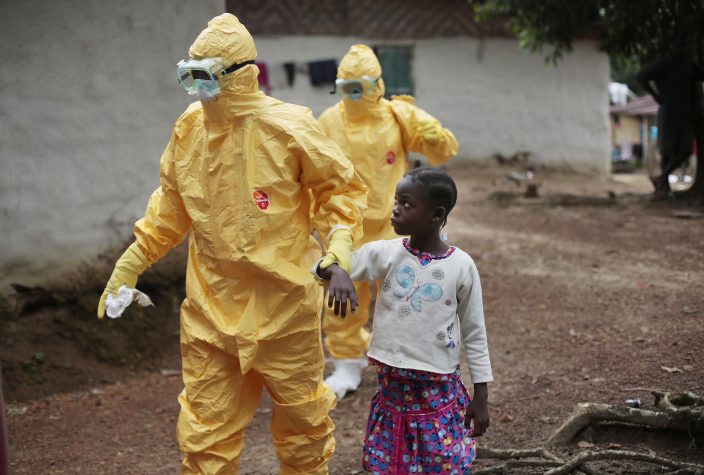 FILE - Nowa Paye, 9, is taken to an ambulance after showing signs of the Ebola infection in the village of Freeman Reserve, about 30 miles north of Monrovia, Liberia,Tuesday Sept. 30, 2014. (AP PhotoJerome Delay, File)

By late that year, mosquitoes were spreading it in other Latin American countries, too. In 2016, the WHO declared it an international public health emergency, and a U.S. impact became clear. The Centers for Disease Control and Prevention received reports of 224 cases of Zika transmission by mosquitoes in the continental United States and more than 36,000 in U.S. territories — the vast majority in Puerto Rico.

But the counts fell dramatically in 2017 and virtually disappeared shortly after, at least in the U.S. Experts believe the epidemic died as people developed immunity. “It just sort of burned out” and the pressure for making a Zika vaccine available in the U.S. ebbed, said Dr. Denise Jamieson, a former CDC official who was a key leader in the agency’s responses to Zika.

It’s possible Zika will be a dormant problem for years but outbreaks could occur again if the virus mutates or if larger numbers of young people come along without immunity. With most epidemics, “there’s never a hard end,” said Jamieson, who is now chair of gynecology and obstetrics at Emory University’s medical school.

The Geneva-based WHO declared COVID-19 a pandemic on March 11, 2020, and it will decide when enough countries have seen a sufficient decline in cases — or, at least, in hospitalizations and deaths — to say the international health emergency is over.

The WHO has not yet announced target thresholds. But officials this week responded to questions about the possible end of the pandemic by noting how much more needs to be accomplished before the world can turn the page.

COVID-19 cases are waning in the U.S., and dropped globally in the last week by 5%. But cases are rising in some places, including the United Kingdom, New Zealand and Hong Kong.

People in many countries need vaccines and medications, said Dr. Carissa Etienne, director of the Pan American Health Organization, which is part of the WHO.

In Latin America and the Caribbean alone, more than 248 million people have not yet had their first dose of COVID-19 vaccine, Etienne said during a press briefing with reporters. Countries with low vaccination rates likely will see future increases in illnesses, hospitalizations and deaths, she said.

“We are not yet out of this pandemic,” said Dr. Ciro Ugarte, PAHO's director of health emergencies. “We still need to approach this pandemic with a lot of caution.”

The Associated Press Health & Science Department receives support from the Howard Hughes Medical Institute’s Department of Science Education. The AP is solely responsible for all content.

'Get used to it': Outbreaks give taste of living with virus

Experts worry about how US will see next COVID surge coming