Embiid was a game-time decision with a sore back, but showed no signs of the injury on his 28th birthday. The All-Star center shot 13 of 19 from the field and had five assists in 35 minutes.

Darius Garland had 22 points and seven assists for the Cavaliers. 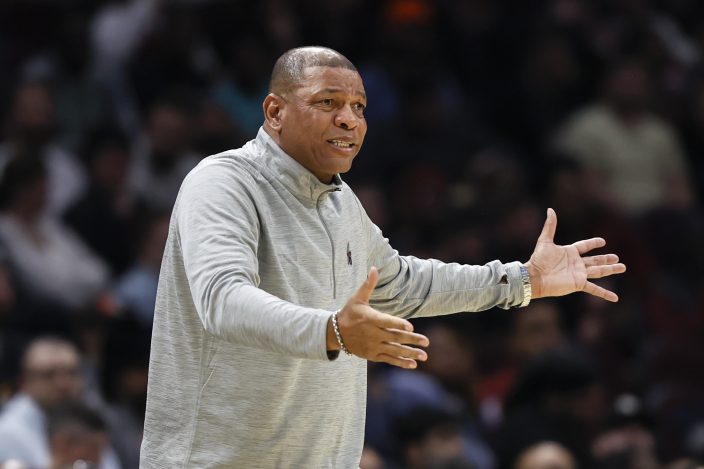 Philadelphia 76ers coach Doc Rivers argues a call during the second half of the team's NBA basketball game against the Cleveland Cavaliers, Wednesday, March 16, 2022, in Cleveland. (AP PhotoRon Schwane)

Nikola Jokic had 29 points and 13 rebounds in an efficient 26-minute performance to help Denver cruise past Washington.

Jokic reached 10,001 career NBA points — all with Denver — and added eight assists while falling two shy of his 19th triple-double the season. He shot 10 of 14 from the floor, hitting both 3-pointers and all seven foul shots he attempted.

LaMelo Ball had 22 points, 11 assists and eight rebounds, P.J. Washington scored 13 of his 16 points in the fourth quarter and Charlotte beat Atlanta for its third straight victory.

Montrezl Harrell added 20 points off the bench and Terry Rozier and Miles Bridges each had 18 points.

Clint Capella had 17 points and 15 rebounds for the Hawks. Trae Young had 15 assists but was held to nine points on 3-of-12 shooting.