Iran has converted a fraction of its stockpile of highly enriched uranium into material crucial for detecting cancers and other diseases, the U.N. nuclear watchdog and an Iranian media report said Friday.

Iran's decision to convert the uranium takes it out of a form that can potentially be further refined into weapons-grade levels. The development comes as talks in Vienna over restoring Tehran's nuclear deal with world powers hang in the balance.

Negotiators previously said they had reached the end of a monthslong effort to find a way to bring both the United States and Iran back into the accord — just as a Russian demand threw the talks into a chaotic pause. 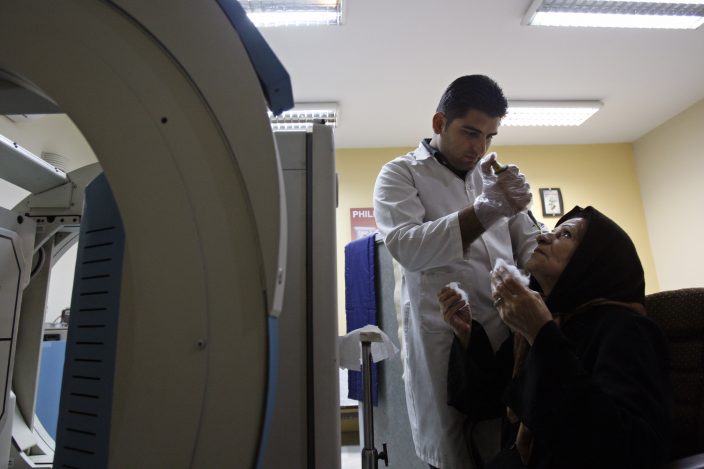 FILE— In this Oct. 11, 2010, file photo, Iranian nuclear medicine Kouhyar Gervand, drops technetium-99 into eyes of Zahra Kohanmanesh, for her eye scan, at the Shariati hospital, in Tehran, Iran. Iran has converted a fraction of its stockpile of highly enriched uranium into material that can detect cancers and other diseases. That's according to the United Nations’ nuclear watchdog and an Iranian media report on Friday, March 18, 2022. (AP PhotoVahid Salemi, File)

Since then, Iran and the United Kingdom agreed to a prisoner release and news of the decision by Tehran to reprocess the uranium appears to signal that the negotiations may still see the parties return to Vienna and reach a deal. However, Israel, Iran's archrival in the Mideast, has increasingly criticized efforts to revive the accord.

In a statement Friday, the International Atomic Energy Agency said Iran had used 2.1 kilograms (4.6 pounds) of its 60% enriched uranium to produce so-called "highly enriched uranium targets" at a facility in Isfahan. Those “targets” will be irradiated at the Tehran Research Reactor and later used to produce molybdenum-99, the IAEA said.

Molybdenum-99 decays within days into a form of an isotope called technetium-99m, which is used in scans that can detect cancer and assess blood supply to the heart. In the U.S., technetium-99m is used in over 40,000 medical procedures a day, according to the Energy Department.

Increasingly, countries around the world use low-enriched uranium to create the needed isotope to avoid the proliferation risks of employing highly enriched uranium.

Iran's semiofficial Mehr news agency, quoting unnamed officials it referred to as “informed sources,” acknowledged that some of this material had been reprocessed. The report added that 2 kilograms (4.41 pounds) of the material could help 1 million people. The IAEA said that as of Feb. 19, Iran had a stockpile of 33.2 kilograms (73.19 pounds) of 60% enriched uranium — material a short, technical step from weapons-grade levels of 90%.

“The materials converted to ‘target,’ was irradiated, and has no danger of spreading, and Western countries cannot criticize Iran over this,” the Mehr report said.

Under the 2015 accord, Iran agreed to cap its enrichment as 3.67%, end the use of advanced centrifuges and maintain a stockpile of 300 kilograms (661 pounds) under the scrutiny of the IAEA.

As of Feb. 19, Iran had a stockpile of 2,883 kilograms (6,355 pounds) with ever-more advanced centrifuges spinning. While Iran long has maintained its program is peaceful, the West and the IAEA say Tehran had an organized military nuclear program that broke up in 2003.

Using the 60% enriched uranium to create isotope material means “for all practical purposes” it can’t be reconstituted for the wider stockpile, said Daryl G. Kimball, the executive director of the Washington-based Arms Control Association.

However, he stressed that to bring Iran back to the levels of the 2015 deal, its stockpile would need to be again shipped abroad.

“It may be that at this delicate juncture in the negotiations — the 11th hour — Iran is trying to suggest that it has some better intentions here,” Kimball told The Associated Press. “This may be an effort to show that they’re interested in working out a deal.”

But, he added that “it also may be a justification ex post facto to enrich uranium to 60%. It may be a way to create a cover story for what they’ve already done, which they weren’t supposed to do.”

In Israel on Friday, a joint statement from Prime Minister Naftali Bennett and Foreign Minister Yair Lapid warned the U.S. against potentially lifting a terrorism designation on Iran's paramilitary Revolutionary Guard. That's been a remaining demand of Iran and the subject of the final negotiations in Vienna.

“The attempt to delist the IRGC as a terrorist organization is an insult to the victims and would ignore documented reality supported by unequivocal evidence,” the Israeli statement said, using an acronym for the Guard. “We find it hard to believe that the IRGC’s designation as a terrorist organization will be removed in exchange for a promise not to harm Americans.”

EU envoy in Tehran amid hopes to restore nuclear agreement