Kevin Durant scored 38 points, Seth Curry returned to the lineup with seven 3-pointers in his best game as a Net, and Brooklyn rallied to beat the Portland Trail Blazers 128-123 on Friday night.

Curry finished with 27 points, his most since coming from Philadelphia last month in the trade headlined by James Harden and Ben Simmons. Curry had missed the previous three games with left ankle soreness.

Andre Drummond and Bruce Brown each added 17 points for the Nets, playing again without Kyrie Irving at home. They bounced back from their loss at the buzzer to Dallas on Wednesday and won for the fifth time in six games. 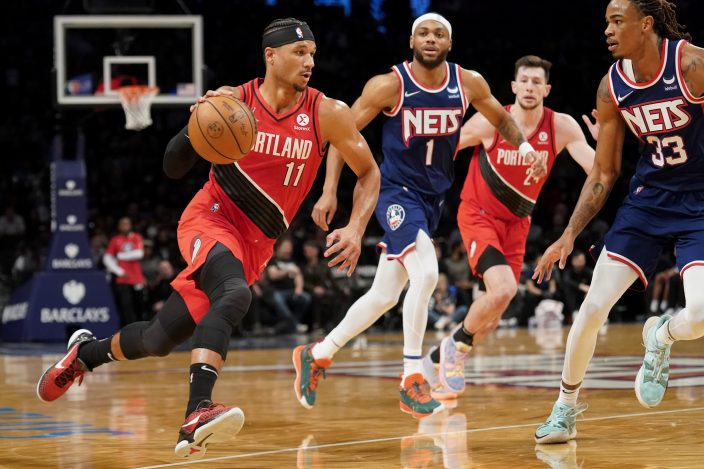 Josh Hart scored 25 points for the Trail Blazers, who led by 18 early in the second half but couldn’t hold on and lost their third straight. Brandon Williams added 24 points.

LeBron James scored 19 of his 36 points in the fourth quarter and overtime, Russell Westbrook had 22 points, 10 rebounds, and 10 assists and Los Angeles beat Toronto to snap a three-game losing streak.

Avery Bradley hit a go-ahead 3-pointer with 32.5 seconds left in the extra session, putting the Lakers up 125-123, then added a pair of free throws after a turnover by Toronto rookie Scottie Barnes.

Barnes had 31 points and 17 rebounds. Toronto had won five in a row.

Embiid was 11 of 20 from the floor. Harden also had seven rebounds. Tobias Harris added 14 points, Georges Niang had 12 and Matisse Thybulle 10.

Jalen Brunson, the former Villanova star who played a good portion of his college home games at the Wells Fargo Center, hit his first seven shots and led Dallas with 24 points. He finished 10 of 14.

Shai Gilgeous-Alexander played through ankle soreness and scored 26 points for the injury-depleted Thunder. They have dropped eight straight and reached the 50-loss mark in back-to-back seasons.

Wright, filling in for Young, provided a big boost for Atlanta, which is clinging to the 10th spot in the Eastern Conference and final spot in the play-in tournament. Wright had five steals and six assists.

Young was held out becawith a bruised left quad

Mobley scored nine of his 27 points in OT and had 11 rebounds for Cleveland. All-Star Darius Garland had 25 points and 14 assists, and Markkanen added 10 rebounds and four steals.

Jokic had 32 points, 10 rebounds and eight assists, but committed a turnover and missed a shot in the final 1:40 of the extra period. Denver lost on the road for the first time since Feb. 11 at Boston.

Kentavious Caldwell-Pope missed a potential game-tying 3-pointer at the buzzer for the Wizards. They have lost six straight.

Kristaps Porzingis had 18 points and 11 rebounds for Washington.

Jonas Valanciunas had 16 points and 12 rebounds and Jaxson Hayes also scored 16 points for New Orleans. The Pelicans won for the second time in seven games.

Devin Vassell had 18 points and Dejounte Murray had 17 for San Antonio. The Spurs dropped 2 1/2 games behind New Orleans for the 10th and the final berth in the play-in tournament.

Christian Wood had 32 points, 13 rebounds and seven assists for the Rockets.