Tyrese Maxey scored 13 of his 28 points in the fourth quarter, including nine in a row during a crucial stretch, and the short-handed Philadelphia 76ers — without stars Joel Embiid and James Harden — beat the Eastern Conference-leading Miami Heat 113-106 on Monday night.

Shake Milton had 20 points and Furkan Korkmaz added 18 for Philadelphia, which pulled within 2½ games of the Heat in the standings. Embiid sat out with back soreness and Harden with left hamstring tightness.

Jimmy Butler scored 27 points, Bam Adebayo had 22 and Kyle Lowry 20 for Miami, which lost for just the fifth time in 20 games. 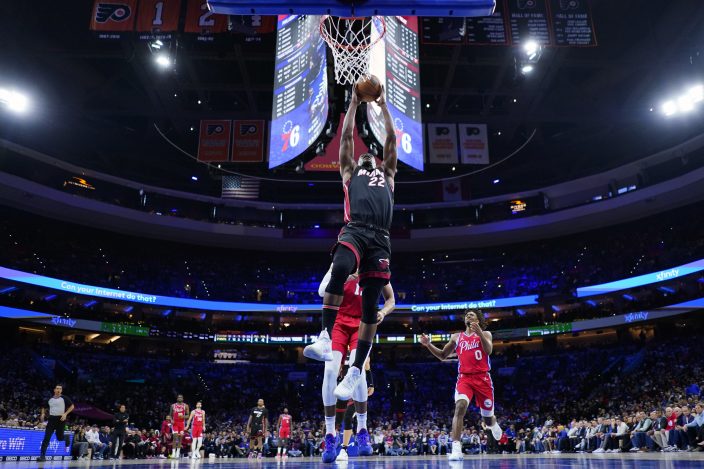 Miami Heat's Jimmy Butler (22) goes up for a shot during the second half of an NBA basketball game against the Philadelphia 76ers, Monday, March 21, 2022, in Philadelphia. (AP PhotoMatt Slocum)

LeBron James scored 38 points in a triple-double and sparked memories of his time in Cleveland, leading Los Angeles over the Cavaliers.

It was James’ only visit home this season — other than the All-Star Game last month — and the star from nearby Akron thrilled fans who warmly welcomed him back. James played 11 seasons in two stints with the Cavs, trying to get back to the playoffs for the first time since he left in 2018. 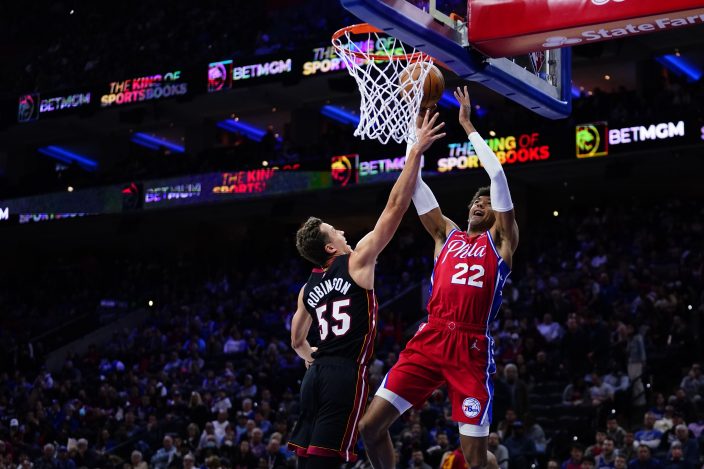 Philadelphia 76ers' Matisse Thybulle, right, goes up for a shot against Miami Heat's Duncan Robinson during the second half of an NBA basketball game, Monday, March 21, 2022, in Philadelphia. (AP PhotoMatt Slocum)

James added 10 rebounds and 12 assists for his 105th career triple-double and sixth this season.

Russell Westbrook and D.J. Augustin added 20 points apiece for the Lakers, who came in tied for ninth in the Western Conference.

Darius Garland scored 29 and added 16 assists for Cleveland, which came in leading Toronto by one game for the No. 6 spot in the East. The Cavs play the Raptors on Thursday night. 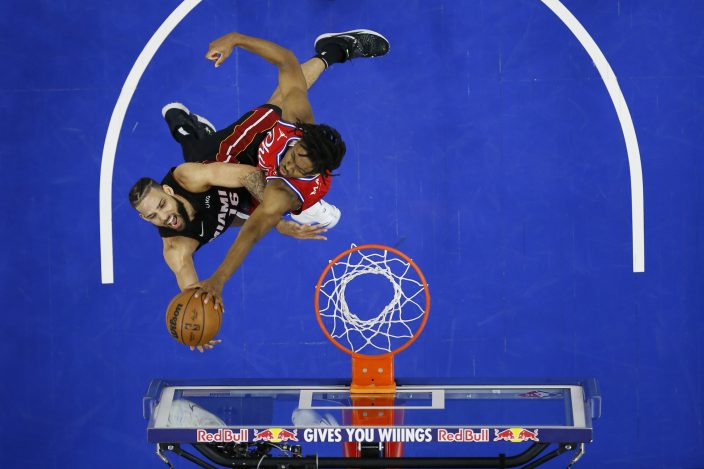 Miami Heat's Caleb Martin, left, cannot get a shot past Philadelphia 76ers' Tyrese Maxey during the second half of an NBA basketball game, Monday, March 21, 2022, in Philadelphia. (AP PhotoMatt Slocum)

Kevin Durant had 37 points, nine rebounds and eight assists, and Brooklyn beat Utah for its sixth win in seven games.

Bruce Brown added 22 points for the Nets, who stayed in sole possession of eighth place in the Eastern Conference. Nic Claxton, starting for ailing center Andre Drummond, made all five shots and scored 11 in the Nets’ 38-point third quarter that broke open the game.

Donovan Mitchell scored 30 for the Jazz, who had their three-game winning streak snapped. Jordan Clarkson added 19 and Mike Conley had 18 points and seven assists after sitting out a victory Sunday at New York to rest his right knee.

LaMelo Ball and Terry Rozier each scored 17 points and Charlotte came back to beat New Orleans for its fifth straight win.

Miles Bridges added 15 points and Mason Plumlee had 11 points and 10 rebounds for the Hornets, who trailed most of the second half and overcame 17 turnovers.

CJ McCollum scored 27 points and Jonas Valanciunas had 24 points and 18 rebounds for the Pelicans, who took an 84-76 lead into the fourth quarter.

Cade Cunningham had two key turnovers down the stretch, and Brandon Williams’ layup put the Trail Blazers up 116-112 with 47.8 seconds to go.

The teams combined for an NBA season-high 90 free throws.

Portland had lost 10 of 11 and was missing its top seven scorers this season.

Cunningham and Saddiq Bey scored 25 apiece for the Pistons, who lost for the sixth time in seven games.