As coronavirus infections rise in some parts of the world, experts are watching for a potential new COVID-19 surge in the U.S. — and wondering how long it will take to detect.

—As more people take rapid COVID-19 tests at home, fewer people are getting the gold-standard tests that the government relies on for case counts. 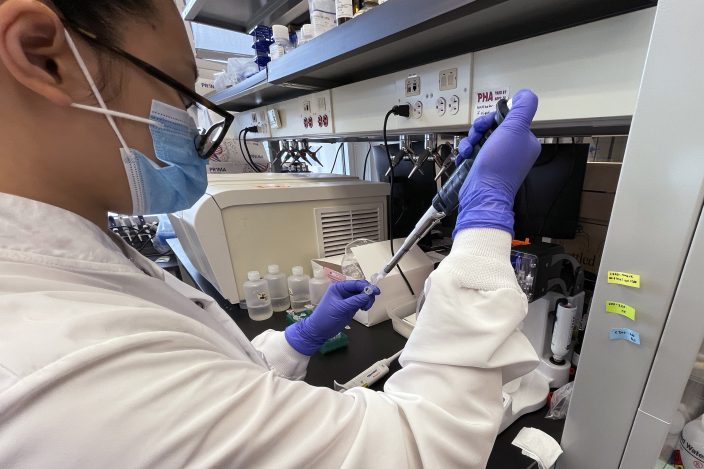 Emily Lu, a student in the environment science graduate program at Ohio State, tries to extract ribonucleic acid (RNA) from wastewater samples to test for fragments of the coronavirus, March 23, 2022 at a school lab in Columbus, Ohio. (AP PhotoPatrick Orsagos)

—The Centers for Disease Control and Prevention will soon use fewer labs to look for new variants.

—Health officials are increasingly focusing on hospital admissions, which rise only after a surge has arrived.

—A wastewater surveillance program remains a patchwork that cannot yet be counted on for the data needed to understand coming surges. 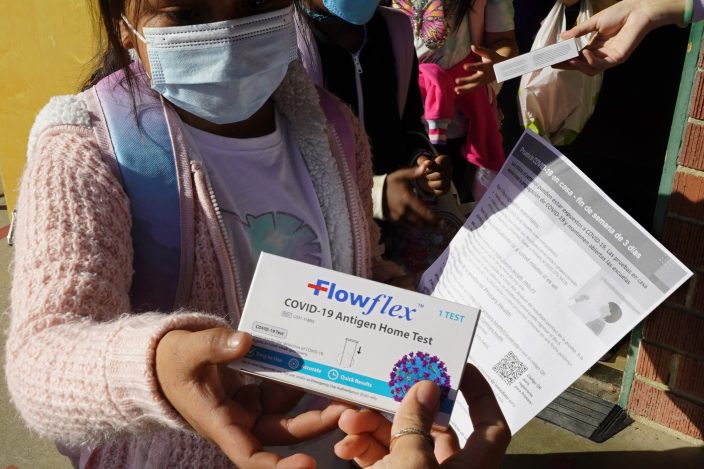 FILE - A second grade student is give a at-home COVID-19 test at H.W. Harkness Elementary School in Sacramento, Calif., Friday, Feb. 11, 2022. The Sacramento City Unified School District began distributing the tests to elementary and middle school students, and families are to submit the results before returning to class. (AP PhotoRich Pedroncelli)

—White House officials say the government is running out of funds for vaccines, treatments and testing.

Scientists acknowledge that the wide availability of vaccines and treatments puts the nation in a better place than when the pandemic began, and that monitoring has come a long way. 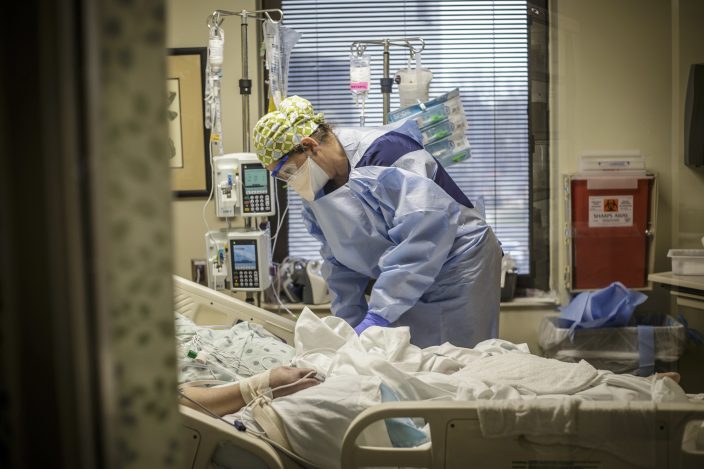 For example, scientists this week touted a 6-month-old program that tests international travelers flying into four U.S. airports. Genetic testing of a sample on Dec. 14 turned up a coronavirus variant — the descendant of omicron known as BA.2 — seven days earlier than any other reported detection in the U.S.

More good news: U.S. cases, hospitalizations and deaths have been falling for weeks.

But it’s different elsewhere. The World Health Organization this week reported that the number of new coronavirus cases increased two weeks in a row globally, likely because COVID-19 prevention measures have been halted in numerous countries and because BA.2 spreads more easily. 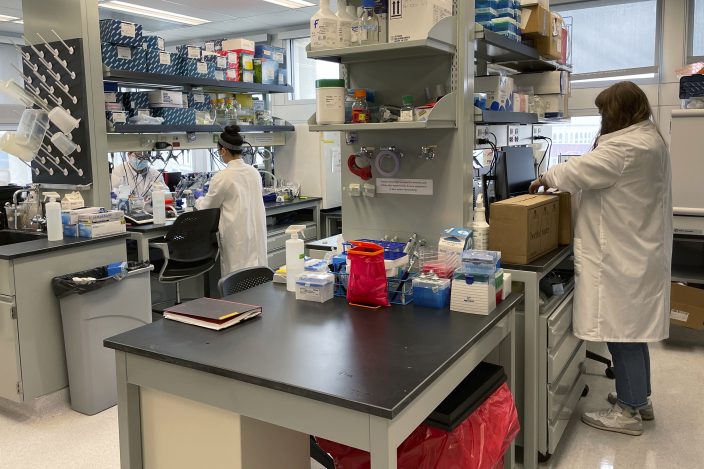 Some public health experts aren't certain what that means for the U.S.

BA.2 accounts for a growing share of U.S. cases, the CDC said — more than one-third nationally and more than half in the Northeast. Small increases in overall case rates have been noted in New York, and in hospital admissions in New England.

Some of the northern U.S. states with the highest rates of BA.2, however, have some of the lowest case rates, noted Katriona Shea of Penn State University.

Dr. James Musser, an infectious disease specialist at Houston Methodist, called the national case data on BA.2 “murky.” He added: “What we really need is as much real-time data as possible ... to inform decisions.”

Here’s what COVID-19 trackers are looking at and what worries scientists about them.

Tallies of test results have been at the core of understanding coronavirus spread from the start, but they have always been flawed.

Initially, only sick people got tested, meaning case counts missed people who had no symptoms or were unable to get swabbed.

Home test kits became widely available last year, and demand took off when the omicron wave hit. But many people who take home tests don't report results to anyone. Nor do health agencies attempt to gather them.

Mara Aspinall is managing director of an Arizona-based consulting company that tracks COVID-19 testing trends. She estimates that in January and February, about 8 million to 9 million rapid home tests were being done each day on average — four to six times the number of PCR tests.

Nuzzo said: “The case numbers are not as much a reflection of reality as they once were.”

In early 2021, the U.S. was far behind other countries in using genetic tests to look for worrisome virus mutations.

A year ago, the agency signed deals with 10 large labs to do that genomic sequencing. The CDC will be reducing that program to three labs over the next two months.

The weekly volume of sequences performed through the contracts was much higher during the omicron wave in December and January, when more people were getting tested, and already has fallen to about 35,000. By late spring, it will be down to 10,000, although CDC officials say the contracts allow the volume to increase to more than 20,000 if necessary.

The agency also says turnaround time and quality standards have been improved in the new contracts, and that it does not expect the change will hurt its ability to find new variants.

“It’s really quite a substantial reduction in our baseline surveillance and intelligence system for tracking what’s out there," said Bronwyn MacInnis, director of pathogen genomic surveillance at the Broad Institute of MIT and Harvard.

An evolving monitoring system is looking for signs of coronavirus in sewage, which could potentially capture brewing infections.

Researchers have linked wastewater samples to the number of positive COVID-19 tests a week later, suggesting health officials could get an early glimpse at infection trends.

Some health departments also have used sewage to look for variants. New York City, for example, detected signals of the omicron variant in a sample taken on Nov. 21 — about 10 days before the first case was reported in the U.S.

But experts note the system doesn't cover the entire country. It also doesn't distinguish who is infected.

“It's a really important and promising strategy, no doubt. But the ultimate value is still probably yet to be understood," said Dr. Jeff Duchin, the health officer for Seattle/King County, Washington.

Last month, the CDC outlined a new set of measures for deciding whether to lift mask-wearing rules, focusing less on positive test results and more on hospitals.

Hospital admissions are a lagging indicator, given that a week or more can pass between infection and hospitalization. But a number of researchers believe the change is appropriate. They say hospital data is more reliable and more easily interpreted than case counts.

The lag also is not as long as one might think. Some studies have suggested many people wait to get tested. And when they finally do, the results aren’t always immediate.

Spencer Fox, a University of Texas data scientist who is part of a group that uses hospital and cellphone data to forecast COVID-19 for Austin, said “hospital admissions were the better signal” for a surge than test results.

There are concerns, however, about future hospital data.

If the federal government lifts its public health emergency declaration, officials will lose the ability to compel hospitals to report COVID-19 data, a group of former CDC directors recently wrote. They urged Congress to pass a law that will provide enduring authorities “so we will not risk flying blind as health threats emerge.”

The Associated Press Health & Science Department receives support from the Howard Hughes Medical Institute’s Department of Science Education. The AP is solely responsible for all content.

'Get used to it': Outbreaks give taste of living with virus

How will COVID end? Experts look to past epidemics for clues