Gulf Arab states were to gather for a summit Tuesday about the yearslong war in Yemen, which the country’s Houthi rebels are boycotting because it’s taking place in Saudi Arabia, their adversary in the conflict.

The decision by the Iran-backed Houthis to skip the summit, called by the Saudi-based Gulf Cooperation Council, immediately called into question the effectiveness of such a gathering.

The United Nations, diplomats and others have been pushing for another potential cease-fire to mark the Muslim holy month of Ramadan, similar to efforts for a truce over the past years. Ramadan is likely to start this weekend, depending on the sighting of the new crescent moon. 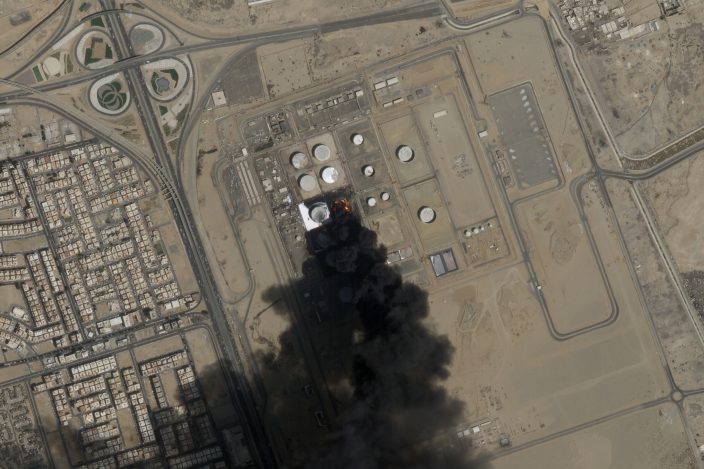 This satellite photo from Planet Labs PBC shows a fire still burning at Saudi Aramco's North Jiddah Bulk Plant after an attack by Yemen's Houthi rebels ahead of a Formula One race in Jiddah, Saudi Arabia, Saturday, March 26, 2022. Authorities pledged Saturday that the F1 race would go on Sunday. (Planet Labs PBC via AP)

The GCC — a six-nation club including Bahrain, Kuwait, Oman, Qatar, Saudi Arabia and the United Arab Emirates — was to hold closed-door talks Tuesday in Riyadh. On Monday, the GCC's Secretary-General Nayef al-Hajraf held talks with British Ambassador to Yemen Richard Oppenheim and Yemeni officials allied with its internationally recognized but exiled government.

Those talks saw al-Hajraf, a Kuwaiti politician, discuss “efforts to stop the war and ways to achieve comprehensive peace to alleviate the human suffering witnessed by Yemeni people,” according to the state-run Saudi Press Agency.

The Houthis, meanwhile, have rejected the summit because of its venue in Saudi Arabia, as well as the continuing closure of Sanaa's airport and restrictions on the country's ports by the Saudi-led coalition that is waging war on the Houthis. 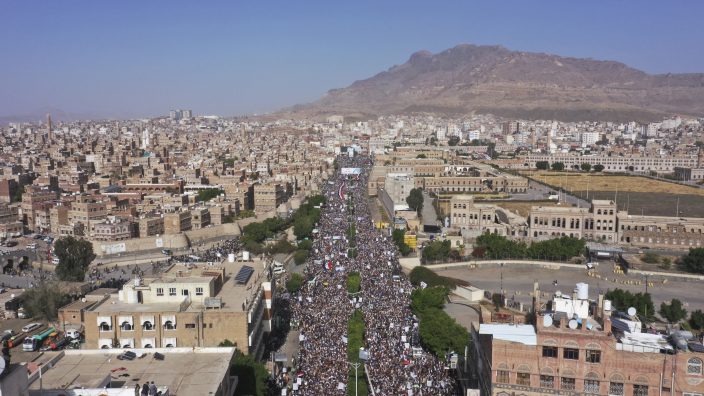 The rebels, who over the weekend attacked an oil depot in the Saudi city of Jiddah ahead of a Formula One race there, have called for the talks to be held in a “neutral” country.

“The Saudi regime must prove its seriousness towards peace ... by responding to a cease-fire, lifting the siege and expelling foreign forces from our country,” Houthi spokesman Mohammad Abdul-Salam wrote on Twitter. “Then peace will come and it is time to talk about political solutions in a calm atmosphere away from any military or humanitarian pressure.”

Yemen’s war began in September 2014, when the Houthis swept into the capital, Sanaa, from their northwestern stronghold in the Arab world’s poorest country. The Houthis then pushed into exile the government of President Abed Rabbo Mansour Hadi, elected in 2012 as the sole candidate after the long rule of Ali Abdullah Saleh.

A Saudi-led coalition, including the UAE, entered the war in March 2015 to try and restore Hadi's government to power. But the war stretched into long bloody years, pushing Yemen to the brink of famine.

More than 150,000 people have been killed in the warfare, according to the Armed Conflict Location and Event Data Project. Those include both fighters and civilians; the most-recent figure for the civilian death toll in Yemen’s conflict stands at 14,500.

Also, Saudi airstrikes have killed hundreds of civilians and targeted the country’s infrastructure. The Houthis have used child soldiers and indiscriminately laid landmines across the country.

UN envoy arrives in Yemen's capital for talks with rebels