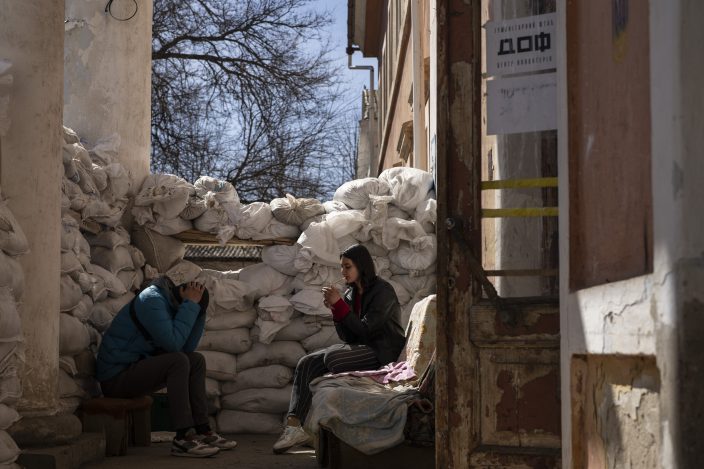 A volunteer smokes next to sandbags using for protection, at a Ukrainian volunteer center in Mykolaiv, southern Ukraine, on Monday, March 28, 2022. Ukrainian volunteers have set up a center to supply army and civilians with clothes, food, medicines and makeshift bullet proof vests. (AP PhotoPetros Giannakouris)

ARMY-SEX ABUSE — A civilian who held sensitive positions with the U.S. Army in Arizona and Afghanistan led a child sex abuse ring that involved his own adopted son. An Associated Press investigation finds that the U.S. Army and the state of Arizona missed or ignored multiple red flags over more than a decade. By Michael Rezendes. SENT: 2,540 words, photos. An abridged version of 830 words is also available.

PANDEMIC AFRICA-LESOTHO-WOMEN FACTORY WORKERS — When the coronavirus pandemic hit the world two years ago, the global fashion industry crumpled. Faced with collapsing demand, brands canceled orders worth billions of dollars and few felt the effects so harshly as the tens of millions of workers, most of them women, who stitched the world’s clothes. This is especially true in the southern African country of Lesotho where the clothing industry is the country’s largest private employer, and more than 80% of its workers are women. By Majirata Latela and Ryan Lenora Brown. UPCOMING: 1,800 words, photos, video by 5 a.m. An abridged version of 1,060 words will also be available. 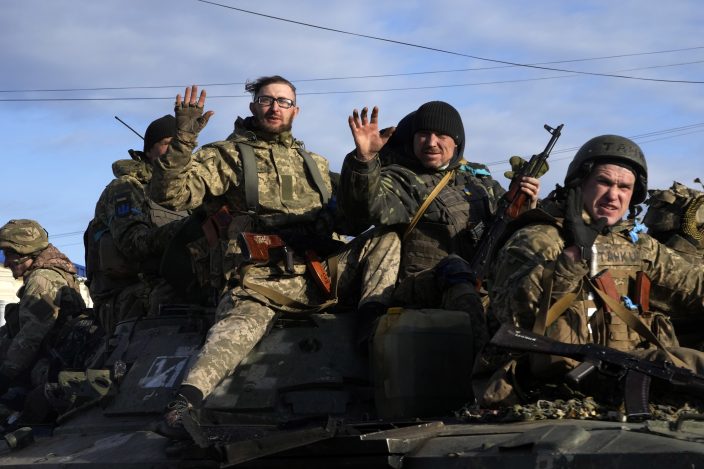 Ukrainian soldiers ride a tank through the town of Trostsyanets, some 400 km eastern of capital Kyiv, Ukraine, Monday, March 28, 2022. The more than month-old war has killed thousands and driven more than 10 million Ukrainians from their homes — including almost 4 million from their country. (AP PhotoEfrem Lukatsky)

RUSSIA-UKRAINE-WAR — Another round of talks aimed at stopping the war in Ukraine is scheduled as the fighting looks increasingly like a stalemate. The two sides have traded control of a town in the east and a suburb of the capital. Ukrainians said they retook Irpin, northwest of Kyiv, from Russian troops, and President Volodymyr Zelenskyy said the Russians were regrouping to take the area back. The talks are to be held in Istanbul. Ahead of the meeting, the Ukrainian president said his country is prepared to declare its neutrality, as Moscow has demanded, and is open to compromise on the fate of the Donbas, the contested region in the country’s east. By Yuras Karmanau. SENT: 1,040 words, photos, videos. 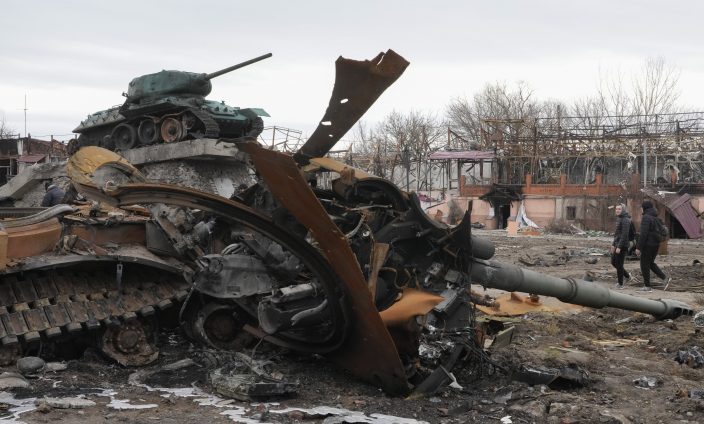 Local residents pass by a damaged Russian tank in the town of Trostsyanets, some 400km (250 miles) east of capital Kyiv, Ukraine, Monday, March 28, 2022. The monument for Second World War is seen background. The more than one-1month-old war has killed thousands and driven more than 10 million Ukrainians from their homes including almost 4 million from their country. (AP PhotoEfrem Lukatsky)

RUSSIA-UKRAINE-WAR-FIGHTING FOR FOOD — There’s a second front line that runs through the farmland of western Ukraine, far from the daily resistance against Russia’s invasion. As planting season has arrived, farmers are trying to feed not only their country, but the world. Countries in the Middle East, Asia and Africa are reliant on affordable supplies of wheat and other grains from Ukraine. The demands on Ukrainian farmers are enormous, and the challenges keep growing. By Cara Anna and Aya Batrawy. SENT: 1,070 words, photos.

MIDEAST-UKRAINE-DOUBLE STANDARDS — Within days of the Russian invasion, Western countries invoked international law, imposed crippling sanctions, began welcoming refugees with open arms and cheered on Ukraine’s armed resistance. The response has elicited outrage across the Middle East, where many see a glaring double standard in how the West responds to international conflicts. By Joseph Krauss. SENT: 1,130 words, photos. Also see MORE ON RUSSIA-UKRAINE WAR below. For full coverage.

BIDEN-BUDGET — President Joe Biden’s $5.8 trillion budget for next year would trim federal deficits and boost taxes on the wealthiest Americans. Both could appeal to West Virginia Sen. Joe Manchin amid Democratic hopes of reviving talks with him over the party’s derailed social and environment plan. By Alan Fram. SENT: 980 words, photos. With BIDEN-BUDGET-DEFENSE — Pentagon may need more budget funding to help Ukraine. 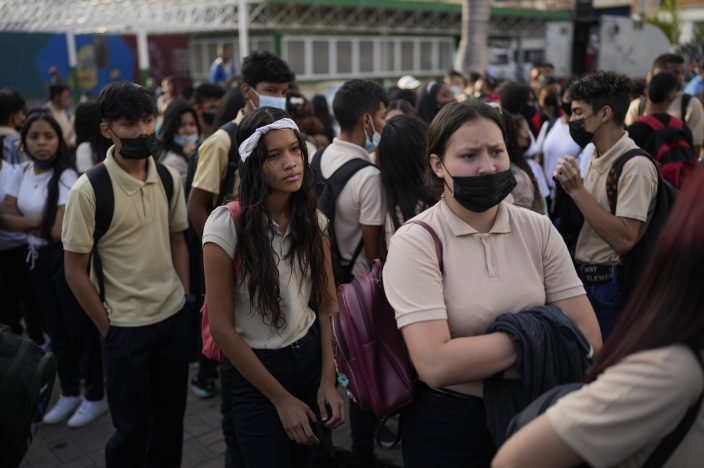 Public school students wait to enter their school, Fermin Toro, in Caracas, Venezuela, Monday, March 28, 2022 on the first day that the school is open to the entire student body. President Nicolas Maduro announced that March 28 is the date all students will return to in-person classes after schools operated at half capacity due to the ongoing COVID-19 pandemic. (AP PhotoAriana Cubillos)

OSCARS-ASSUMING THE UNREAL — In the minutes and hours after Will Smith accosted and slapped Chris Rock before a live Oscars audience of millions, many people hurried to social media platforms. They had a breathless and emphatic hot take. Surely, they insisted, the whole thing was staged. Hollywood, the illusion factory, had churned out some unexpected reality. And — surprise — a lot of people thought it was another illusion. America has dealt with years of immersive special effects, reality TV and now an era of misinformation. And the question those things produce is more pertinent than ever: What around here is real? By National Writer Ted Anthony. SENT: 1,180 words, photos. With OSCARS-WILL-SMITH — Will Smith apologizes: “I was out of line and I was wrong."

VIRUS-OUTBREAK-CHINA — A two-phase lockdown of Shanghai’s 26 million people is testing the limits of China’s hard-line “zero-COVID” strategy, which is shaking markets far beyond the country’s borders. By Ken Moritsugu. SENT: 760 words, photos. 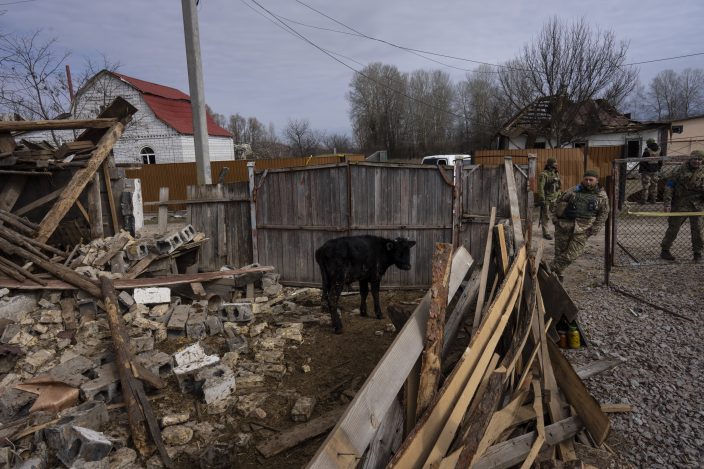 A soldier stands in the entrance of a farm destroyed after a Russian attack near Brovary, on the outskirts of Kyiv, Ukraine, Monday, March 28, 2022. (AP PhotoRodrigo Abd)

VIRUS OUTBREAK-HONG KONG-COFFINS — Hong Kong’s deadliest coronavirus outbreak has cost about 6,000 lives this year – and the city is now running out of coffins. SENT: 420 words, photos. 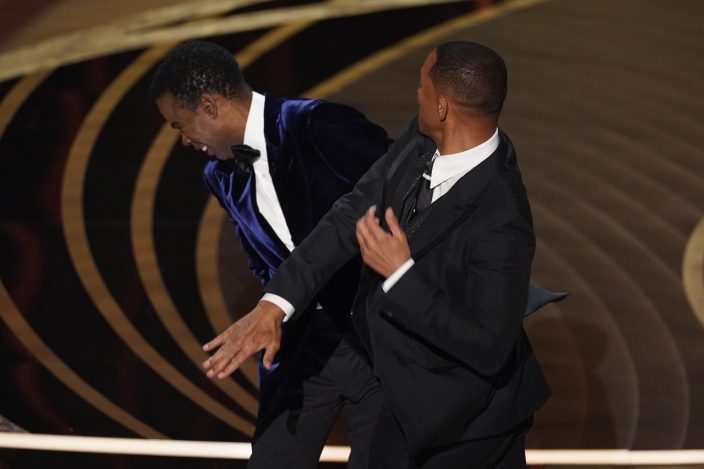 Will Smith, right, hits presenter Chris Rock on stage while presenting the award for best documentary feature at the Oscars on Sunday, March 27, 2022, at the Dolby Theatre in Los Angeles. (AP PhotoChris Pizzello)

TRUMP LAWSUIT STRATEGY — Donald Trump’s lawsuit last week accusing his 2016 rival Hillary Clinton and the Democratic Party of conspiring to sink his successful campaign by alleging ties to Russia — ties that have been extensively substantiated — is the latest in a long strategy in which he has used the legal system to fight battles against potential opponents. SENT: 1,700 words, photos. An abridged version of 1,200 words has also been sent.

CAPITOL RIOT-CONTEMPT — The House committee investigating the Jan. 6, 2021, attack on the U.S. Capitol votes unanimously to hold two men who served as advisers to Trump in contempt of Congress. SENT: 980 words, photos.

CONGRESS-DON YOUNG — The late Alaska Rep. Don Young, who died earlier this month at 88, is honored by former colleagues as he joins the select few chosen to lie in state at the U.S. Capitol. SENT: 710 words, photos. UPCOMING: 900 words after 10:30 a.m. arrival at Capitol.

SUPREME-COURT-NOMINATION — The Senate Judiciary Committee is pushing Ketanji Brown Jackson closer to confirmation, setting up a vote next week to recommend her nomination to the full Senate and seat her as the first Black woman on the Supreme Court. SENT: 630 words, photos.

CALIFORNIA REPARATIONS — California’s first-in-the-nation task force is scheduled to define who is eligible for reparations after an emotional vote in February that led members to hold off on the question until the March meeting. SENT: 900 words, photos. UPCOMING: Developing from 11:30 a.m. meeting.

HUNGARY ELECTION VOTE COUNTERS — A grassroots civic initiative in Hungary, concerned over the integrity of an upcoming election, has recruited more than 20,000 ballot counters to observe the high-stakes contest on April 3 in which nationalist Prime Minister Viktor Orban will seek a fourth consecutive term. SENT: 840 words, photos.

YEMEN — Gulf Arab states were to gather for a summit about the yearslong war in Yemen, which the country’s Houthi rebels are boycotting because it’s taking place in Saudi Arabia, their adversary in the conflict. SENT: 520 words, photos.

FINANCIAL MARKETS — Asian shares were mostly higher in muted trading ahead of another round of peace talks between Russia and Ukraine. By Business Writer Elaine Kurtenbach SENT: 620 words, photo.

CONSUMER CONFIDENCE — The Conference Board reports on U.S. consumer confidence for March. By Business Writer Matt Ott. UPCOMING: 130 words after release of report at 10 a.m., then expanded, photo.

INSPIRE CHANGE — When the NFL launched its Inspire Change program in 2017, the goal was to reach $250 million over 10 years in its commitment to social justice initiatives. The league is almost five years ahead of schedule. By Pro Football Writer Barry Wilner. SENT: 460 words, photo.