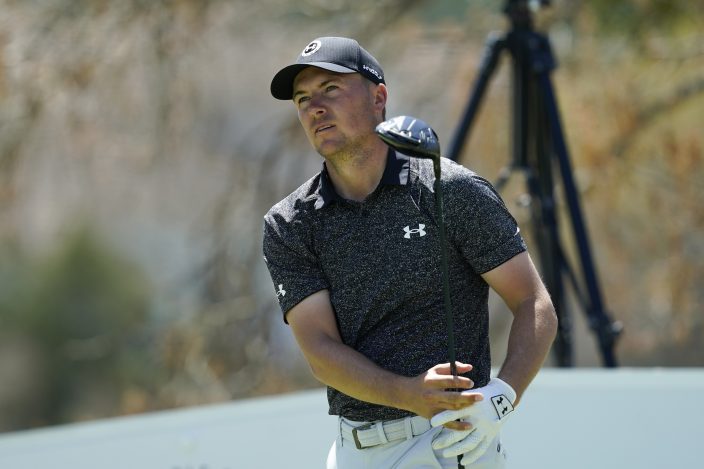 Jordan Spieth watches his hit from the sixth tee during the third round of the Dell Technologies Match Play Championship golf tournament, Friday, March 25, 2022, in Austin, Texas. (AP PhotoTony Gutierrez)

Notes: This is the final year for the LPGA's first major to be played at Mission Hills. Chevron kept the tournament alive by becoming the title sponsor and plans to move it to Houston next year. ... Nelly Korda, the No. 2 player in women’s golf, did not enter the first major of the year as she recovers from a blood clot in her arm. ... Atthaya Thitikul is the sixth player from Thailand to win on the LPGA Tour. She moved to No. 5 in the women's world ranking. ... The leading five players in the world ranking are from five countries. ... The LPGA's first major was co-founded in 1972 by Dinah Shore, and it became a major in 1983. ... Dottie Pepper holds the tournament record at 19-under 269 in 1999. Karrie Webb set the record for largest margin a year later when she won by 10 shots. ... Brittany Lincicome in 2015 is the last American winner of the tournament. She also is the only player to have won it twice in the last 20 years.

Next tournament: Lotte Championship on April 13-16.

Notes: This is the last chance for someone to earn a spot in the Masters by winning. ... Richard Bland, who came one match victory away from getting into the top 50, is in the tournament as a sponsor exemption. ... Jordan Spieth's victory last year was his first since the 2017 British Open at Royal Birkdale. ... Rory McIlroy and Hideki Matsuyama, both of whom chose not to play in the Match Play, are in the field. McIlroy wanted this as a tune-up for the Masters. Matsuyama is recovering from neck and shoulder soreness he first felt at Bay Hill. ... Only 23 players in the field already are eligible for the Masters. That includes Robert MacIntyre of Scotland, who was top 12 at Augusta last year, and Guido Migliozzi of Italy, who qualified by being in the top four at the U.S. Open last year. ... Bryson DeChambeau is playing back-to-back PGA Tour events for the first time since the FedEx Cup playoffs last year.

Notes: The field features three players who will be in the Masters next week — Bernhard Langer, Vijay Singh and Padraig Harrington, who qualified by finishing among the top four last year in the PGA Championship at Kiawah Island. ... Gary Nicklaus, the son of Jack Nicklaus, is playing on a sponsor exemption. ... Steve Stricker is hopeful of returning as early as the ClubCorp Classic in a month. His ultimate target is the first Champions Tour major of the year. ... The defending champion is Kevin Sutherland. This is the 20th anniversary of his only PGA Tour victory in the Match Play. ... Miguel Angel Jimenez has won two of the four tournaments played so far on the schedule. The other winners were Langer and Retief Goosen. ... Langer has finished in the top 10 in all four tournaments this year. ... K.J. Choi has gone 101 holes without a three-putt on the PGA Tour Champions.

Next tournament: ClubCorp Classic on April 22-24.

Strong field assembled for Tampa as Masters gets closer