Germany's health minister has backed off a decision to end compulsory isolation for people who test positive for COVID-19, declaring that it was a mistake and sent the wrong signal.

Health Minister Karl Lauterbach said on Monday that obligatory self-isolation, usually for 10 days — which can be cut to seven days with a negative test — would be scrapped May 1 and replaced with a strong recommendation to isolate for five days. Local health offices would still have ordered infected people in health facilities to stay off work.

Lauterbach, who first announced his change of heart on a television talk show Tuesday night, said Wednesday that the idea “was a mistake I am personally responsible for.” 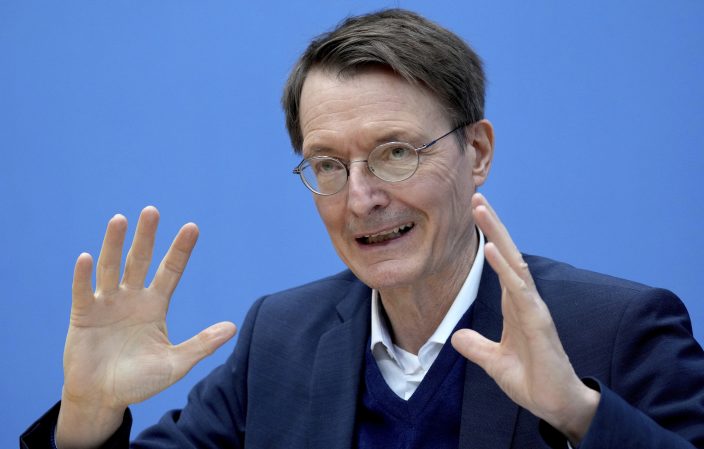 FILE -- German Health Minister Karl Lauterbach speaks during a press conference on the current coronavirus pandemic in Berlin, Germany, Friday, Jan. 14, 2022. Germany's health minister has backed off a decision to end obligatory isolation for people who test positive for COVID-19, declaring that it was a mistake and sent the wrong signal. (AP PhotoMichael Sohn,file)

“I have withdrawn the proposal because the completely wrong impression would have arisen that either the pandemic is over or the virus has become significantly more harmless than was assumed in the past,” he told reporters in Berlin.

He noted that nearly 350 coronavirus-related deaths were recorded on Tuesday, and said Germany has case numbers "that are much too high” and that long COVID is “a big problem.”

Lauterbach said his aim had been to lighten the burden on local health offices and that he will instead do so by lifting a requirement for the contacts of infected people to quarantine. He said he would propose keeping a compulsory five-day isolation period for inviduals with COVID-19 in place.

Infection levels in Germany have been drifting down, and most coronavirus restrictions have recently been relaxed.

Lauterbach, an epidemiologist and longtime lawmaker with Chancellor Olaf Scholz's center-left party, was one of Germany's most prominent voices urging caution and strict measures against the coronavirus in the earlier stages of the pandemic.

Since becoming health minister in December, he has tried to balance that approach with the political challenges of a diverse three-party coalition government and the impact of the omicron variant, which has brought high case numbers but in many cases relatively mild illness.

Speaking on Deutschlandfunk radio, opposition leader Friedrich Merz assailed what he called a “breathless” style of government “with decisions that don't last for 48 hours.”

Merz also criticized the government's approach to a potential vaccination mandate ahead of parliamentary votes set for Thursday. Scholz favors a mandate, but left it to lawmakers to come up with cross-party proposals amid divisions in his own government.

Backers of obligatory vaccinations for adults backed off that idea this week, at least for now, after struggling to build enough support.

They agreed to a compromise that foresees a mandate for people age 60 and over taking effect in October. Parliament could decide this fall whether to extend the requirement to all residents over 18. It's unclear whether that or any other proposal has a chance of winning a majority in parliament.

Some lawmakers in the governing parties oppose any mandate. Merz said his center-right party is sticking to its own proposal, which foresees setting up a national vaccination register but doesn't include an immediate vaccination mandate.