Napoli’s title hopes took a blow on Sunday as it lost 3-2 at home to Fiorentina in Serie A.

Dries Mertens had cancelled out Nicolás González’s opener shortly after coming off the bench. But fellow substitute Jonathan Ikoné also had an immediate impact as he restored Fiorentina’s advantage and Arthur Cabral all but sealed the match.

Victor Osimhen gave Napoli hope but in the end it remained a point behind Serie A leader AC Milan, which visits Torino later. Defending champion Inter Milan is level with Napoli but has a game in hand. 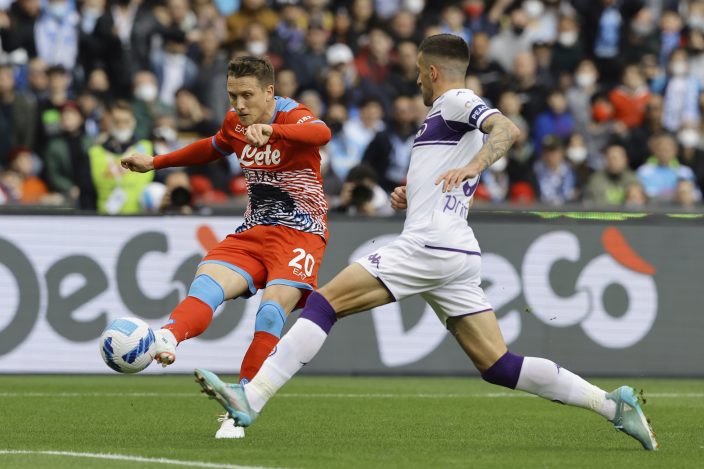 Napoli's Piotr Zielinski kicks the ball during the Italian Serie A soccer match between Napoli and Fiorentina at the Diego Armando Maradona stadium in Naples, Italy, Sunday, April 10, 2022. (Alessandro GarofaloLaPresse via AP)

Napoli was looking to move top of the league, temporarily at least, but it was Fiorentina that took a surprise lead in the 29th minute. A cross from Alfred Duncan was not cleared and González controlled the ball on his chest before firing into the top corner.

Mertens was brought on in the 56th and scored with practically his first touch two minutes later, sweeping the ball into the bottom left corner after Osimhen had raced down the left and pulled back from the byline.

Ikoné took even less time to have an impact, scoring his debut Serie A goal barely a minute after coming off the bench. 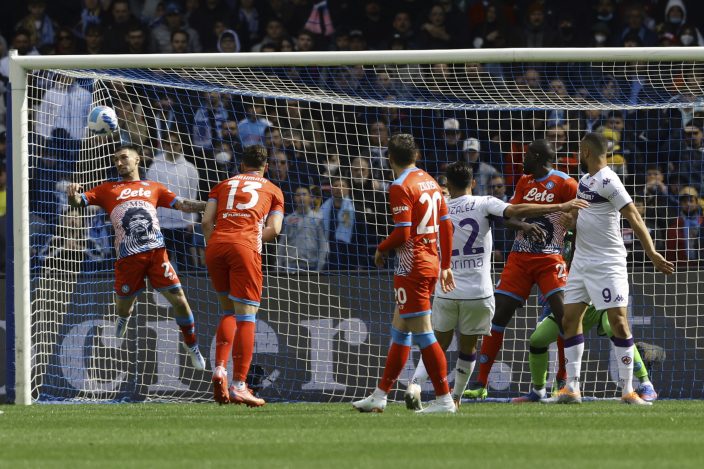 Napoli thought it had equalized again but Hirving Lozano was called offside and instead it was Fiorentina that extended its advantage in the 72nd as Cabral sprinted down the left and cut inside past Stanislav Lobotka before curling into the far corner.

Osimhen set up a frantic finale when he pulled one back six minutes from time, chesting the ball down between two defenders and then shooting powerfully into the top corner. 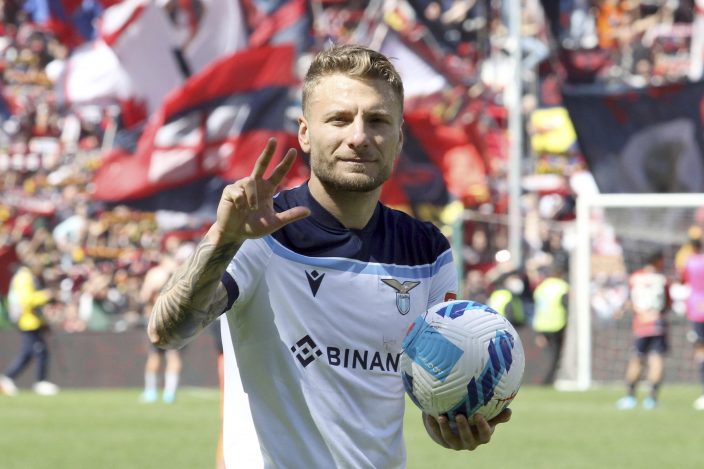 Lazio's Ciro Immobile celebrates his hat trick during the Italian Serie A soccer match between Genoa and Lazio at the Luigi Ferraris stadium in Genoa, Sunday, April 10, 2022. (Tano PecoraroLaPresse via AP)

Ciro Immobile netted a hat trick as Lazio won 4-1 at relegation-threatened Genoa to boost its chances of qualifying for Europe.

Adam Marušić scored Lazio’s opener in the 31st and Immobile doubled the side’s lead on the stroke of halftime before adding two more after the break.

Genoa briefly reduced the deficit with a stroke of luck as a pass ricocheted off Patric and the underside of the bar for an own goal from the Lazio defender. 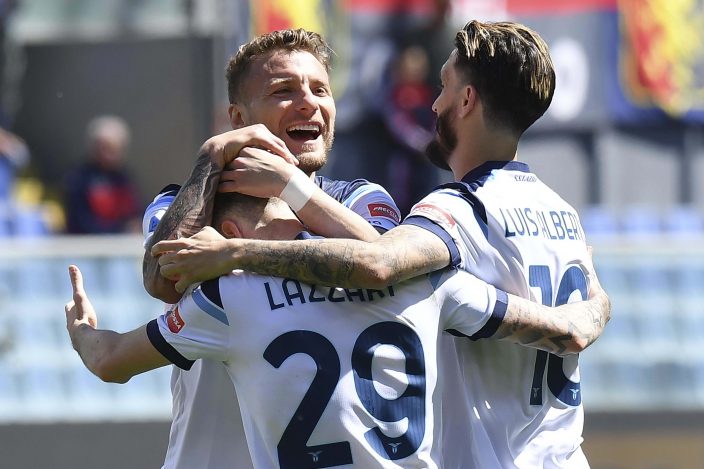 Lazio's Ciro Immobile, center, celebrates with teammates after scoring his side's second goal during the Italian Serie A soccer match between Genoa and Lazio at the Luigi Ferraris stadium in Genoa, Sunday, April 10, 2022. (Tano PecoraroLaPresse via AP)

Lazio moved fifth, a point above Roma, which hosts bottom club Salernitana later. Fiorentina is two points behind Lazio and two points above Atalanta, which lost 2-1 at Sassuolo following a double from Hamed Traorè.

Genoa remained three points from safety. It is level on points with Venezia, which lost 2-1 at home to Udinese.