French President Emmanuel Macron may be ahead in the presidential race so far, but he warned his supporters that “nothing is done” and his runoff battle with far-right challenger Marine Le Pen will be a hard fight. And she's ready for it.

The duel is starting Monday, after the two came out on top in Sunday's first-round vote. The centrist Macron is heading to an economically depressed area of northern France where a majority of voters chose Le Pen, close to her electoral stronghold of Henin-Beaumont.

Meanwhile, Le Pen’s National Rally officials will meet Monday to plan strategy for the second round, scheduled on April 24. Le Pen summed up the standoff by saying voters are faced with “a fundamental choice between two opposing visions of the future." 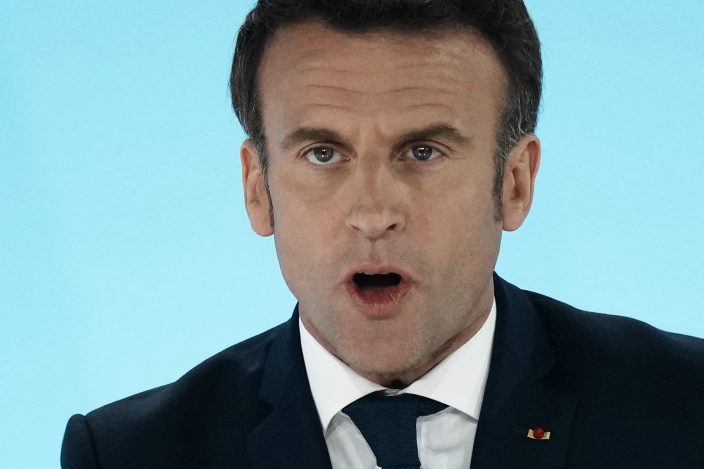 Current French President and centrist presidential candidate for reelection Emmanuel Macron speaks at his election night headquarters Sunday, April 10, 2022 in Paris. French polling agencies projected Sunday that incumbent Emmanuel Macron and far-right nationalist Marine Le Pen are heading for another winner-takes-all runoff in the French presidential election, with their fierce political rivalry and sharply opposing visions pulling clear of a crowded field of 12 candidates in the first round of voting. (AP PhotoThibault Camus)

Macron already faced Le Pen in the presidential runoff five years ago. But all opinion polls show the leader of the National Rally is much closer this time to a potential win.

Macron said he wants to convince those who voted for the “extremes” or stayed at home that “our project responds much more seriously to their fears and to the challenges of the time.”

On her third attempt to become France’s first woman president, Le Pen was rewarded Sunday for her years-long effort to rebrand herself as more pragmatic and less extreme. Macron has accused Le Pen of pushing a dangerous manifesto of racist, ruinous policies. Le Pen wants to roll back some rights for Muslims, banning them from wearing headscarves in public, and to drastically reduce immigration from outside Europe. 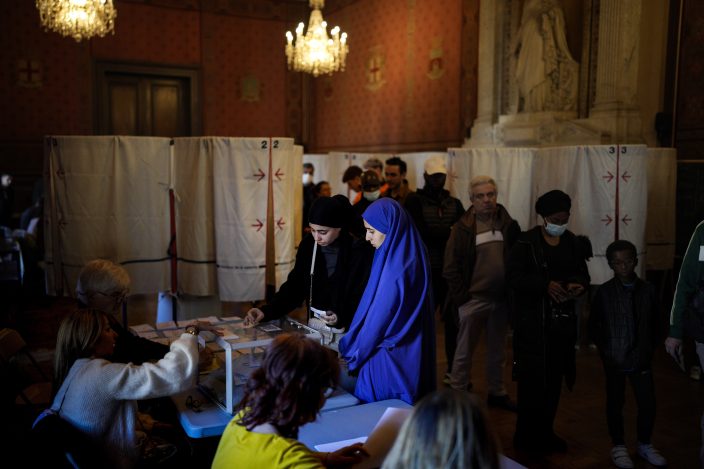 Voters casts their ballots for the first round of the presidential election in Marseille, southern France, Sunday, April 10, 2022. Up to 48 million French voters headed to polling stations nationwide Sunday for the first round of the country's presidential election, one that seemed for months like a shoo-in for French President Emmanuel Macron but is now a tossup amid a strong challenge from the far right's Marine Le Pen. (AP PhotoDaniel Cole)

In his speech on Sunday evening, Macron said his project would protect all religions and the freedom “to believe, or not."

The rise of food and energy prices is at the core of Le Pen’s campaign, but Macron’s team argue she wouldn’t have the financial means to meet her promises.

“Our focus is now on the project and the values,” Senator Francois Patriat, a member of Macron’s party, said. The strategy consists in being “proud” of what has been done over the past five years, showing “a bit of humility,” and “above all, some fighting spirit,” he said. 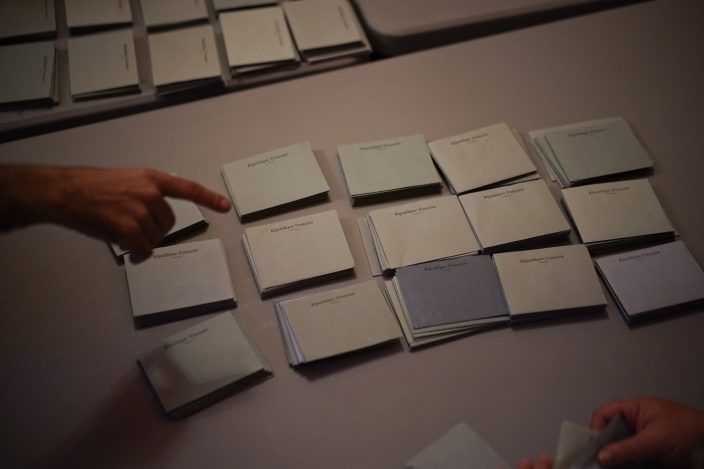 Ballots are being counted for the first round of the presidential election in Marseille, southern France, Sunday, April 10, 2022. Up to 48 million French voters headed to polling stations nationwide Sunday for the first round of the country's presidential election, one that seemed for months like a shoo-in for French President Emmanuel Macron but is now a tossup amid a strong challenge from the far right's Marine Le Pen. (AP PhotoDaniel Cole)

Macron will use the next days to “go in the field,” he said. Visits to several French regions have been scheduled this week. Prior to Sunday’s first round, Macron was absent from most of the electoral campaign as he spent most of his time focusing on diplomatic efforts over the war in Ukraine.

Le Pen's camp, meanwhile, is hoping to capitalize on anger at Macron over policies seen as favoring the rich.

“Now everything is possible,” Aurélien Lopez Liguori, a municipal councilor with Le Pen's party in the southern city of Sete, told The AP. Compared with 2017, “now Macron has a record, a bad record.” He credited Le Pen's proximity to the French during the campaign for closing the gap with Macron.

French Minister for European Affairs Clément Beaune told the AP “we should not think that it’s done.”

The battle will go “project against project,” he said.

Noting Macron’s “pro-European” project, Beaune recalled that five years ago “Le Pen was proposing — must not forget it — to leave the euro (area), to break Europe when Brexit and Frexit were trendy.”

Le Pen has dropped earlier threats to pull France out of the EU and abandon the euro if elected, but some of her proposals, including setting up a national border control, are contrary to EU rules.

Macron and Le Pen are to debate on national television next week.

With most votes from the 12-candidate first round counted by Monday morning, Macron had more than 27% and Le Pen had 23%. Hard-left leader Jean-Luc Melenchon was third with close to 22%.

Macron improved on his first-round showing in 2017, despite his presidency being rocked by the yellow vest protest movement over perceived economic injustice, the pandemic and Russia’s war in Ukraine.

The election outcome will have wide international influence as Europe struggles to contain the havoc wreaked by that war. Macron has strongly backed European Union sanctions on Russia while Le Pen has worried about their impact on French living standards. Macron also is a firm supporter of NATO and of close collaboration among the EU 27 members.

Follow all AP stories on France’s presidential election at https://apnews.com/hub/french-election-2022

In France, a nail-biting election as Macron's rival surges