North Korea is destroying a South Korean-owned golf course at a scenic mountain resort in the second confirmed case of South Korean assets being eliminated in an area where the rivals once ran a joint tour program, officials said Tuesday in Seoul.

North Korea’s demolition of South Korean-built facilities at its Diamond Mountain resort comes as ties between the countries remain strained over the North’s recent series of high-profile missile tests.

Responding to queries by The Associated Press, Seoul’s Unification Ministry said it has confirmed North Korea is demolishing the golf resort in addition to a South Korean-owned hotel there. Last Friday, the ministry said North Korea was dismantling the Haegumgang Hotel, a floating hotel docked at a coastal area in the resort. 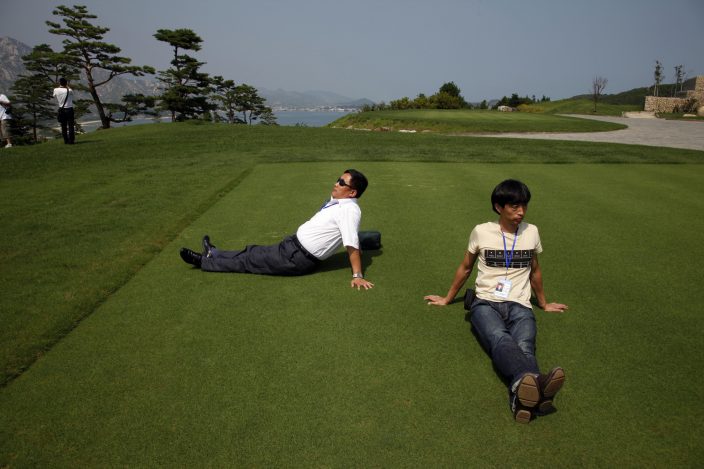 FILE - Visitors enjoy the manicured lawn at the South Korean-owned golf course at the Mount Kumgang resort, also known as Diamond Mountain, in North Korea on Sept. 1, 2011. North Korea is destroying the golf course in the second confirmed case of South Korean assets being eliminated in an area where the rivals once ran a joint tour program, officials said Tuesday, April 12, 2022, in Seoul. (AP PhotoNg Han Guan, File)

The ministry said it strongly urges North Korea to stop destroying the South Korean facilities. It demanded North Korea return to talks to address the issue.

The two Koreas jointly ran a tour project at the resort for about 10 years during an earlier era of inter-Korean detente. The tours drew an estimated 2 million South Korean visitors and served as a rare source of foreign currency for the impoverished North. But South Korea suspended the project in 2008 after one of its tourists was fatally shot by a North Korean soldier there.

After their relations improved in 2018, the two Koreas pushed to resume stalled cooperation projects including the mountain tours. But Seoul eventually failed to do so without defying U.S.-led sanctions that kept the tours from restarting. In 2019, North Korean leader Kim Jong Un ordered officials to tear down South Korean-owned assets in the resort, but the demolition was delayed due to worries about the spread of the coronavirus.

North Korea has sought sanctions relief and other concessions from the United States and South Korea to revive its moribund economy. Some experts say its recent weapons testing activity was meant to perfect its missile technology and boost its leverage in future negotiations with its rivals.

Besides the golf resort and floating hotel, South Korea owns other accommodation facilities in the resort such as spas, a culture center, karaoke rooms and a building used for reunions of Korean families separated by war. The fate of those facilities was unclear.

The North’s state media reported Tuesday that a fire in the Diamond Mountain area over the weekend destroyed unspecified facilities and hundreds of hectares of forests. It said the blaze was put out on Sunday.