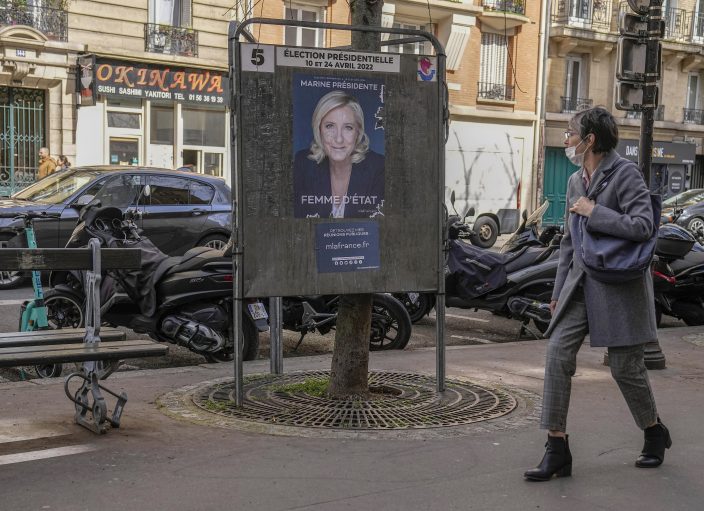 A woman look to a presidential campaign poster of far-right presidential candidate Marine Le Pen in Paris, Monday, April 11, 2022. French President Emmanuel Macron may be ahead in the presidential race so far, but he warned his supporters that "nothing is done" and his runoff battle with far-right challenger Marine Le Pen will be a hard fight. (AP PhotoMichel Euler)

RUSSIA-UKRAINE WAR-BUCHA’S CHILDREN — Bucha witnessed some of the ghastliest scenes of Russia’s invasion, and almost no children have been seen in its silent streets. But beside an apartment building spray-painted “CHILDREN,” Bucha’s fragile renewal can be seen. A small group of neighborhood children have gathered here, finding distraction from the war. A wooden box once used for ammunition now holds a teddy bear and other toys. A father says that “it’s hard to explain for the smaller ones that war is still going on.” By Cara Anna. SENT: 860 words, photos.

RUSSIA-UKRAINE-WAR — Corpses are now “carpeted through the streets” of Mariupol after Russian troops killed more than 10,000 civilians over the past six weeks in their unsuccessful fight to capture the strategic southern port, the mayor said, while Western powers warned of an ongoing buildup for a suspected Russian assault in Ukraine’s east. The British Ministry of Defense said Russian forces are continuing to pull out of Belarus to support operations in eastern Ukraine, focused on the Donbas region, where Russian-allied separatists have claimed independence. By Yuras Karmanau, Adam Schreck and Cara Anna. SENT: 1,080 words, photos, videos. With RUSSIA-UKRAINE-WAR-THE-LATEST.

Current French President and centrist presidential candidate for reelection Emmanuel Macron poses with workers as he visits a building site for Log's company in Denain, northern France, Monday, April 11, 2022 . French President Emmanuel Macron declared Monday that he wants to "convince" a broad range of French voters to back his centrist vision, kicking off a two-week battle against far-right challenger Marine Le Pen ahead of the country's presidential runoff vote. (AP PhotoLewis Joly, Pool)

RUSSIA-UKRAINE-WAR-FERTILIZER CRUNCH — Russia is a huge exporter of fertilizer that farmers worldwide need to cultivate their crops. As the war in Ukraine has endangered supplies and raised prices for both fertilizer and energy, the crunch is affecting farmers’ ability to do their job. That could lead to rising prices throughout the food chain, lower crop yields and even food shortages worldwide. By Geoffrey Kaviti, Chinedu Asadu and Paul Wiseman. SENT: 1,240 words, photos, video. Also see MORE ON RUSSIA-UKRAINE WAR below. For full coverage.

FRANCE ELECTION EUROPE — A win for far-right candidate Marine Le Pen in France’s presidential election would have immense repercussions on the European Union, threatening its democratic values and commercial rules — and the EU’s united front against Russia’s war in Ukraine. Her rival Emmanuel Macron hopes to prevent that and woo voters at his pro-EU vision rally. By Sylvie Corbet, Samuel Petrequin and Raf Casert. UPCOMING: 870 words, photos by 4 a.m.

CONSUMER PRICES — With ever-rising costs for food, gasoline, housing and other necessities squeezing consumers and threatening the economy, inflation in the United States likely set yet another four-decade high in March. By Economics Writer Paul Wiseman. SENT: 730 words, photo. UPCOMING: 130 words after release of report at 8:30 a.m., then updated.

RUSSIA-UKRAINE WAR-SHOOTING TRAINING — After Russia launched the brutal attack against Ukraine, Ukrainians from all parts of the Czech Republic keep arriving in the second largest Czech city of Brno attracted by the courses designed to teach them skills to safely handle lethal rifles while being able to inflict damage on their enemy. UPCOMING: 700 words, photos by 5 a.m.

VIRUS OUTBREAK-CHINA — The U.S. has ordered non-emergency government staff to leave Shanghai, which is under a tight lockdown to contain a COVID-19 surge. SENT: 500 words, photos.

VIRUS-OUTBREAK-UN-GLOBAL VACCINATIONS — The U.N. official spearheading global vaccination efforts against the coronavirus said the number of countries where 10% or less of the population has been vaccinated dropped from 34 to 18 since January and called for accelerated progress to end the pandemic. SENT: 610 words.

MEDIA-RACHEL MADDOW — Rachel Maddow returns to MSNBC, will switch to once a week. SENT: 320 words, photo.

ELECTION 2022-ZUCKERBERG — Donations Zuckerberg money won’t be in next round of aid for elections. SENT: 720 words, photo.

TRANSGENDER LAWS-EXPLAINER — Alabama has become the first state to criminalize the use of puberty blockers and hormones to treat transgender people under age 19. AP explains what critics call the “Don’t Say Gay” law. SENT: 670 words, photo.

STATE OF BLACK AMERICA — The National Urban League released its annual report on the State of Black America, and its findings are grim. SENT: 600 words, photos.

KOREAS-TENSIONS — North Korea is destroying a South Korean-owned golf course at a scenic mountain resort in the second confirmed case of South Korean assets being eliminated in an area where the rivals once ran a joint tour program, officials said in Seoul. SENT: 460 words, photos.

JAPAN-HONDA — Honda is investing $40 billion over the next decade in research, especially to realize a major shift to ecological electric vehicles, the Japanese automaker said. By Business Writer Yuri Kageyama. SENT: 380 words, photos.