If history is any indication, perhaps the Internet sleuths who track flight patterns should circle May 10 on the calendar and look for a private jet going from South Florida to Tulsa, Oklahoma. That would be the next chance for Tiger Woods to play.

And he didn’t sound all that promising when he left the Masters.

Woods has been consistent since he first spoke publicly in the Bahamas last December that he is done playing a full schedule because of his damaged right leg from his car crash 14 months ago, to go along with five surgeries on his lower back. 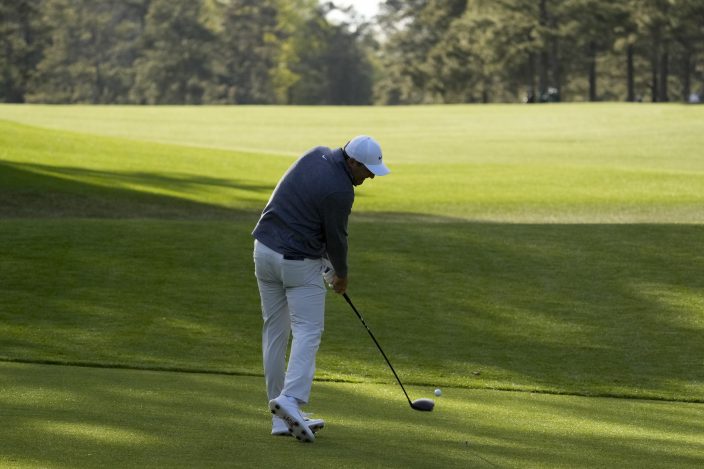 Scottie Scheffler tees off on the 15th hole during the third round at the Masters golf tournament on Saturday, April 9, 2022, in Augusta, Ga. (AP PhotoCharlie Riedel)

“I won’t be playing a full schedule ever again,” he told Sky Sports on Sunday after closing with a 78 for his highest score ever at the Masters. “It will be just the big events. I don’t know if I’ll play Southern Hills or not.”

Most recently would be his fourth PGA Championship title in 2007. This will be the first major since then at Southern Hills. 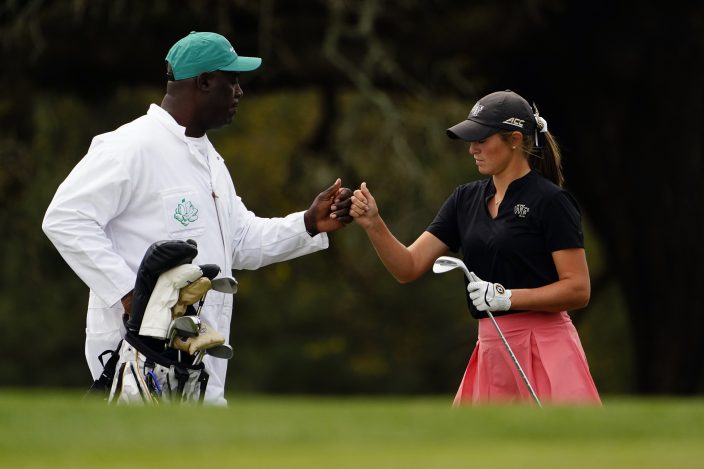 Rachel Kuehn, right, reacts after a chip on the 18th hole during the final round of the Augusta National Women's Amateur golf tournament, Saturday, April 2, 2022, in Augusta, Ga. (AP PhotoMatt Slocum)

May 10 is a date to observe because it’s the Tuesday before PGA Championship week. It was Tuesday before the Masters that Woods ignited hopes with a scouting trip to Augusta National, not so much to see the course but to test his right leg. He played, made the cut for the 22nd straight time, and made it through four days of the toughest walk in golf.

“I will try, there’s no doubt. Like this week, I will try to get ready for Southern Hills, and we’ll see what this body is able to do,” he said.

Curiously missing from the prospects was the U.S. Open on June 16-19 at The Country Club outside Boston, perhaps because he’s only looking at the next possibility. He made it clear he would be at St. Andrews, where he won in 2000 and 2005, and described it as “my favorite golf course in the world.” 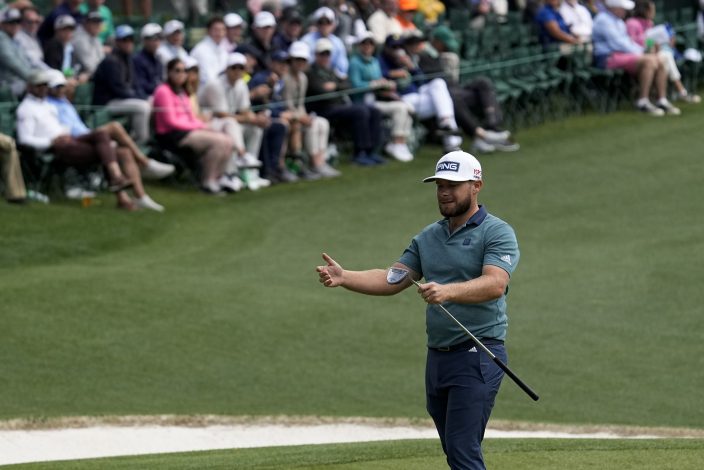 Tyrrell Hatton, of England, reacts to a missed putt on the 16th hole during the second round at the Masters golf tournament on Friday, April 8, 2022, in Augusta, Ga. (AP PhotoRobert F. Bukaty)

“I will be there for that one,” he said.

Otherwise, stay tuned. He is a five-time winner at the Memorial, but it would seem unlikely to play another big course (uphill walks from every green to tee) that falls two weeks after the PGA Championship and two weeks before the U.S. Open.

"I GOT IT ALL WRONG"

Before the television shot of Rory McIlroy holing out from the bunker on the 18th at the Masters, every viewer knew how it would turn out unless the audio was on mute.

CBS analyst and three-time Masters champion Nick Faldo ruined it for them.

“I don’t want to spoil it, but something incredible has just happened,” Faldo said from the booth as the cameras were still showing Scottie Scheffler and Cameron Smith on the 12th.

Faldo went on “The Dan Patrick Show” on Tuesday and tried to own it.

“I got caught up on that for a split second and I reacted. And so you’re right, I got it all wrong for a split second,” Faldo said. “I seriously was shaking because I thought, ‘Rory is going to win.’ He pulls off an impossible shot, and his reaction, and I’m sitting right in the middle of it.

Gary Woodland in the second round and Charl Schwartzel in the third round each holed out from the fairway to make eagle on No. 10, which had never had more than one eagle in the same tournament.

The 15th tee was moved back 20 yards and lowered, leaving a slightly uphill tee shot. Compounding matters at this Masters, the wind was west and northwest, into the players' faces, adding to the length and to the decisions.

Dustin Johnson had a 7-wood into the green on Friday and instead chose to lay up. Players who did get favorable conditions — mainly the wind dying — never got it close enough for a good look at eagle. With less wind on Sunday, Scottie Scheffler went just over the back with a 5-iron.

Mostly it was about the wind, especially when it was in and off the left.

“It's so hard to hit it up that right side and commit. So it’s made it a tougher tee shot,” Rory McIlroy said. “You’re more likely to be blocked out by those trees on the left just because of the camber of the fairway. Then there’s no decision to be made there. You can’t go for the green.”

There has been far more feast than famine for Carl Yuan, and now the 25-year-old from China is assured of a PGA Tour card next season.

Yuan became the first player to cross 900 points on the Korn Ferry Tour, which officials have deemed safe for players to be among the top 25 on the points list to graduate to the big leagues. It only took Yuan seven starts to get there, and he missed the cut in three of them.

And now he waits. Unless he were to win two more times, Yuan has 15 tournaments remaining in the regular season.

The U.S. team for the Curtis Cup is half set.

Rose Zhang earned a spot as the No. 1 player in the women’s amateur ranking at the end of 2021. Jensen Castle earned her place on the eight-member team as the U.S. Women’s Amateur champion. Rachel Heck (No. 3) and Rachel Kuehn (No. 8) got onto the team last week as being among the top 10 in the world at the April 6 deadline.

The USGA International Team Selection group will pick the other four players. The Curtis Cup is June 10-12 at Merion.

CBS said the final round of the Masters averaged 10.17 million viewers, up 7% from a year ago and the most of any network for a golf telecast since Tiger Woods won 2019 Masters. ... The U.S. Women’s Open received a record 1,874 entries for Pine Needles. That breaks by one entry the previous mark in 2015 when the Women’s Open was at Lancaster Country Club in Pennsylvania. The purse for the June 2-5 championship is $10 million. ... The Australian PGA is at Royal Queensland in late November will be co-sanctioned with the European tour for the first time since 2019. ... Chevron donated more than $2 million last week to its chosen charities focusing on supporting and championing women in sports, the workplace and society. Chevron is the new title sponsor of the LPGA Tour's first major of the year. ... Scottie Scheffler has four wins this year. The last player to have four PGA Tour victories through the Masters was David Duval (Kapalua, Bob Hope Classic, Players Championship and Atlanta).

The last three Masters champions have led by at least three shots going into the final round.

“Maybe I’ll be better off if I come back being a caddie here rather than trying to hit golf shots.” — Tyrrell Hatton, after a 79-80 weekend at the Masters to finish last. He has shot in the 60s one time in his 20 rounds at Augusta National.