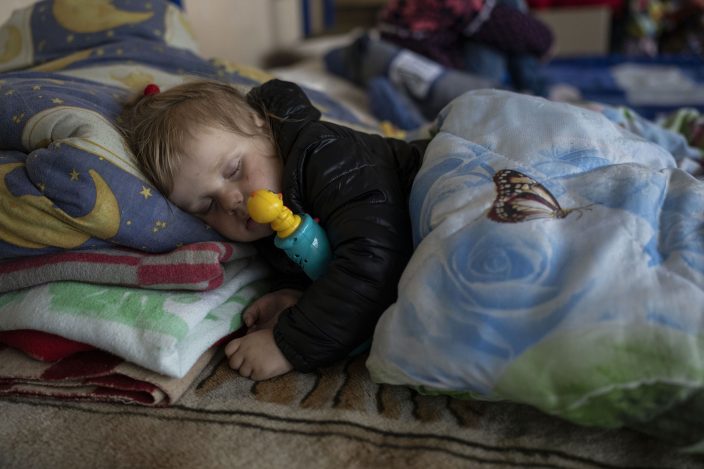 3 year-old Carolina Fedorova sleeps inside a school that is being used as a shelter for people who fled the war, in Dnipro city, Ukraine on Tuesday, April 12, 2022. Carolina fled with her parents and four siblings from the city of Bahmud. (AP PhotoPetros Giannakouris)

SUBWAY SHOOTING — Police hunted late into the night for the gunman who opened fire on a subway train in Brooklyn, an attack that left 10 people wounded by gunfire and once again interrupted New York City’s long journey to post-pandemic normalcy. The search focused partly on a man who police say rented a van possibly connected to the violence. Investigators stressed they weren’t sure whether the man, Frank R. James, was responsible for the shooting. But authorities were examining social media videos in which the 62-year-old decried the United States as a racist place awash in violence and sometimes railed against the city’s mayor, Eric Adams. By Jennifer Peltz, Michael R. Sisak and Michael Balsamo. SENT: 550 words, photos, videos. With SUBWAY SHOOTING-ANXIETY — Anxieties resurface as gunfire erupts on NYC subway. 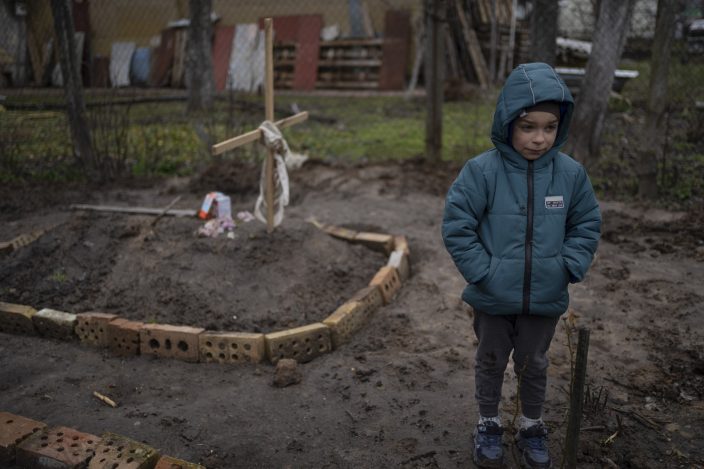 In the courtyard of their house, Vlad Tanyuk, 6, stands near the grave of his mother Maryna Tanyuk, who died because of starvation and stress due to the war, on the outskirts of Kyiv, Ukraine, Monday, April 4, 2022. (AP PhotoRodrigo Abd)

VIRUS OUTBREAK-1 MILLION — The first death occurred in February, and by April, New York City was in the throes of a full-blown crisis. From there, the round-number milestones kept piling up, each one marking an incredible amount of suffering wrought by the pandemic. Now, the death toll is about to hit 1 million. By Adam Geller and Carla K. Johnson. SENT: 2,410 words, photos, video. An abridged version of 990 words is also available. With VIRUS OUTBREAK-EMPTY SPACES-PHOTO ESSAY — Echoes of one million lost in the spaces they left behind.

RUSSIA-UKRAINE-WAR — Russia vowed to continue its bloody offensive in Ukraine as the war neared its seventh week, as President Vladimir Putin insisted the campaign was going as planned despite a major withdrawal and significant losses. Thwarted in their push toward the capital, Kyiv, Russian troops focused on the eastern region of Donbas, where Ukraine said it was investigating a claim that a poisonous substance had been dropped on its troops. It was not clear what the substance might be, but Western officials warned that any use of chemical weapons by Russia would be a serious escalation of the already devastating war. By Yuras Karmanau and Adam Schreck. SENT: 1,290 words, photos, videos. With RUSSIA-UKRAINE-WAR-THE LATEST.

RUSSIA-UKRAINE WAR-HOME TO IRPIN — Heartened by Russia’s withdrawal from Ukraine’s capital region, residents of the town of Irpin have started coming home, at least to what’s left. The pounding sounds from a sixth-floor window and the risk of falling glass are not destruction, but rebuilding. Irpin saw desperate scenes of flight just weeks ago. The early returnees are among the 7 million Ukrainians displaced inside their country by the war. By Cara Anna. SENT: 660 words, photos. Also see MORE ON RUSSIA-UKRAINE WAR below. For full coverage.

RUSSIA-UKRAINE-WAR-BIDEN — President Joe Biden says Russia’s war in Ukraine amounts to “genocide,” accusing President Vladimir Putin of trying to “wipe out the idea of even being a Ukrainian.” SENT: 410 words, photos, video.

RUSSIA-UKRAINE-WAR-JAPAN — As millions of Ukrainians fled their country, a longtime Tokyo resident did the opposite. Sasha Kaverina left her life in Japan and rushed to Ukraine to rescue her parents after a Russian missile hit their apartment building. SENT: 890 words, photos, video.

ELECTION 2022-WISCONSIN-BALLOT BOXES — Wisconsin’s Supreme Court was scheduled to hear arguments in a case that will likely determine how extensively absentee ballot drop boxes can be used in the upcoming midterm election where the battleground state’s Democratic governor and Republican U.S. senator are on the ballot. SENT: 520 words, photos. UPCOMING: Arguments scheduled for 9:30 a.m.

CAPITOL RIOT-TRUMP DEFENSE — Mentions of Donald Trump have been rare at the first few trials for people charged with storming the U.S. Capitol, but the latest defendant to go on trial is blaming his actions on the former president and his false claims about a stolen election. SENT: 980 words, photo.

NATIONAL ARCHIVES-TRUMP — The Justice Department rejected a request this week from the House Oversight Committee to provide details on the content of the 15 boxes of White House records that Trump took to Mar-a-Lago after leaving office. SENT: 500 words, photo.

NEW ZEALAND-CHINA-EXTRADITION — New Zealand’s top court ruled a man can be extradited to China to face a murder charge — a landmark judgment that goes against the trend set by most democratic nations. SENT: 660 words.

HONG KONG — Hong Kong’s former No. 2 official John Lee said he had formally registered his candidacy in the election for the top job after securing 786 nominations to enter the race. SENT: 440 words, photos.

PHILIPPINES-LANDSLIDES — As search and rescue efforts increased with the arrival of equipment, the death toll has risen to at least 56, with 28 others missing, after a summer tropical depression that unleashed days of pounding rain caused landslides and floods in the central and southern Philippines, officials said. SENT: 330 words, photos.