Defending champion Inter Milan moved to the top of Serie A after a comfortable 3-1 win at Spezia on Friday.

Substitute Lautaro Martínez returned from suspension in the second half to seemingly seal the win after Marcelo Brozović opened the scoring.

However, Spezia captain Giulio Maggiore set up a nervy finale when he halved the deficit with a fine strike into the top left corner in the 88th minute, but Alexis Sánchez secured the result in stoppage time. 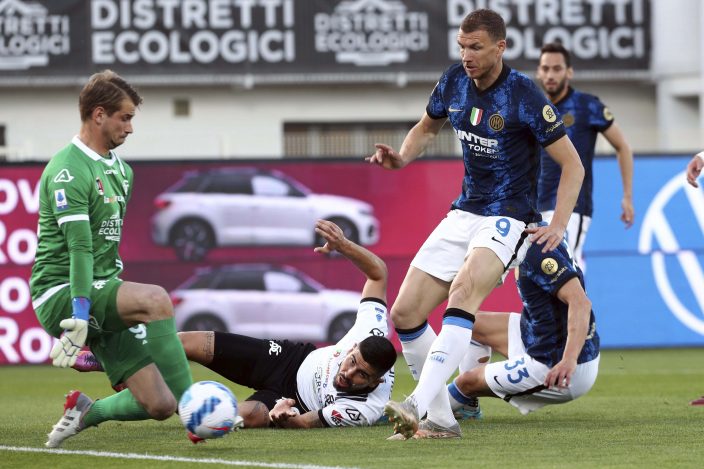 Spezia's goalkeeper Ivan Provedel, left, and Inter's Edin Dzeko battle for the ball during the Italian Serie A soccer match between Calcio Spezia and Inter Milan at the Alberto Picco Stadium in Spezia, Italy, Friday, April 15, 2022. (Tano PecoraroLaPresse via AP)

Inter also hosts Milan in the second leg of the Italian Cup semifinals on Tuesday.

The Nerazzurri struggled to get going on a balmy day in Spezia and almost conceded early but Inter goalkeeper Samir Handanović rushed off his line and grabbed the ball following a wayward interception from teammate Ivan Perišić. 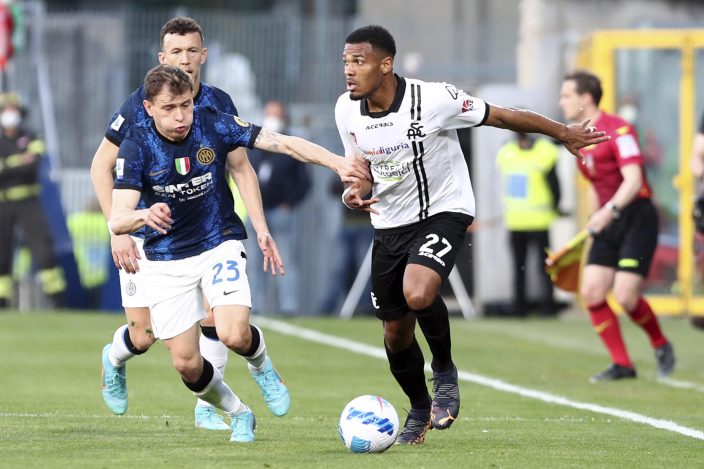 Spezia's Kelvin Amian, right, and Inter's Nicolo Barella battle for the ball during the Italian Serie A soccer match between Calcio Spezia and Inter Milan at the Alberto Picco Stadium in Spezia, Italy, Friday, April 15, 2022. (Tano PecoraroLaPresse via AP)

Inter broke the deadlock in the 31st with its first shot on goal. Brozović started and finished the move as he chipped a pass into the area to Danilo D’Ambrosio, who nodded it back for the Croatia midfielder to drive into the top left corner.

Martínez, who miss last weekend’s win over Hellas Verona due to suspension, came off the bench on the hour mark and doubled his side’s lead 13 minutes later.

Perišić ran onto a cross-field pass to the left flank and cut inside before whipping in a low cross which Martínez flicked into the far corner with his back to goal.

Spezia strove to find the equalizer after Maggiore's goal but Inter sealed the match with almost the last kick of the game. The referee waved play on after a foul on Sánchez and the Inter forward got back up to fire a Martínez assist into the bottom left corner.

There was a somewhat bizarre incident involving Spezia forward M’Bala Nzola. He came on in the 60th but the referee spotted his large earring and ordered him to remove it. Nzola spent several minutes fiddling with it on the touchline, aided by Spezia staff, but couldn’t remove it and had to be substituted, 10 minutes after coming onto the field.