It's Part 2 of the Manchester City-Liverpool doubleheader and this time it's in the FA Cup semifinals. The top teams in the country meet again at Wembley Stadium, a week after drawing 2-2 in a richly entertaining Premier League game that left the title race delicately poised. This time, the result will be definitive — either Liverpool's ambitions of a quadruple of trophies will be extinguished or City's hopes of a treble of trophies will be over. Both teams come into the game having just qualified for the Champions League semifinals, while Liverpool has already won the League Cup. In the Premier League, it's another big day in the top-four race with fourth-placed Tottenham hosting Brighton, fifth-placed Arsenal at Southampton and seventh-placed Manchester United at home to Norwich. The three rivals are separated by six points. 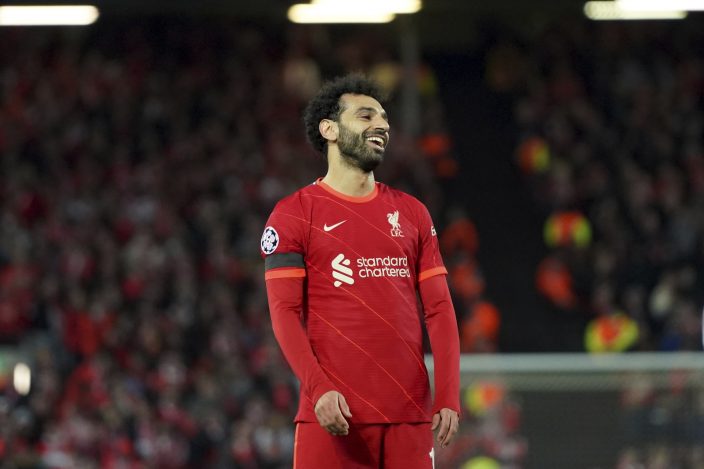 Villarreal and Valencia can move closer to the final European places in the Spanish league with victories. Villarreal, sitting in seventh place, visits Getafe, while ninth-placed Valencia hosts Osasuna. Granada tries to move further away from the relegation zone when it hosts second-to-last Levante, while last-placed Alavés plays at home against Rayo Vallecano. Sitting just outside the relegation zone, Mallorca visits Elche, which is four points clear of demotion.

Juventus will be looking to consolidate fourth place in Serie A when it hosts Bologna, which appears to be giving extra for ailing coach Siniša Mihajlović. Juventus has a four-point advantage over Roma, which plays Napoli on Monday. Mihajlović remains in hospital for treatment after the return of his leukaemia. He is in regular contact with the team via video link and Bologna has managed a draw against Serie A leader AC Milan and victory over Sampdoria in his absence. Lazio and Fiorentina are chasing European places and host Torino and Venezia respectively. Sampdoria needs a win against bottom club Salernitana to move away from the relegation zone. Cagliari is only three points clear and welcomes Sassuolo. Empoli visits Udinese, with both teams all but mathematically safe.

Borussia Mönchengladbach has revenge in mind when it hosts local rival Cologne after losing their previous Rhine derby 4-1 this season. Gladbach was supposed to be pushing for European qualification but instead it’s Cologne that has taken on that challenge. Gladbach, meanwhile is showing signs of improvement after a lackluster season and is unbeaten in its last four games. Relegation-threatened Hertha Berlin is looking for a reaction at Augsburg after losing the derby to Union Berlin 4-1 last weekend. Hertha is second from bottom and faces a series of must-win games against relegation rivals Augsburg, Stuttgart and Arminia Bielefeld. Stuttgart, which is a point above Hertha, visits mid-table Mainz. Second-placed Borussia Dortmund hosts Wolfsburg, which hasn’t scored on its last five visits to the Westfalenstadion. Dortmund, which is nine points behind Bayern Munich with only a mathematical chance of the title, has a host of players out injured. Also, fifth-placed Freiburg hosts mid-table Bochum.

Defending champion Lille hosts Lens with the northern rivals only one point apart. Lille is seventh and Lens is eighth. They are only in outside contention for fourth and automatic entry into the Europa League. Saint-Etienne has lost its last two games and leaked 10 goals doing so, having conceded only one goal in the three games before that. So Pascal Dupraz’s defense needs shoring up because his side needs a home win against Brest to move out of relegation trouble and into 17th place. Victory for Brest would move it up to 11th.