A spectacular overhead kick from Álvaro Morata led to a stoppage-time equalizer for Juventus to draw with nine-man Bologna 1-1 in Serie A on Saturday.

Morata’s acrobatic effort was going wide until Dušan Vlahović met it with a header at the far post that found the target to salvage a point for the Bianconeri. They'd been denied a penalty in a disputed VAR decision moments earlier. 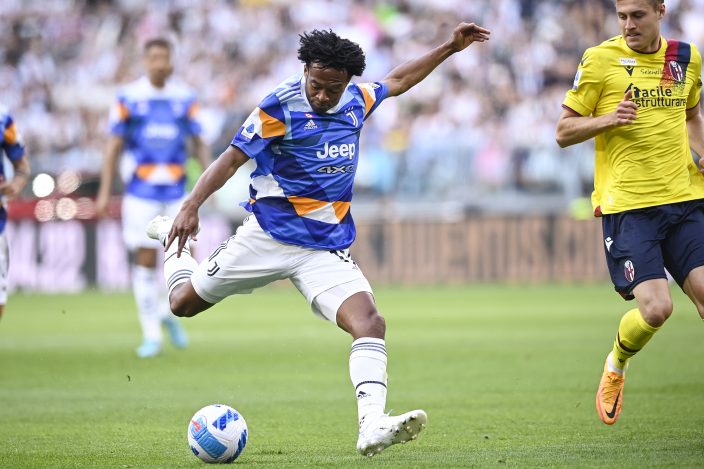 Juventus' Juan Cuadrado kicks the ball during the Serie A soccer match between Juventus and Bologna, at the Turin Allianz stadium, Italy, Saturday, April 16, 2022. (Fabio FerrariLaPresse via AP)

Marko Arnautović put Bologna ahead after the break by running onto a through ball from Roberto Soriano and rounding the goalkeeper to deposit the ball into an empty net.

Bologna's last six goals have all been by Arnautović, who has 12 this season.

They are playing for ailing coach Siniša Mihajlović, who is hospitalized while being treated for the return of his leukemia. 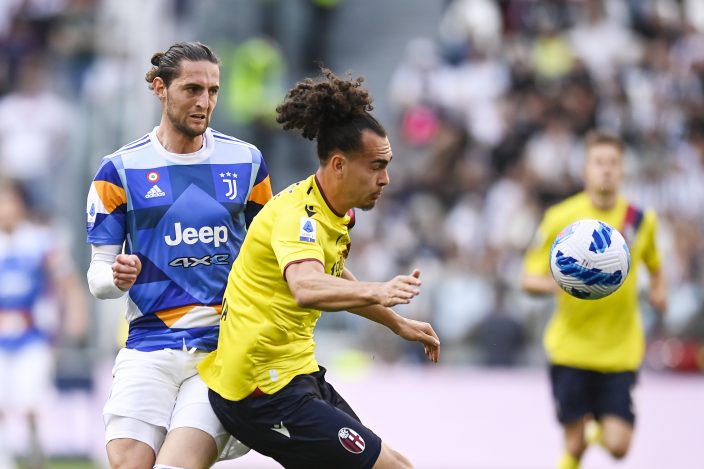 Morata thought he earned Juventus a late penalty when he appeared to be fouled inside the area by Adama Soumaoro but no penalty was awarded after a VAR review believed the foul occured outside the area. Soumaoro was issued a red card after the review for dissent. In the ensuing protests by Bologna, Gary Medel was also sent off — leaving the visitors with nine men.

Vlahović then notched his 22nd goal this season, having joined from Fiorentina in January, and the 50th of his career in Serie A. 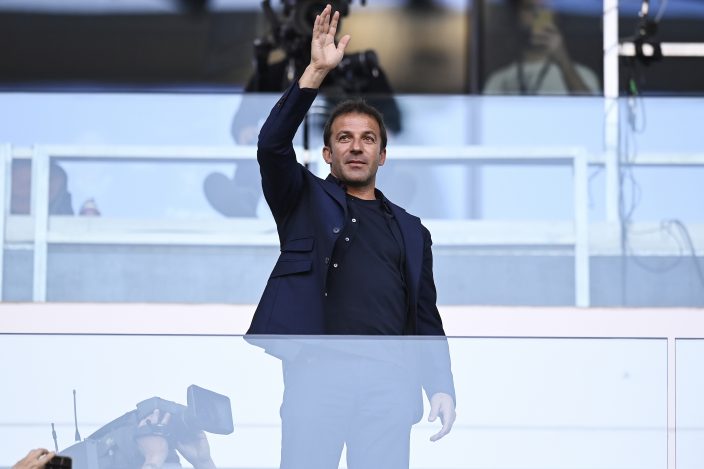 Italian soccer legend Alessandro Del Piero waves to supporters prior to the Serie A soccer match between Juventus and Bologna, at the Turin Allianz stadium, Italy, Saturday, April 16, 2022. (Fabio FerrariLaPresse via AP)

Fiorentina edged visiting Venezia 1-0 with a goal from Lucas Torreira to move up to sixth place and a potential spot in Europe.

The Viola have won three straight, six of their last eight, and are unbeaten in six consecutive matches.

Torreira scored from close range following a free kick after Igor Julio pulled the ball back from the end line. Torreira, who is on loan from Arsenal, also helped to set up a shot from Jonathan Ikone that hit the post. 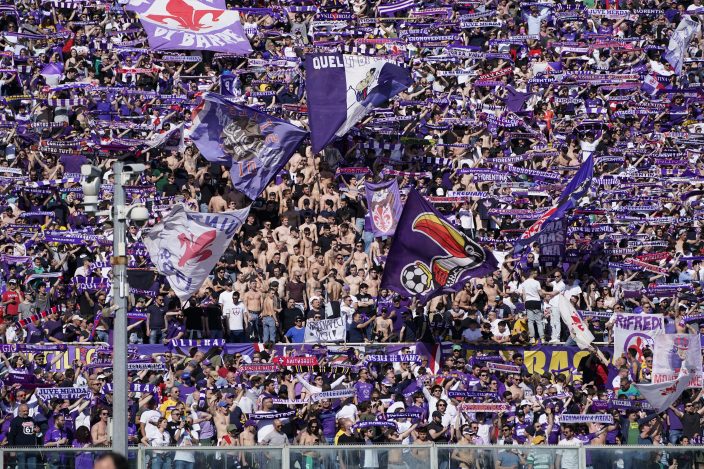 Fiorentina supporters cheer during the Serie A soccer match between Fiorentina and Venezia at the Artemio Franchi stadium in Florence, Italy, Saturday, april 16, 2022. (Marco BuccoLaPresse via AP)

Fiorentina moved one point ahead of Lazio, which hosted Torino late, and one point behind Roma. Having finished 13th last season after risking relegation at one point, the Viola are the most improved team in Serie A under first-year coach Vincenzo Italiano.

The Viola visit Juventus on Wednesday in the second leg of the Italian Cup semifinals.

Venezia remained in the drop zone after a seventh straight loss. 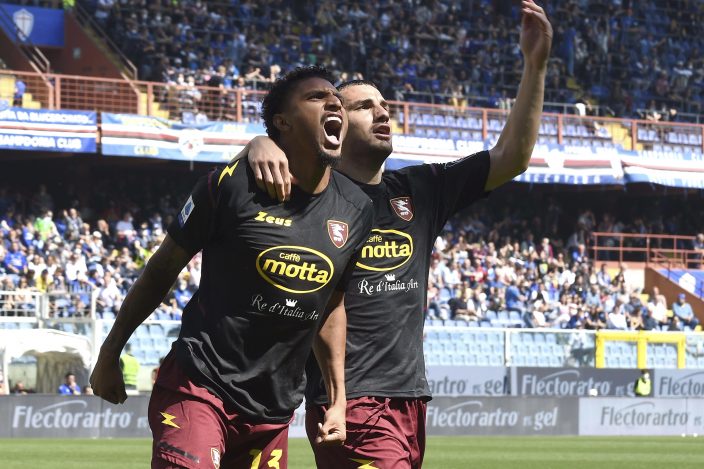 Last-placed Salernitana and 17th-placed Cagliari each ended rough periods with wins that could be key for avoiding relegation.

Federico Fazio and Ederson scored early for Salernitana to beat Sampdoria 2-1 and celebrate the southern club’s first win in more than three months. It was also Salernitana’s first win under Davide Nicola, who was appointed as the club’s third coach this season in February. 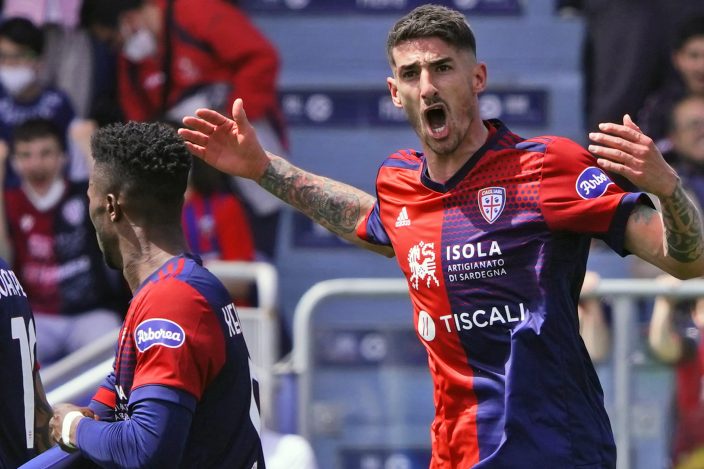 Cagliari's Alessandro Deiola celebrates after scoring his side's first goal during a Serie A soccer match between Cagliari and Sassuolo, in Cagliari's stadium, Italy, Saturday, April 16, 2022.  (Alessandro ToccoLaPresse via AP)

Salernitana remained in last place but moved within four points of safety with two matches in hand.

Alessandro Deiola volleyed in before the break as Cagliari beat Sassuolo 1-0 to end a run of five consecutive losses and move six points clear of the drop zone. 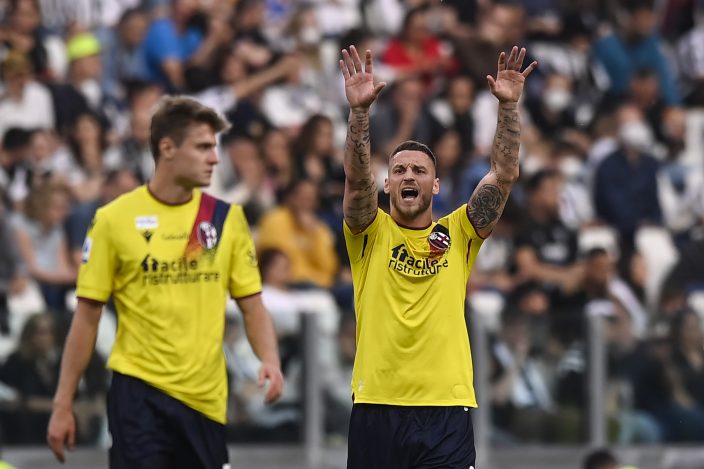 There are no games on Sunday due to the Easter holiday.