Complete the sale of Chelsea inside four weeks and the new ownership will have an FA Cup final to attend.

Who will be representing the club in the royal box at Wembley Stadium on May 14 is still to be determined.

As the three remaining bidders wait to discover if they are chosen to buy out sanctioned Russian owner Roman Abramovich, the west London club beat Crystal Palace 2-0 in the semifinals of world soccer's oldest competition on Sunday. The ownership contenders are, in part, being assessed on how much they will have to invest on player recruitment. The victory over Palace was produced by Ruben Loftus-Cheek and Mason Mount -- graduates of the Chelsea academy that benefited from Abramovich’s lavish investment.

Such is the challenge to break into the first team, both had to gain playing experience on loan elsewhere, including Loftus-Cheek at Palace.

The 26-year-old midfielder’s career was also stalled by rupturing his Achilles tendon in May 2019 and he hadn’t scored for the club since that month until breaking the deadlock against Palace in the 65th minute. It was Tyrick Mitchell being dispossessed that created the opening for Chelsea which ended with Kai Havertz’s attempted pass deflecting off Marc Guehi to the edge of the penalty area where Loftus-Cheek struck into the top corner.

Mount’s goal in the 76th minute came after playing a one-two with Timo Werner before having the time and space to shoot past Jack Butland.

A week that featured a Champions League quarterfinal elimination at Real Madrid ended on a high for Chelsea. 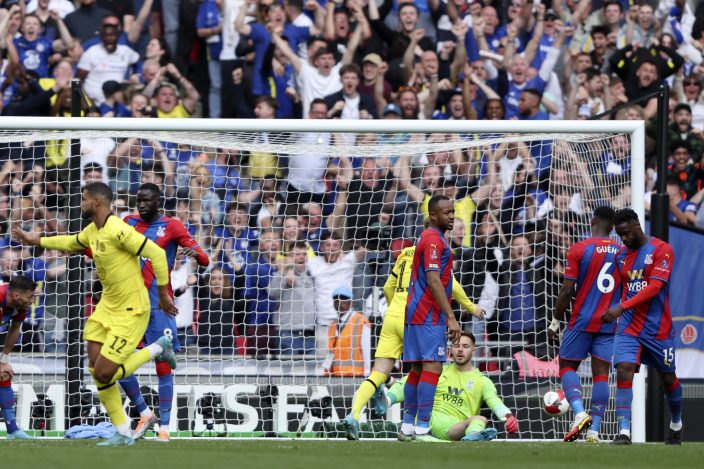 The Blues will be back at Wembley on May 14 to face Liverpool which beat them at the national stadium in the League Cup final in February.

Chelsea will also be contesting the Women’s FA Cup final at Wembley the following day, on May 15, after Emma Hayes’ side beat Arsenal 2-0 on Sunday to set up a meeting with Manchester City. There were two Premier League games on Sunday impacting the fight to avoid relegation.

Newcastle looks sure to survive after Bruno Guimarães completed a comeback by scoring his second goal in the fifth minute of stoppage time to clinch a 2-1 win over Leicester. The northeast side moved 12 points clear of the drop zone with six games remaining.

Burnley's first game since the firing of Sean Dyche on Friday ended in a 1-1 draw at West Ham. Burnley moved three points behind Everton, which is in 17th place and just out of the relegation zone with a game in hand.