After advancing in the Champions League and FA Cup over the past week on its charge for the quadruple, Liverpool turns its attention back to the Premier League title race when great rival Manchester United visits Anfield. What is historically the biggest fixture in English soccer has been dominated by Liverpool in recent years and the Reds are big favorites again for a win that would move them top of the league above Manchester City — at least for a day. Liverpool is a point behind City — which hosts Brighton on Wednesday — with seven games remaining for each team. It's a significant game for United, too, not just because it's Liverpool but because Ralf Rangnick's team is back in with a shout of a top-four finish after favorable results at the weekend. Fifth-placed United is three points behind fourth-placed Tottenham and tied for points with Arsenal in sixth. United midfielder Bruno Fernandes was involved in a car crash on Monday but was unhurt and is expected to be play against Liverpool. 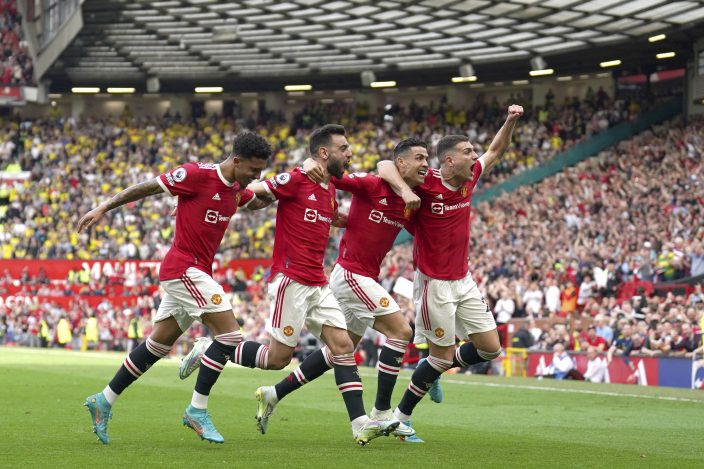 Involved in a tight battle for the Serie A title, Inter Milan and AC Milan resume their rivalry in the second leg of the Italian Cup semifinals. The first leg ended 0-0. Milan leads Serie A by two points from Inter. Milan hasn’t won the cup in nearly two decades — since 2003 — while Inter hasn’t gotten past the semifinals since winning the last of its seven titles in 2011. The Milan teams drew 1-1 in their first Serie A derby in November, then Olivier Giroud scored twice when Milan beat Inter 2-1 in their second league meeting. Defending champion Juventus takes a 1-0 into its return game with in-form Fiorentina on Wednesday. The final is scheduled for May 11.

Former Bundesliga heavyweight Hamburger SV can gain some consolation for another disappointing season in the second division by reaching the German Cup final with a win over Freiburg in their semifinal. Hamburg has been striving for a return to Germany’s top division since it was finally relegated in 2018 as the last of the Bundesliga’s founding teams to go down. It finished fourth in each of the following three seasons and is currently sixth, on course to miss promotion again. The German Cup has offered tonic for long-suffering Hamburg fans. Only around 25,000 bothered to attend the team’s last league games in the second division, but all 67,000 tickets have been sold for Freiburg’s visit. Hamburg last won the cup 35 years ago. It twice met Freiburg in the competition and won both times, in 1983 and 2007. Freiburg is enjoying a remarkable season, however, winning its last two Bundesliga games to climb to fifth and challenge for European qualification. Freiburg reached the German Cup semifinals in 2013 but didn’t reach the final. “I’m not there to dream,” Freiburg coach Christian Streich said. “I have a job to do with my work colleagues so that perhaps a dream can come true. We have to go to Hamburg with humility.” Last year’s beaten finalist, Leipzig, hosts Union Berlin in the other semifinal on Wednesday.

Real Betis tries to stay close to the Champions League places when it hosts Elche in La Liga. A win would put Manuel Pellegrini’s team even on points with fourth-placed Atlético Madrid and third-placed Sevilla. Betis is unbeaten in five league matches, since a loss to Atlético at home last month. Seventh-placed Villarreal hosts Valencia, while Mallorca hosts Alavés in a match between teams in the relegation zone. Mallorca is in 18th place and Alavés is last, four points from safety.