Jamal Murray found himself in the middle of things on the court — as a peacemaker, not a point guard.

In street clothes, the injured Murray, who hasn't played in more than a year, had to break up a squabble between Will Barton and DeMarcus Cousins during a timeout in the Nuggets' Game 2 loss at Golden State.

Water under the bridge, the Nuggets maintain. But it's a glimpse at how this series has gone for the Nuggets, who find themselves in a 2-0 hole as the series shifts to Denver for Game 3 on Thursday night. The Nuggets will try regain their composure not only against Stephen Curry and the Warriors, but with the officials and each other. 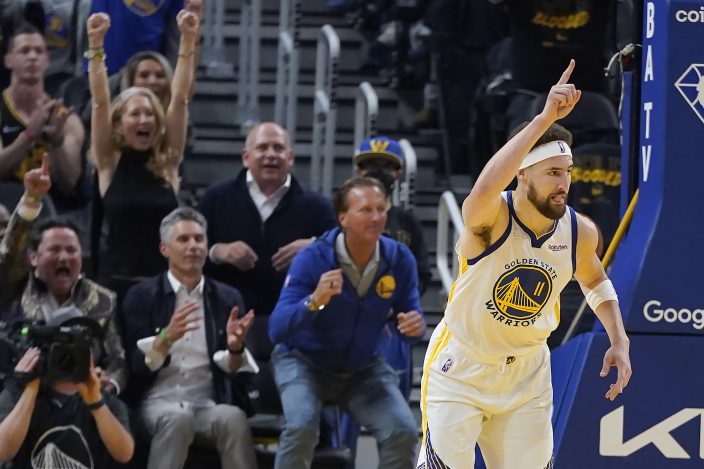 “It was all just out of frustration ... wanting to do better,” Nuggets guard Austin Rivers said Wednesday after practice. “We are desperate but we’re not going to play that way. We're going to go out there and play the way we play."

A healthy Murray would definitely help launch Denver. He’s been sidelined since tearing his left ACL last season. He’s been lighting up the nets during pregame workouts for several weeks now, and the team has said the decision to return remains in his hands.

Seeing him in street clothes night in and night out has flummoxed some Denver fans. 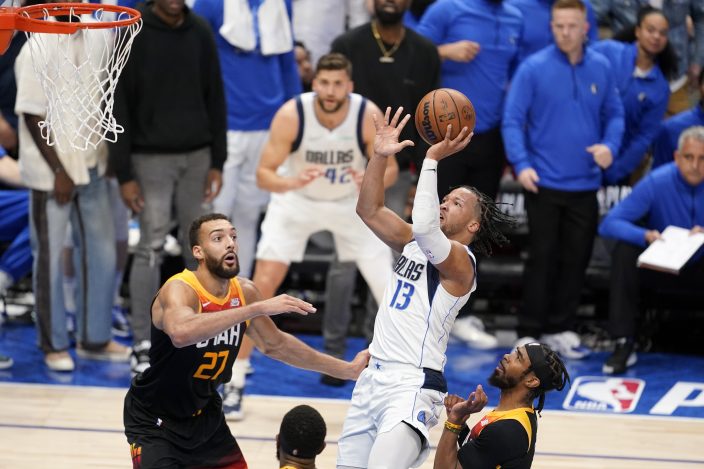 Murray took to social media this week to defend himself: “Y’all don’t think I wanna be out there huh.. crazy.”

“It’s killing him not to be able to go out there and help us,” Nuggets coach Michael Malone said.

Murray could certainly help on the perimeter and with stopping Golden State's “three-headed monster” — Malone's term — of Klay Thompson, Jordan Poole and Curry. 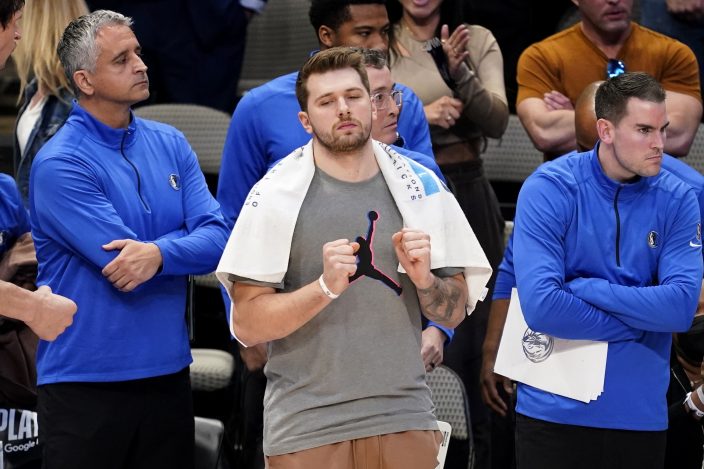 Dallas Mavericks guard Luka Doncic, center, reacts in the closing seconds of a win over the Utah Jazz in Game 2 of an NBA basketball first-round playoff series, Monday, April 18, 2022, in Dallas. Doncic did not play in the game as he is recovering from a left calf strain. (AP PhotoTony Gutierrez)

Reigning MVP Nikola Jokic lost his cool in Game 2. Frustrated over a lack of whistles, Jokic received a second technical in the fourth quarter and got ejected.

This all reaffirms one thing to the Warriors: Their style — lots of 3s, swarming defense — is getting into the Nuggets' heads. 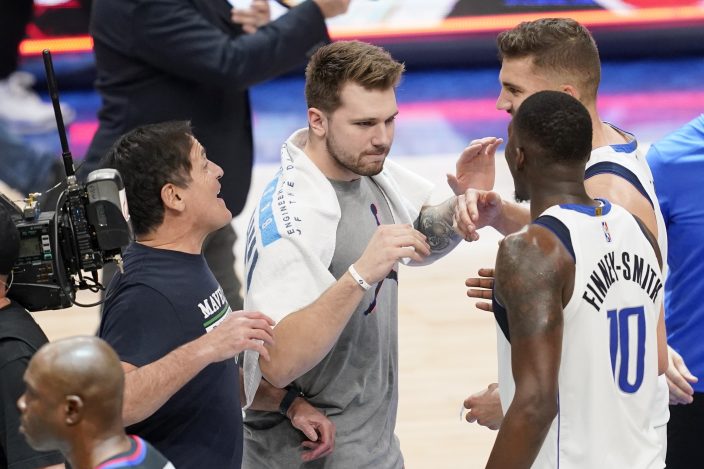 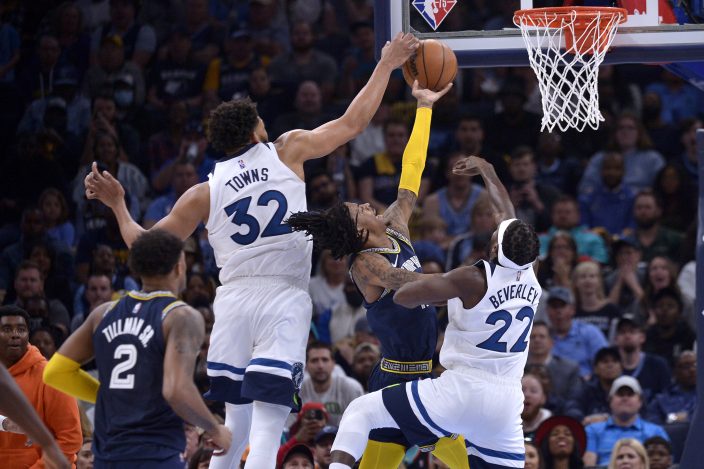 — NEED TO KNOW: The second quarter has been the pivotal point in both games. The Warriors went on a 18-4 run to close out the first half in Game 1 and a 26-8 spurt in Game 2.

— KEEP AN EYE ON: Barton and Cousins. They had a very public spat near the bench in Game 2. Monte Morris and Murray intervened. “We can’t let that happen in the series, in the playoffs, in the game," Barton said postgame. "I’ve got to be better than that.” 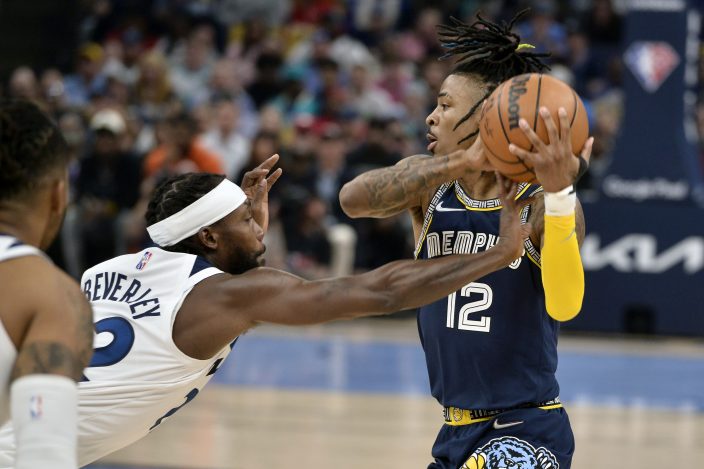 — INJURY WATCH: Curry has quickly found his form after missing a month with a sprained ligament in his left foot. Curry erupted for 34 points in nearly 23 minutes of action in Game 2. It might not be long before the Warriors move Curry from his sixth-man role to the starting lineup. It's hard to sub out Poole, who had another huge game. “Good problem to have," Green said.

— PRESSURE IS ON: Jokic, to keep his composure. He’s a finalist to capture a second straight NBA MVP award but this is two years in a row he's been ejected in the playoffs. “It’s so emotional — you just don’t want to lose, or you want to win, whatever it is,” Jokic said.

— NEED TO KNOW: Early foul trouble forced Memphis coach Taylor Jenkins to turn to Xavier Tillman Sr. off the bench late in the first quarter, and Tillman helped frustrate Karl-Anthony Towns. The All-Star center scored only six points over the final three quarters and made one trip to free throw line. He finished with 15 points after scoring 29 in Game 1.

— KEEP AN EYE ON: Ja Morant. The All-Star guard’s offensive skills are unquestioned. He’s also showing off his defensive skills so far in this series, holding the Timberwolves to 10 points on 4 of 19 shooting as the main defender.

— INJURY WATCH: Morant went to the locker room late in the third quarter after taking a knee to his left thigh working around a pick. He returned and said he took a knee to the other thigh in the opener.

— PRESSURE IS ON: Minnesota. Yes, the Timberwolves are back home and have home-court advantage in this series thanks to their dominating win in Game 1. But they missed layups and shot air-balls in knocking down 30 field goals — matching a season low. They were held to 96 points in Game 2, only the 10th time the NBA’s top-scoring team was held under 100. D’Angelo Russell is now 5 of 22 in this series. FanDuel Sportsbook lists the Grizzlies as a 1 1/2-point favorite.

— NEED TO KNOW: The Mavericks played nearly a perfect game to beat the Jazz 110-104 without All-Star guard Luka Doncic (strained calf). They got 41 point from Jalen Brunson and 25 more from Maxi Kleber. They turned the ball over just three times. Doncic is listed as questionable for Game 3. “Hopefully, it’s a green light," Mavs coach Jason Kidd said. "If it’s not, we’re prepared to go without him.”

— KEEP AN EYE ON: Rudy Gobert. The Utah center has grabbed 17 rebounds in each game of the series. He has just 13 total points, though, after averaging 15.6 points in the regular season.

— INJURY WATCH: Doncic. Everyone is waiting to see if he plays, including the Jazz. “He’s such a dynamic player that you have to,” Utah coach Quin Snyder said. "That said, I think planning for Dallas is more than just planning for Luka. They’re obviously an excellent team even when he’s not out there.”

— PRESSURE IS ON: Donovan Mitchell and the Jazz, who went 2-0 at home against the Mavericks this season. FanDuel Sportsbook has the Jazz as a six-point favorite.