The road back to the NBA Finals has become bumpy for the Phoenix Suns and Milwaukee Bucks.

Devin Booker strained his right hamstring Tuesday in Phoenix and Khris Middleton sprained his left knee a night later in Milwaukee, leaving both teams without one of their All-Stars.

That wasn't all they lost. Both teams went on to fall in those Game 2s and find themselves tied as their series switch sites Friday night. 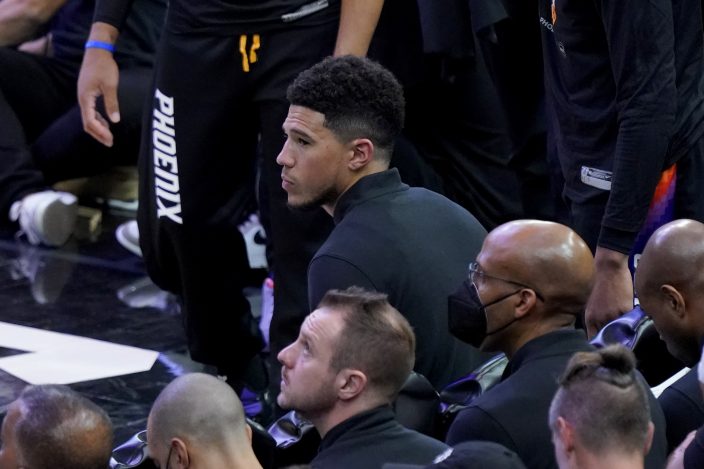 Phoenix Suns guard Devin Booker sits on the bench during the second half of Game 2 of an NBA basketball first-round playoff series against the New Orleans Pelicans, Tuesday, April 19, 2022, in Phoenix. The Pelicans defeated the Suns 125-114.(AP PhotoMatt York)

The Suns will be at New Orleans, while the Bucks make the short trip to Chicago.

Miami takes a 2-0 lead into Atlanta in the other game on the schedule Friday.

Milwaukee had to overcome the loss of Giannis Antetokounmpo to a knee injury last season during the Eastern Conference finals, winning the final two games against Atlanta in part because of how well Middleton played. 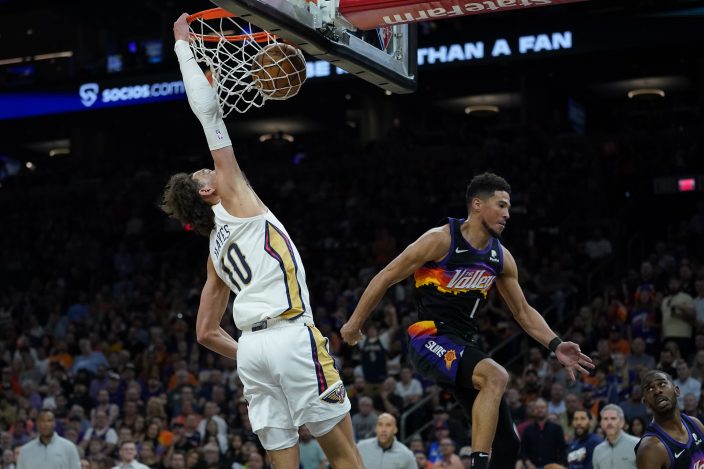 Now the Bucks will have to find a way without Middleton, who was undergoing testing Thursday to determine the damage to his medial collateral ligament.

“Obviously, it’s a challenge. We kind of know the deal now," Antetokounmpo said. "We’ve got to go and get one on the road. It’s going to be hard. Nobody says it’s going to be easy. But we know what the deal is. Khris is down. But we have a great team, talented team, tough team. Hopefully we can go out here and compete to the highest of our ability.

"Do we thrive in adversity? We’ll see. We cannot predict the future but hopefully we can be ready to compete in Game 3.”

Middleton and teammate Jrue Holiday flew with Booker to Tokyo last summer for the Olympics, just after the Bucks erased a 2-0 deficit in the NBA Finals to deny Phoenix its first NBA championship.

The Suns returned this season and soared through the best regular season in franchise history, rolling to an NBA-best 64-18 record. But they got just one win to open the postseason before Booker was hurt after scoring 31 points in the first half of Game 2.

Then the Pelicans, who had to win two play-in games just to make the postseason, rallied for a 125-114 victory behind 37 points, 11 rebounds and nine assists for Brandon Ingram.

The Suns played through Booker's absence because of hamstring trouble earlier in the season and a stretch without Chris Paul after the All-Star break because of a hand injury, so they also have experience having to get by without a star.

“We're going to need everybody throughout this deep playoff run that we hope that we have,” Paul said. “So it's been a season like that for us. Next man up. Guys stay ready.”

— NEED TO KNOW: Trae Young matched a career worst by shooting 1 for 12 in Game 1, then established a career high — of the wrong kind — by committing 10 turnovers in Game 2. Meanwhile, Jimmy Butler has been at his best for Miami and is coming off a playoff career-best 45 points in Game 2.

— KEEP AN EYE ON: Bam Adebayo and Tyler Herro. Miami is up 2-0 in the series without Adebayo and Herro doing much yet in the scoring columns. If the Heat get them going, Atlanta is in even more trouble.

— INJURY WATCH: Clint Capela (knee) is definitely out for Game 3 and seems unlikely to play in this series, no matter how long it lasts. His absence has been huge in the first two games of the series. John Collins (finger) has filled in and performed admirably, considering he can’t bend one of his fingers and the injury is so painful that he’s been noticeably wincing several times so far in the series. But without Capela and with Collins far from 100%, the Hawks aren’t themselves. “I don’t really have as much touch as I would like with my finger,” Collins said. “I’m doing the best I can.”

— PRESSURE IS ON: Young has to step up his game for the Hawks to have any chance against the top-seeded Heat. “I’ve got to be better,” said Young, who became only the second player in NBA history after Nate Archibald to lead the league in total points and assists. Young considers this a personal duel against Miami coach Erik Spoelstra, who has thrown out all sorts of defensive wrinkles to slow the Atlanta star. “Spoelstra is a top 15 coach of all time for a reason,” Young said. “He’s not going to let me just outscore ’em. He’s going to make it tough. It’s my job to try to out-think him in certain ways.”

— NEED TO KNOW: Chicago's 114-110 victory in Game 2 was just its second win in the last 19 meetings with the Bucks. Milwaukee's defense has to regain control of DeMar DeRozan, who scored 41 points, and Nikola Vucevic and Zach LaVine, who both had at least 20. All three shot terribly in Game 1.

— KEEP AN EYE ON: Bulls guard Alex Caruso. He missed nearly two months of the regular season after breaking his right wrist on a flagrant foul from Bucks guard Grayson Allen that resulted in an ejection and one-game suspension. In the first two games of this series, Caruso has revealed just what the Bulls were missing while he was away. Caruso’s defensive tenacity has bothered the Bucks, who have 36 turnovers in this series. Caruso had nine points and a season-high 10 assists in Game 2. The Bulls outscored the Bucks by 16 points in the 38 minutes when he was on the floor.

— INJURY WATCH: Bucks forward Bobby Portis left Game 2 with a right eye abrasion after taking a hit to the face from Chicago’s Tristan Thompson while both players were competing for a rebound late in the first quarter. Bucks reserve guard George Hill has missed the first two games of the series with an abdominal strain and isn’t expected to return anytime soon.

— PRESSURE IS ON: Holiday: Middleton's absence puts more responsibility on Antetokounmpo and Holiday to carry the load. Antetokounmpo has been as stellar as usual thus far with 30 points, 17 rebounds and 6 assists per game, but the Bucks need Holiday to take better care of the ball. Holiday has totaled 12 assists and 10 turnovers through the first two games.

— NEED TO KNOW: Losing Booker might be a problem but losing home-court advantage shouldn't for the Suns. They were an NBA-best 32-9 on the road — just four fewer wins than the Pelicans had total.

— KEEP AN EYE ON: The Suns' transition defense. Phoenix coach Monty Williams said it was about as bad as it's looked under him in Game 2, when the Suns had 16 fast-break points while shooting nearly 55% from the field

— PRESSURE IS ON: Mikal Bridges. Without Booker, the Suns are going to need more offense and will hope the Defensive Player of the Year runner-up is one of the players who can provide it, while also expecting him to lead a stronger defensive effort against Ingram.