The next speaker of the U.S. House could very well hail from California — not Nancy Pelosi’s slice of the Golden State, but the other California, Donald Trump’s California.

Rep. Kevin McCarthy is a son of the Central Valley, a farming and oil-pumping heartland that eagerly embraced the former president. A swath of rural conservatism amid California's progressive politics, it's where residents often feel ostracized, resented and left behind by their liberal neighbors in San Francisco to the north and Los Angeles to the south. 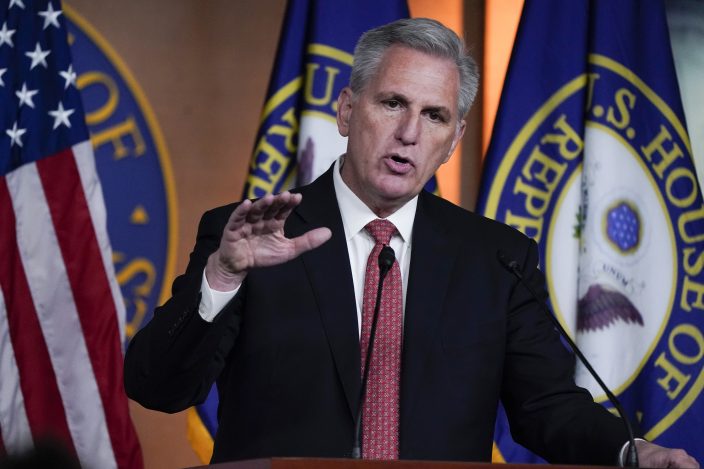 It’s here where McCarthy launched his political rise, from a young entrepreneur who set up a sandwich counter inside his uncle’s frozen yogurt shop to one of the more powerful Republicans in state and national politics. His career took off during the Trump era, when McCarthy was an early backer who understood the magnetic pull of Trump’s grievance-laden populism in drawing working-class people away from Democrats and into the Republican fold.

But this past week, McCarthy’s future as the party's leader in the House was thrown into jeopardy after audio was released of him telling fellow Republicans in the aftermath of the Jan. 6, 2021, insurrection at the U.S. Capitol that Trump should resign.

As McCarthy relies on Trump to help Republicans win control of the House in the November elections and seize the speaker's gavel from California Democrat Pelosi, the year-old comments raised new questions about their relationship and McCarthy's ability to lead a party still beholden to Trump.

“I don’t have to have the job,” McCarthy told The Associated Press in an interview last week in his district in the days before The New York Times released the audio of his 2021 remarks.

“You know, I’ve done what I’m going do. Now, it’s really what is the legacy you leave?”

McCarthy’s career in many ways reflects the arc of Republican politics, coming of age in the heady optimism of Ronald Reagan’s presidency and then shifting to align with Trump’s more hard-edged criticism of the status quo and Democratic policies.

But McCarthy's handling of the Capitol attack, especially as the House's Jan. 6 committee investigates his conversations with Trump that day, will emerge as a defining chapter of his time in Congress and, perhaps, his future as a leader. McCarthy had been critical of Trump immediately after the siege, which he called “un-American” and said was one of the saddest days of his career, before dashing to visit Trump at his Mar-a-Lago club in Florida to patch things up.

“He still has the bruises from that,” said Dave Noerr, the long-serving mayor of nearby Taft, a historic oil-drilling town. “He will wear those bruises for perpetuity. So that was a very tough lesson.”

The Trump years seem to have created a hangover in the Central Valley, where residents said they are tired of the politics and the fighting in Washington, and just want some relief from the stresses in their daily lives.

Inflation has sent gas prices sky-high, at nearly $6 a gallon, pushing the price of a fill up into triple digits for some. Crime remains a problem as the region struggles with population fluctuations and income inequality. The coronavirus crisis hangs over the community as it does elsewhere as the nation emerges from the pandemic.

Families watching kids at a weeknight Little League game held mixed views, with some believing McCarthy is part of the problem in Washington and others seeing him as a potential solution.

Garrilynn Dickerson, a respiratory therapist and mother of two who treated COVID-19 patients at a local hospital, said she just wants Republicans and Democrats to work together.

“Honestly, I just want unity,” said the independent voter who said she likes libertarian leaning Sen. Rand Paul, R-Ky., but also wants to see McCarthy reach out more to Democrats. “I don’t like the mudslinging.”

Despite its conservative roots, the place that's often called the Texas of the West is also changing. The once predominantly white population is fading as Latinos and other demographic groups gain in numbers. The Bakersfield City Council is working on new district lines to incorporate the growing Punjabi population.

Christian Romo, chairman of the Kern County Democrats, said the birthplace of the farm workers movement and the home to civil rights labor leader Cesar Chavez is coming into its own. As second- and third-generation immigrants become eligible to vote, their party allegiance is highly sought after by Democrats and Republicans working to boost numbers and turnout.

“We’re a red dot in a very blue county, but I keep telling people the blue wave is cracking through that red wall,” he said.

To prepare for the November elections, McCarthy is reaching back to the tools of another former Republican speaker, Newt Gingrich of Georgia, who won control in the 1994 election after presenting voters with the “Contract with America” list of GOP priorities.

McCarthy has tasked his rank and file with assembling its own list of priorities to present to the public this summer. He acknowledged his ideas are not being embraced by the other GOP leader in Congress, Sen. Mitch McConnell of Kentucky, who has said the election will be a referendum on President Joe Biden and Democratic policies.

“This is where Mitch and I disagree,” McCarthy said. “I think we have to lay out to the American public what you’re going to do ahead of time, because when the people go to vote, they vote for the agenda.”

Longtime Kern County Republican Party leader Cathy Abernathy, who first hired McCarthy as a young congressional intern a generation ago, said she is not convinced that Republicans will be able to win control this fall, despite outside analysis suggesting the election is theirs to lose.

“I don’t take it for granted,” she said.

It's not the first time McCarthy has reached for the speaker's gavel, having dropped out of a race abruptly in 2015 when it was clear he did not have support from hard-right lawmakers.

Yet it's not at clear that this time he will be able to do much better. The past several Republican speakers, including Gingrich and Reps. John Boehner of Ohio and Paul Ryan of Wisconsin, have all abandoned the job, chased out of town by restive rank-and-file lawmakers in their own party.

“Do I want to be speaker? Yes. But I don't have to be speaker,” McCarthy said. “My life will be fine one way or another.”