Trae Young is the unquestioned leader of the Atlanta Hawks.

Those three guys coming off the bench aren't too shabby, either.

Young hit the winning shot in Game 3 as Atlanta rallied from a 16-point deficit to beat top-seeded Miami 110-110, slicing the Heat's lead in the Eastern Conference series to 2-1. 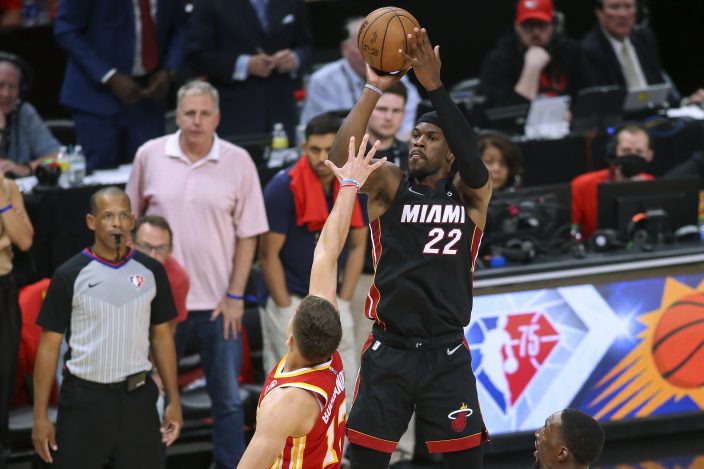 He got a big assist from Bogdan Bogdanovic, Delon Wright and Onyeka Okongwu, who all played the entire fourth quarter and were a huge part of the comeback.

The trio combined to score 21 of Atlanta's 34 points in the final period, taking some of the heat off Young and giving the Hawks a chance to even the series Sunday night in Game 4.

“When you've got multiple guys who can dribble and make plays,” Young said, “it makes it a lot easier for me.” 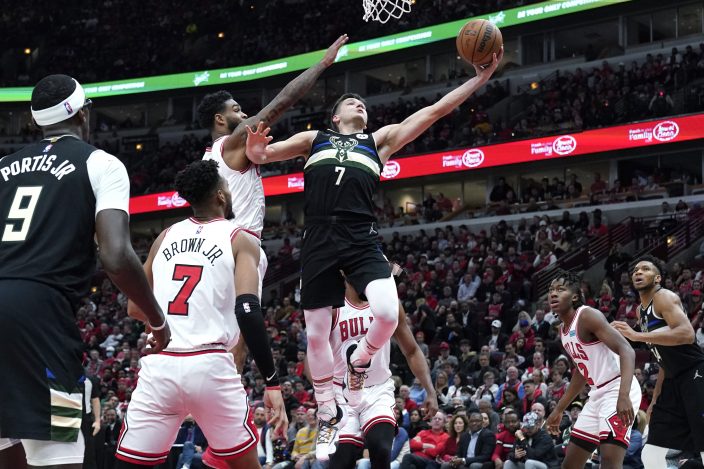 In other games Sunday, the reigning NBA champion Milwaukee Bucks look to build a commanding 3-1 lead over the Bulls after a Game 3 rout in Chicago, the West top-seeded Phoenix Suns go for a 3-1 lead over the New Orleans Pelicans and the Golden State Warriors try to complete a sweep of the Denver Nuggets.

The hot-and-cold Bogdanovic seems to warming up at just the right time for the Hawks. He had 29 points in Game 2 and followed up with an 18-point effort in Game 3 that included four 3-pointers.

“When Bogey gets hot like that, he's one of the best shooters in this league,” Young said. “He really sparked our offense.” 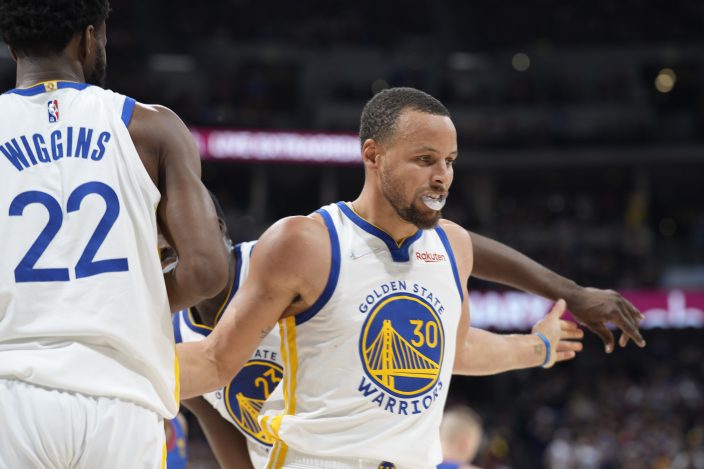 — NEED TO KNOW: The Bucks bounced back from a loss in Game 2 to dominate the Bulls 111-81 without injured Khris Middleton. It was the most lopsided home playoff defeat ever for Chicago. 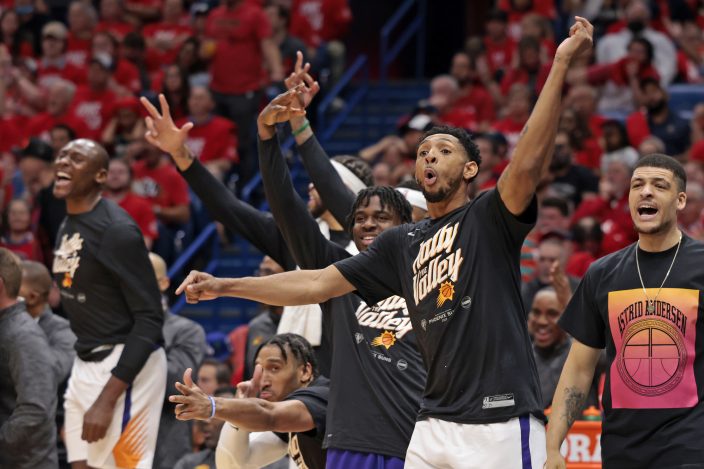 The Phoenix Suns bench reacts to a 3-pointer against the New Orleans Pelicans late in the second half of Game 3 of an NBA basketball first-round playoff series in New Orleans, Friday, April 22, 2022. The Suns won 114-111. (AP PhotoMichael DeMocker)

— KEEP AN EYE ON: Bucks F Bobby Portis had 18 points and 16 rebounds in a starting role with Middleton sidelined because of a sprained left knee. Portis did it despite pain in his right eye stemming from a hit to the face Wednesday by Chicago’s Tristan Thompson as they went for a rebound. It left him with an abrasion, forcing him to miss most of that game, and Portis wore goggles on Friday. “Just doing all the proper things I needed to do, taking all the proper medicines, hopefully it goes down,” he said after the game. ”Obviously, it hurts. You can see it’s still red.”

— INJURY WATCH: Middleton is expected to miss the remainder of this series after spraining his left MCL in Game 2. He is eyeing a return in the conference semis, assuming the Bucks get past the Bulls. G George Hill (abdominal strain) has missed the past four games.

— PRESSURE IS ON: DeMar DeRozan. The Bulls star went from setting a career playoff high with 41 points in Game 2 to scoring just 11 on nine shots with the Bucks crowding him. “DeMar didn’t get 41 in Game 2 on wide open jump shots with nobody near him,” coach Billy Donovan said. “There were guys hanging all over him when he made those shots. I think when DeMar doesn’t feel like he’s got to his spot or a good rhythm, he’s going to probably more often than not get off of it and pass it when he sees a crowd.” 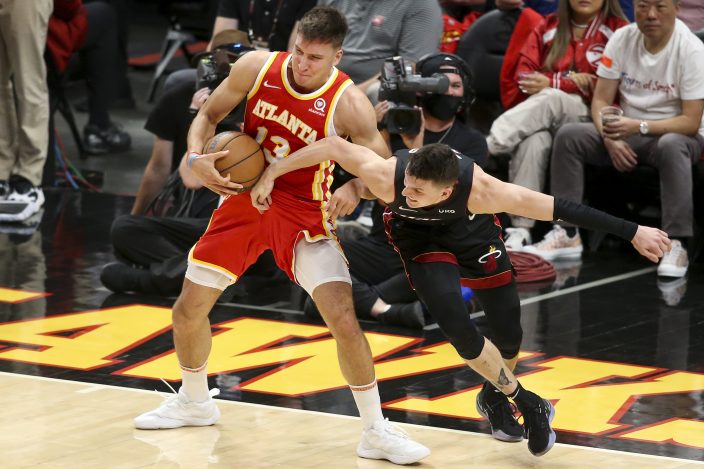 — NEED TO KNOW: With its Game 3 win in Denver, Golden State has now won at least one road game in each of its last 24 playoff series. The string began with a road victory in the Mile High City during the 2013 playoffs. No surprise, the streak mirrors the careers of Stephen Curry, Klay Thompson and Draymond Green. “We were so young at the time,” Thompson said of that win in ’13. “That was a huge series for us back there, just for our confidence. ... That was a very nostalgic feeling — life comes full circle being back here. I’m just so happy to have those memories.” 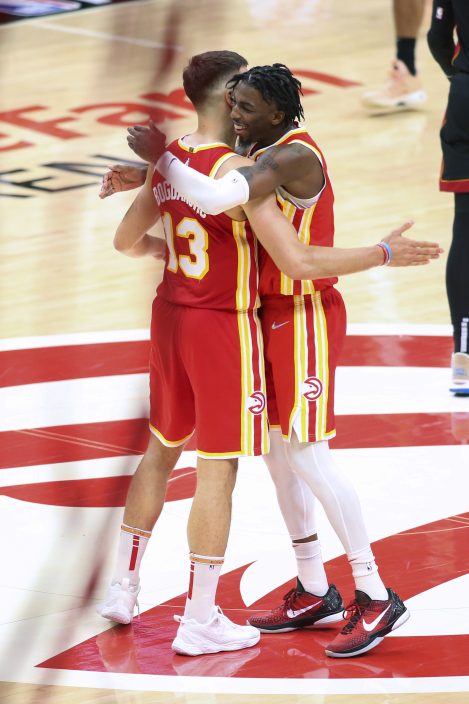 — KEEP AN EYE ON: Warriors G Jordan Poole. He has erupted for 30, 29 and 27 points, making him the 16th player in league history to score 25 or more points in their first three career playoff games, according to research by Elias. He’s also the second Warriors player to accomplish the feat, joining Wilt Chamberlain (1960). Poole, 22, is playing almost like a seasoned veteran. “I’m not going to give him all that much credit,” Thompson cracked. “It’s incredible what Jordan is doing. We need him to go where we want to go. We need him to keep doing what he’s doing.”

— INJURY WATCH: Green rolled his left ankle in Game 3 but stayed on the floor. Poole landed awkwardly on his left arm and used a heating pad on the bench. He returned, too. “Jordan’s doing fine,” coach Steve Kerr said after the game.

— PRESSURE IS ON: Nikola Jokic. How can it be anyone else? The reigning NBA MVP is in danger of being swept in a second straight playoff series. His message to his teammates was simple: “It isn’t over,” Jokic said. “As long as we put in effort like we did (Thursday), we’re going to be fine.” 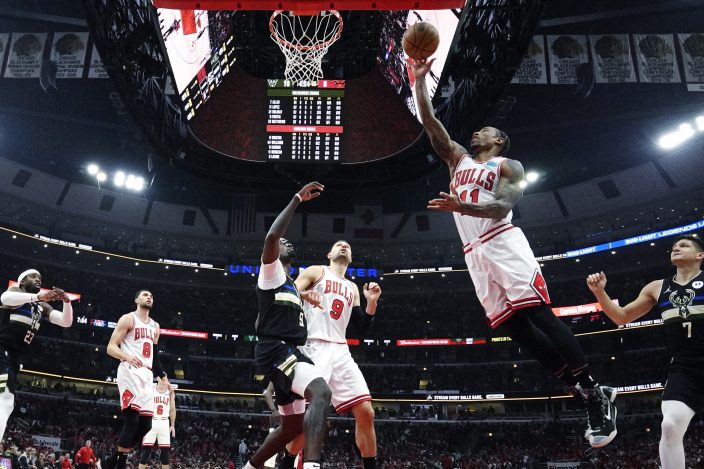 Chicago Bulls forward DeMar DeRozan (11) drives to the basket against the Milwaukee Bucks during the first half of Game 3 of a first-round NBA basketball playoff series Friday, April 22, 2022, in Chicago. (AP PhotoNam Y. Huh)

— NEED TO KNOW: The Hawks have become one of the league's best teams at home, a far cry from the days when the visiting team's fans often outnumbered the home team's. Atlanta has won 21 of its last 24 games at State Farm Arena, including six in a row. 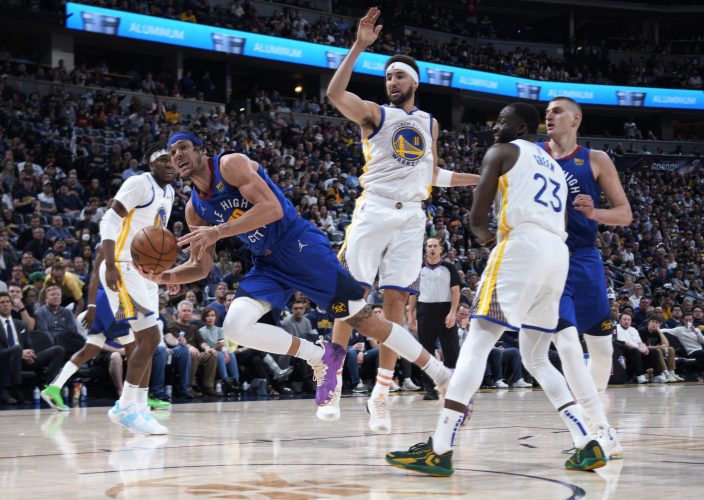 — KEEP AN EYE ON: Miami G Jimmy Butler. Coming off a career playoff-best 45 points in Game 2, he had a couple of chances to win Game 3 for the Heat. Butler missed them both, giving the Hawks a burst of hope in the series.

— INJURY REPORT: Heat PG Kyle Lowry went down in the third quarter of Game 3 with a left hamstring injury. “We love that guy as our point guard," Butler said. “If he’s with us, yippee-ki-yay. If he’s not, somebody has got to step in and do his job.” Miami will get no sympathy from the Hawks, who have been without C Clint Capela (knee) the entire series. John Collins has been filling in at the post, even though he's limited by a finger injury.

— PRESSURE IS ON: The Heat. After squandering a 21-0 run in Game 3, they missed a prime chance to go up 3-0 in the series. The Hawks are now in position to even things up if they can win again at home. Miami does not want this to turn into a best-of-three series against an underdog with nothing to lose.

— NEED TO KNOW: Things got chippy in Game 3, with Pelicans F Jaxson Hayes being ejected for slamming into Suns F Jae Crowder from behind in the second quarter. But the Suns say the shot inspired them. "I didn’t see the play, but the coaches told me it was one of those hits that you just don’t want to see in basketball,” Phoenix coach Monty Williams said. “We want to win the game, but not the fight.”

— KEEP AN EYE ON: Suns C Deandre Ayton. After scoring just 10 points in Game 2, Ayton tied his career playoff high with 28 points and added 17 boards. Williams said he “kicked himself” after Game 2 for not trying to get Ayton the ball more often in the paint. With Devin Booker out, expect Ayton to continue to be more involved in the Suns' offense.

— LATE NIGHTS IN NOLA: Even though New Orleans is known as a party town, the Pelicans don’t particularly appreciate leaving the arena after midnight. Sunday’s game starts a little earlier and veteran G CJ McCollum says that can’t be the Pelicans’ focus. “You’ve got to turn the page, learn from your mistakes, figure out where you can play better, but also look at all the things we’ve done well up to this point. Down 1-2, with a game to play at home, I’ll take that. Obviously, we’d have liked to win, but we’ve got a chance to even up the series in front of our fans."

— PRESSURE IS ON: The Pelicans. New Orleans doesn’t want to go down 3-1. The Suns regained home-court advantage despite the absence of Booker and shooting 4 of 26 from the 3-point line.

AP Sports Writers Andrew Seligman in Chicago and Pat Graham in Denver contributed to this report.